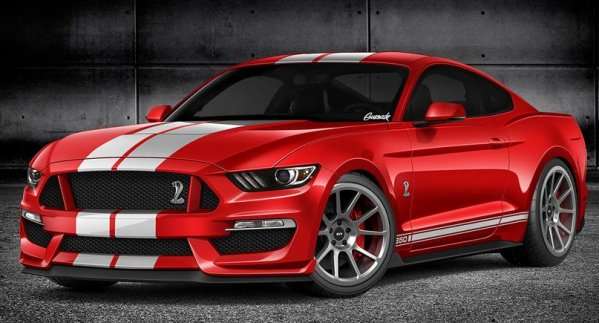 We know that the 2016 Ford Mustang Shelby GT350 is coming and while there is no official word from the Motor Company, an apparent slip of the tongue by an announcer during a recent Continental Tire Sports Car Challenge broadcast suggests that the next Shelby Mustang could debut at the Sports Car Challenge race on September 19th in Texas.
Advertisement

The recent spy photos and videos showing an obviously hotter-than-GT 2015 Ford Mustang lapping the Nürburgring all but verified that there is a higher performance next gen pony car on the way. At the same time, that presumed Shelby Mustang in Germany raised some questions, as the body looked a little too extreme to be a “normal” Shelby GT350 so some folks guessed that we were seeing on The Ring was either a Shelby GT350 with a performance package of some sort or the next generation Ford Racing Mustang race car – which is expected to be called the GT350R.

In any case, we know that there is some form of new high performance 2015 Ford Mustang coming and according to the announcer at last weekend’s Continental Tire Sports Car Challenge at the Brickyard, we will see the new 2015 Mustang race car in September at the Circuit of the Americas in Texas.

The September 19th On-Track Debut
During the Continental Tire Sports Car Challenge race at Indianapolis Motor Speedway last weekend, there was a short period of your typical announcer chatter during a round of pit stops. An announcer talking about the current Mustang FR500 race cars stated that” right now what’s in development is that GT350 race car for next year. We should see that car on the track later this September.”

The only event about which he could be speaking is the Circuit of the Americas stop for the Continental Tire Sports Car Challenge on September 19th in Texas so – based on what this track announcer knows – we should be seeing the first race car based on the 2015 Mustang at that event. Of course, it should be noted that he was most likely talking about the 2015 Ford Mustang GT350R race car that will compete in the Continental Tire Sports Car Challenge and a variety of other forms of road racing around the country…not the GT350 road car that so many Mustang fans around the country hope to park in their garage in the next year or so.

However, could Ford Racing really introduce the next generation Mustang race car, which will likely be based on the look of the new Shelby GT350 road car, without actually showing off the road car as well?

On one hand, I believe that introducing the next generation Ford Racing Mustang race car (known now as the FR500, seemingly to be soon known as the GT350R) alongside the Shelby GT350 road car at a racing venue would be a fitting backdrop for the debut- especially if the GT350 is the supreme handling machine that so many people expect. On the other hand, the Continental Tire Sports Car Challenge doesn’t have a huge draw in person or on television, so introducing the new Shelby GT350 road car wouldn’t have anywhere near the reach that it would at a big auto show.

Ultimately, it seems very unlikely to me that Ford would pick a Continental Tire Sports Car Challenge event for the debut of a car as significant as the 2015 Mustang Shelby GT350. Since they cannot realistically show off the race car without showing off the road car, I’m almost expecting that we will see the same heavily camouflaged Mustang test car that was caught in pictures and videos lapping the Nürburgring on display (or maybe running hot laps) at the September 19th Circuit of Americas event in Texas.

Image: Since there are no pictures of the actual 2016 Ford Mustang Shelby GT350, shown above is the rendering done by the skilled artists from Gurnade, as it is the best I have seen.