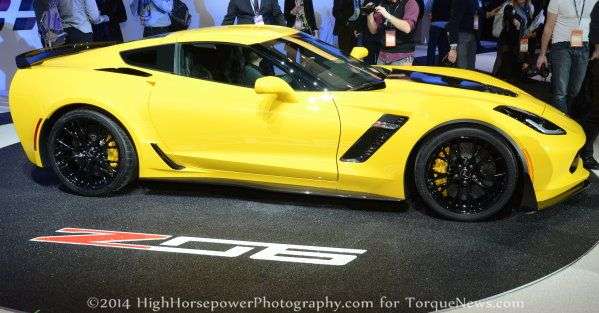 Back when we only knew that the 2015 Chevrolet Corvette Z06 would have “at least” 625hp and 635lb-ft of torque, GM brass stated that it would be priced similarly to the C6 Z06, but with the C7 Z06 likely beating the previous Corvette ZR1 in every day – I really have to question the idea of the new Z06 costing as much as the old Z06.
Advertisement

When the 2015 Chevrolet Corvette Z06 was introduced at the 2014 North American International Auto Show in Detroit’s Cobo Hall, we learned that it would be one amazing supercar – but we didn’t learn how much it will cost. However, Corvette boss Tadge Juechter was quoted as stating that if you could afford the C6 Z06, you will be able to afford the C7 Z06. This led many people to believe that the newest Z06 would have a similar price as the previous Z06 and frankly, I have a very hard time believing that when you consider how much improved the C7 Z06 is over the previous model.

2013 Chevrolet Corvette Z06 Pricing
The 2013 Chevrolet Corvette Z06 coupe was available in three trimlines, 1LZ, 2LZ and 3LZ. The “base model” Z06 had pricing starting at $76,595 while the 2LZ started at $81,255 and the top of the line 3LZ started at $85,455. It should be noted that nothing in the 2LZ or 3LZ packages add any performance as they both just come with long lists of high tech goodies and fancier trim throughout the cockpit. All of those prices included a standard manual transmission, the LS7 V8 with 505 horsepower and 470lb-ft of torque but those prices do not include Magnetic Ride Control or the Ceramic brakes, but adding the Z07 Performance Package to the C6 Z06 included those goodies and more for “only” $13,900.

In other words, while the C6 Corvette Z06 had a starting price around $77,000, getting similar goodies to the 2015 Z06 would have run you at least $91,000 and that still doesn’t include the monster power increase or things like the race seats or the Performance Data Recorder system. By the way, for the 2015 Corvette Stingray, adding the Competition seats adds $2,495 and pricing hasn’t been announced for the Performance Data Recorder system, but I would guess that it would add at least an extra grand. When you factor in those prices to the $91,000 figure for a C6 Z06 with the suspension, tires, wheels and brakes similar to those found on the new Z06, you are up around $95,000.

If you go a step further and consider the price hikes for the premium 2013 Corvette Z06 trim levels, adding the $17,500 for those goodies I mentioned above bring the price up over $100,000…and you still wouldn’t have paid a cent for the 650 horsepower LT4 engine.

A ZR1 for Z06 Pricing?
When considering the possible pricing for the 2015 Chevrolet Corvette Z06, we should consider a few things. First and foremost, the C7 Z06 is billed as the most track capable Corvette of all time and that means that it will beat the C6 ZR1 which set records all over the world. We should also keep in mind that the 2015 Z06 is closer to being an evolution of the ZR1 than it is an evolution of the C6 Z06. After all, the new Z06 literally features every aspect of the C6 ZR1 – from the supercharged V8 to the ultra light body and chassis to the high end braking system to the state of the art adjustable suspension package.

It Is All About the Wording
When Tadge Juechter said that people who could afford the C6 Z06 would be able to afford the C7 Z06, I believe that too many people just assumed that he meant that the new Z06 would cost as much as the base 2013 Corvette Z06. I do not think that Mr. Juechter was fibbing about the future prices, but rather it is all about technicalities. I believe that the 2015 Z06 will start towards the top end of the C6 Z06 pricing range and realistically, if you can comfortably afford to pay $90,000 for a lightly loaded 2013 Z06…you can most likely afford to pay a touch over $100,000 for many of the features of the C6 ZR1 plus the new look and the much more powerful LT4 engine.

I don’t believe for one second that Tadge Juechter’s comments about the price of the 2015 Chevrolet Corvette Z06 indicated that it would start in the $70k range. However, for the sake of gearheads everywhere, I hope that those who do believe that was what he was trying to imply are right as it will make these cars a whole lot more accessible.

Torque Johnson wrote on July 10, 2014 - 9:28pm Permalink
What about the statement from Tadge stating that even with all options, the 2015 Z06 will still be under $100k? Wouldn't this suggest an upper bound of $100k?
Matt wrote on July 10, 2014 - 10:15pm Permalink
Why not start a petition to raise the price of the Z06?? Let's write a whole lot of articles about how underpriced it is so guys like me cannot buy one! Please leave them alone, if GM wants to make an awesome car for a great price, how bout we just shit the heck up and place our orders!!
Pete wrote on July 10, 2014 - 11:18pm Permalink
I am expecting it to be around $120K. We all know that cars have MSRP prices (dealer profit) and invoice (cost). That being said, the next Z06 shouldn't cost more than $100,000. The MSRP price is going to be the actual mark-up that pushes the price over $100K.
Torque Johnson wrote on July 11, 2014 - 3:13pm Permalink
This is an excellent point Pete. This is what happened initially with the SRT Viper. Some dealerships were adding $30k to the MSRP. Hopefully, however, the new Z06 will be free of price inflation. Unfortunately, I think that price inflation will be a natural reaction of dealerships during initial sales.
Barry B Brannon wrote on July 26, 2014 - 3:39pm Permalink
Torque, if you are going to buy a new Z06 and worried about the dealer add on, I have purchased 8 vettes over time and I didn't want to even waste time about the ADM upcharge. if they ask for this and the market is a little slow - ask to read their franchise agreement with Chevrolet/GM and see how fast the ADM comes off the price. Just saying it worked for me.
Auto Motive wrote on July 15, 2014 - 5:14pm Permalink
For $75-80k I will buy the new hellcat challenger.
Donald, Ronald Mc wrote on July 27, 2014 - 10:45am Permalink
If this car begins to enter 100k -120k and up, then Chevy has defeated themselves! It would be up in the Porche range, and "you Senator Corvette are no Porche" it would exclude sooo many other possible buyers and put Chevy back where it was before the Gov bailouts, remember than Chevy recently announced all those recalls!
Ralph wrote on July 29, 2014 - 1:48pm Permalink
Well Patrick. let me ask this, how much better is the regular C07 vs. C06. According to the press, it was a significant improvement over the previous version. Before GM added a 2,000 mid year bump in base price (BTW, I thought that was outrageous, I've never heard of any auto company doing that), the base price of the C07 was only a few hundred dollars more than the C06. According to your math, the C07 should have been in the low to mid 70's. How does your theory apply to the C06 vs. C07, pricing? I think your logic my be just a little flawed.
Jose Pagan wrote on August 7, 2014 - 6:28am Permalink
I for one take Chevrolet at their word, that if you could afford the previous version of the car you can afford the up coming ZO6. It is important to look beyond the surface: Chevrolet has made many changes to how they make their parts such as their suspension corners including the brakes and now getting entire units from Brembo. They have improve how their carbon fiber components are manufacture. They have change how the car new aluminum frame is manufactured. Another interesting bit is the consolidation of the total car, thus minimizing production line work. This also reduces recalibrating cars because of options chosen. Additionally they have brought nearly all the manufacturing in house. The ZO6 fits in a particular place in terms of cost and thus number of units sold and profitability. I believe that the last production year of the car sold around 4k units which of course was at the end of the C6 run, but I am certain that the objective is to increase that number and cost to consumer is a major consideration. You can sell less for units for more or more for less. I believe that sweet spot is as described by Chevrolet, all options for less than $100K. jp
Andrew wrote on August 18, 2014 - 9:46am Permalink
At least we don't have to wait for long to find out. There are arguments on both sides. The ones saying how the car won't be the same price as the C6 Z06 certainly have validity. But technology improvements can go both ways - they can also bring prices down while adding features. Also, consider history. Remember the very expensive (for the time) "Lotus/Mercury Marine" ZR1 in the early 90's? Soon after it was introduced came an LT1 with 300 hp that was not so far off the 375 to 405 of the ZR1. Some would have said Chevy would never do that to ZR1 owners. We can only hope they want to sell more at a lower price.