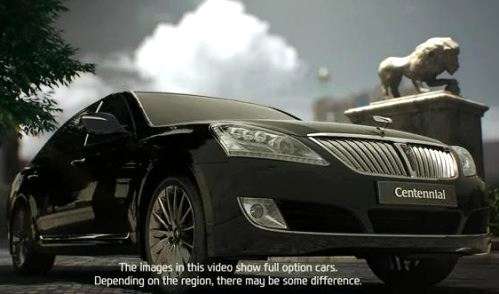 The refreshed 2014 Hyundai Equus will make its formal debut at the upcoming 2013 New York International Auto Show but thanks to a new company video, we get an early look at the new range topping Korean super sedan.
Advertisement

We got our first look at the 2014 Hyundai Equus (known as the Centennial in some markets) last week via a shadowy company teaser and while that didn’t offer much insight shy of a new set of wheels, this newer company video provides a pretty detailed look at the refreshed high end luxury sedan. As we could tell from the shadowy teaser image, the 2014 Equus is only lightly refreshed with the most significant changes on the outside being those new 18” turbine style wheels, a new grille fill design and new LED multi-unit headlight assemblies up front with revised LED taillights out back. Those are all smart changes and most importantly, the sleek, muscular design of the Equus is preserved for the 2014 model. While it is hard to tell whether all of this information will translate fully into the American version of the Equus, this new video reveals that the 2014 Equus will be available in six exterior colors – Sterling Silver, White Frost, Phantom Black, Hyper Metallic, Blue Baltico and Cona Black.

In addition to the exterior refreshed for the 2014 Hyundai Equus, the interior will receive some upgrades that further the impressive list of luxury features of this full sizes super sedan. This includes a card style smart key, a new shift by wire transmission control, a “premium clock”, a rear console mounted storage unit that can either heat or cool the contents, a gigantic thin film transistor (TFT) gauge cluster, a new rear entertainment system with dual screens and highlighting the new features is a 9.2” infotainment screen mounted high on the dash. It also appears in the video as though the “rear seat relaxation mode” allows for more range of motion from the passenger’s side rear leg rest. The current Equus offers the rear recliner system where the front of the rear seat folds out to convert into a foot and leg rest but, as you can imagine, there is some limit to how much you can really stretch your legs due to the proximity of the front passenger seat. In this new video, it looks like there might be more clearance so when you are being driven around in your 2014 Equus, you will have more room to kick back and relax. The 2014 Equus interior is available in three color configurations – Black, Two Tone Brown or Two Tone Crème and Beige.

I have often pondered what else the Hyundai Equus could possibly have in terms of interior amenities to make it more luxurious than it already is – and with the 2014 Equus preview video, the booming Korean automaker has answered my question. While the exterior refresh serves as more of a sprucing up, the interior changes appear to further the Equus’ charge at being one of the most plush, luxurious large sedans available in the United States. While this video does not touch on the drivetrain, rumors suggest that the Equus will continue to be powered by the 5.0L Tau V8 with 429 horsepower and that is A.O.K. with us.

The 2014 Hyundai Equus will debut at the 2013 New York International Auto Show later this month, at which point we can expect full details on the new super premium luxury sedan including the specifics on which new features will be offered here in the US.

We have included a gallery of images of the current Equus for reader reference.