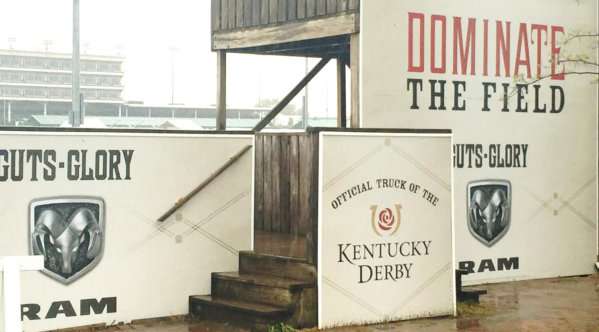 Ram is the Official Truck of the 142nd Kentucky Derby

The Chrysler Group has announced that for the 7th consecutive year, the Ram Truck brand is the official automotive sponsor of the Kentucky Derby and of Churchill Downs – the venue at which the legendary race is run. Saturday marks the 142nd Run for the Roses and the Ram Truck will be featured all over the grounds, giving fans at the race a chance to check out the newest Ram products in person while those watching on television will see plenty of Ram logos around the grounds, on the gate workers and even on some of the Derby jockeys.

“Ram trucks are the perfect match for horse owners, trainers and handlers, and being associated with America’s premiere racing events is a great way to illustrate our support for these customers,” said Mike Manley, Head of Ram Brand, FCA – Global. “With best-in-class towing of 31,210 pounds, best-in-class payload of 7,390 pounds, and best-in-class torque at 900 lb.-ft., plus a wide-range of special features including trailer tow technologies, Ram has the most capable trucks on the market to make the lives of horse people easier and safer for towing their horses.”

The Official Truck of the Derby
As the Official Truck of the Kentucky Derby and Churchill Downs, the Ram Truck brand will be on display all over the grounds of this weekend’s event. Ram signage will be scattered around the grounds for all to see, including plenty of logos that we will be able to see during the TV broadcast. There will also be Ram videos showing on the huge Churchill Downs screen along with two different vehicle displays – one with a new Ram Rebel and another with the Ram 1500 Limited and the Ram 3500 Limited. In both cases, attendees can have their pictures taken in the displays while getting unspecified ‘freebies’…and everyone loves free goodies.

Next up, a Ram ProMaster will be used to transport the blanket of roses to the winner’s circle and the Ram logo will be displayed on the guys loading the horses into the gate – as well as on the pants of some of the jockeys in the race. Since the majority of people “watching” the race only actually pay attention during the running of the Derby itself and the few minutes leading up to the starting bell, the branding on the gate workers and the jockeys are key for the company.

Finally, the Ram brand will air two new 30 second commercials during the telecast of the 142nd Kentucky Derby, one titled “Truck People – Derby” and a second titled “Never Settle”. Truck People – Derby is available on the company’s YouTube channel and we have embedded it below. Never Settle is not on their YouTube channel yet, so perhaps they are going to keep that one in their pocket until it debuts on TV. Also, as a special bonus, Ram has put together a quick on-horse video showing a jockey John Byrne riding Garden Goddess around the Churchill Downs dirt track…the same one which will host the Derby.

My Official Predictions
While I am an autowriter, I am also a horse owner and an active horse racing fan. I happen to use a Dodge Ram 1500 to pull my own horse trailer so having the Ram brand sponsor the Derby brings together two of my interests. This also gives me a chance to post my prediction for the 2016 Kentucky Derby.

Right now, Nyquist is the odds-on favorite at 3-1 and barring any issues with the horse, I don’t expect to see any other entries edge him out before Saturday’s race. Nyquist is named after Detroit Red Wings player Gustav Nyquist, so with the Motor City connection, many people around Detroit are pulling for him to win. However, I grew up in Pittsburgh, I’m not a Wings’ fan and I don’t like picking the favorite. With that in mind, I’m going to go with Gun Runner (10-1) as my pick to win the Kentucky Derby.

The 142nd Kentucky Derby broadcast runs all day long on Saturday, but the official post time is 6:34pm EST. In the meantime, check out the ridealong video and the new Ram Truck commercial below.