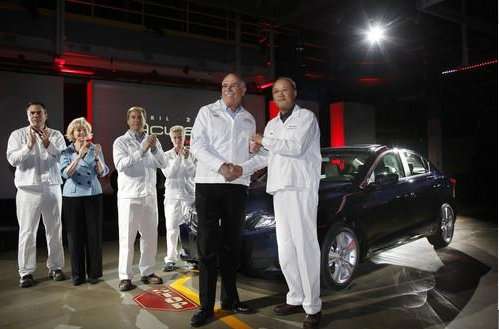 Production of the 2013 Acura ILX begins in Indiana

Yesterday, Honda Manufacturing of Indiana celebrated the start of production for the new 2013 Acura ILX – a sporty new compact luxury sedan that shares a platform with the Honda Civic and should help the Acura brand reach new customers thanks to a lower price point compared to the other current Acura models.
Advertisement

The 2013 Acura ILX and ILX Hybrid are built on the same platform as the Honda Civic sedan so it makes good sense that the ILX would be built alongside the popular compact Honda at the Honda Manufacturing of Indiana assembly plant. The 2.1 million square foot Greensburg Indiana plant is currently slated to be the sole production point of the ILX and ILX Hybrid while continuing to build the Civic sedan both for the North American market and for export to other global markets.

"Acura has a sparkling reputation and we are thrilled to build the gateway vehicle to this brand at our Greensburg facility," said Jun Nishimoto, president of Honda Manufacturing of Indiana. "As the exclusive builder of the ILX, HMIN has a big responsibility. Our associates meet this challenge by working together as one team and today we are ready for our customers to share our pride in this beautiful new product."

The 2013 Acura ILX will serve as the entry level for the Japanese luxury brand, entering the popular C segment sedan class with a base price of just $25,900 plus the destination fee of $895. The next least costly Acura product is the 2012 TSX sedan which carries a starting price of $30,905 (including destination), so prospective Acura owners can get into the new ILX for about $5,000 less than the current “entry level” model.

"This all-new Acura luxury sedan is closely linked to the future of Acura," said Jeff Conrad, vice president and general manager of Acura for American Honda. "Just as the Acura ILX is the gateway to the Acura brand, Honda Manufacturing of Indiana is a gateway to Acura customers."

While the 2013 Acura ILX Hybrid won’t serve as one of the brand’s least expensive models but with a price of right around $30,000 – it is one of the more affordable hybrids in the luxury segment. The ILX Hybrid is the first hybrid from the Acura brand, the first hybrid vehicle from Honda to be built in the US and the first Acura model to be built at the Greenburg Civic plant. Most importantly, the 2013 Acura ILX is the lowest price luxury sedan in the American auto industry so it could be a very enticing product for young buyers who want a luxury car without the luxury price.