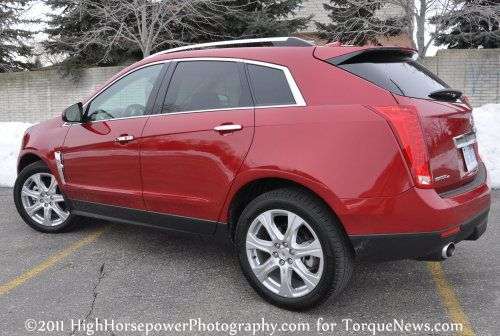 The 2011 Cadillac SRX Turbo AWD Premium package includes pretty much everything that you could possibly want including the monstrous dual panel sunroof and monitors in the rear of the seatbacks.
Advertisement

Interior
Climbing into the SRX, there is no question that this is one of the best-selling luxury SUVs on the market and it is very clear why. The luxurious leather seats provide living-room comfort with power adjustments for the driver and passenger with heated surfaces helping to toast your buns on a chilly morning. Rear riding passengers also get heated seats along with their own set of controls for the rear climate zone.

My 2011 Cadillac SRX Turbo AWD Premium came with a two-tone brown layout with light beige seating surfaces, door panels and carpeting accented by the darker brown steering wheel, dash cap and upper door panels. Brushed silver trim is added on the center console, around the HVAC/stereo controls, around the vents and around the 3-pod gauge cluster to add a subtle, luxury feel. Everywhere a driver or passenger might regularly touch inside of the 2011 SRX Premium like the door-mounted and center console armrests feature a soft, padded surface with more soft surfaces across the face of the dashboard.

The back of the plush leather front seats feature flip-up monitors controlled from the dash-mounted infotainment unit with rear headphone jacks with controls for the rear-riders to alter the volume on their own. This is a great feature for someone with kids (we found out that simple plug-and-play video games also work with the auxiliary jack) to keep the little ones occupied on long road trips. Its also nice to be able to drive the missus to the mall and sit in the parking lot and watch a movie in the comfort of the SRX with a crystal clear monitor and high quality sound. One of my favorite features (as well as a favorite feature of my family during our time in the SRX) is the huge UltraView sunroof that gives both the front and rear passengers a look at the stars at the push of a button.

When it comes to roominess, the 2011 Cadillac SRX doesn’t disappoint. The rear seating area provides plenty of headroom for even the very tall and there is lots of leg room without squashing the driver or front passenger against the dash. The rear cargo area offers tons of space and the floor-mounted storage rail system allows you to move the aluminum rack to help prevent items from sliding around. The floor of the cargo area lifts up to expose an extra underfloor storage area and a roll-away “tonneau cover” provides security in case you don’t want people seeing what you have in the rear cargo area of your 2011 SRX.

The Drive
The base engine of the SRX is a 3.0L V6 but my SRX test vehicle was equipped with the 2.8L turbocharged V6 and starting with the 2012 SRX, both engines will be dumped in favor of the 3.6L V6 found in the Chevrolet Camaro. General Motors’ reason for killing off both engines in place of the standard 3.6L V6 was that the new naturally aspirated V6 is more power and more efficient than the outgoing 3.0L engine and a whopping 90% of SRX buyers opted for the entry level engine. With a take rate for the 2.8L Turbo engine of just 10%, GM found that it wasn’t worth the costs to keep offering this turbocharged mill.

However, after spending a few thousand miles behind the wheel of the turbocharged AWD SRX, I am sorry to see this option leaving the lineup after this year. The naturally aspirated 3.6L V6 that will be offered next year offers the same 300 horsepower as the current 2.8L turbo V6 but the new engine will be a little shorter on torque compared to the turbo engine. In short, those 90% of the buyers who picked the standard 3.0L V6 don’t know what they are missing even though they saved roughly $7,000 going with the less powerful engine option. The 3.0L V6 offers an estimated 18 mpg around town and 25 on the highway while the 2.8L turbo option receives ratings of just 15 and 22. During my time in the SRX Turbo AWD, I observed fuel economy levels in the range of 19-20mpg over the course of several tanks of gas and I drove this turbocharged SUV like a turbocharged sports car – both on the twisties and on the open road – and I loved every minute of it. That being said, it seems to me that for someone who drives a bit more conservatively with similar highway-heavy driving habits, they may be able to exceed the EPA estimates.

When you fire up the 2011 Cadillac SRX Turbo, it sounds like a performance vehicle. The dual exhaust offers a low grumble that escalates to a pretty fair roar at wide open throttle but it does so without any cruising drone or exhaust noise when you are creeping around the subdivision. The 2.8L turbocharged V6 produces 300 horsepower and 295lb-ft of torque, with little enough turbo lag that the average driver wouldn’t notice it – even when they are roaring away from a stoplight. Speaking of that, the SRX has acceleration that makes you forget that you are in a roomy SUV with the ability to sprint from a dead stop to the triple digits with impressive urgency while the 6-speed automatic transmission provides smooth, seamless shifts.

Regardless of the road conditions, the 2011 Cadillac SRX Turbo AWD Premium suspension offers the smooth, quiet ride that you would expect from t modern luxury vehicle but this same suspension provides a firm grip under moderate cornering and amazing stability – even at very high speeds – on the open road. The SRX feels surprising light and nimble in close quarters and this sporty SUV cruises comfortably and effortlessly well above any posted speed limit in this country.

I loved every minute that I spent in the 2011 Cadillac SRX Turbo AWD Premium and while I’m disappointed to hear of the demise of the 2.8L turbocharged V6, the promise of the same 3.6L V6 that powers the base model 2011 Chevy Camaro promises to help keep the “sport” in SUV. The SRX ranks high in “fun to drive” ratings while also packing pretty much anything that a driver or passenger could want out of a high end luxury sport ute. It provides the comforts and driving dynamics of a sport sedan with the abilities of a sport utility vehicle – making it very clear why this is one of the best selling models for General Motors.