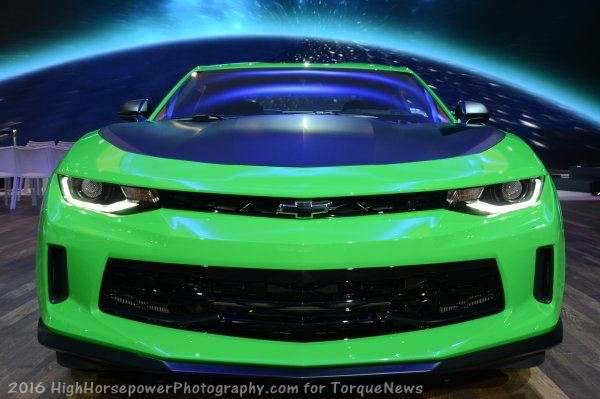 No All-Wheel Drive Camaro on the Way

Over the past few weeks, we have received a few questions from readers regarding the possibility of an all-wheel drive Chevrolet Camaro and fortunately, Camaro chief engineer Al Oppenheiser recently commented on that very topic at the Chicago Auto Show – stating that there would be no all-wheel drive Camaro while he is overseeing the vehicle.
Advertisement

The 2016 Chevrolet Camaro is built on the same chassis platform as the Cadillac ATS coupe and I believe that similar chassis – and the fact that the ATS is offered with all-wheel drive – caused this internet rumor to come about. It seems to me that the discussions of an all-wheel drive Camaro popped up when the Dodge Challenger was shown off with all-wheel drive at SEMA, at which point Camaro fans pointed out that all-wheel drive seems far more likely. After all, the drivetrain architecture is already in the company portfolio and, best of all, it fits in the chassis!

It seems like something that could work, but would General Motors ever do that? The Camaro has always been one of the ultimate rear wheel drive performance cars – would the company really stray that far from the muscle car mentality?

It seems that the answer is a resounding “no”, according to Camaro chief engineer Al Oppenheiser.

No AWD, Diesel or Hybrid Camaro
While speaking with AutoGuide at the Chicago Auto Show, Oppenheiser stated that while “he has the keys” to the Camaro program, we shouldn’t expect to see an all-wheel drive Camaro, nor will we see a Camaro with a hybrid or diesel drivetrain. I am not particularly surprised to hear that there are no plans for a diesel Camaro, although Chevy has a great small diesel in their arsenal with the Cruze diesel package. I am also not surprised to hear that Oppenheiser take the hybrid discussion off of the table, since GM has put far more emphasis into their EV program than their hybrid program.

Dodge has already shown that they can build an AWD Challenger using all in-house components in a modified Challenger chassis. The Chevrolet Camaro is built on a chassis that already has a similarly sized all-wheel drive car, so GM seems like the frontrunner to roll out a muscle car that will spin all four wheels – but with Oppenheiser saying “no”, it looks like the Cadillac ATS coupe will be the only answer for GM faithful who want a sporty, all-wheel drive coupe.

tom h wrote on February 27, 2016 - 9:07am Permalink
And what about the ZL1/Z28 models? Are they in the future or what?
V wrote on July 5, 2016 - 2:46am Permalink
How about making awd as an option for people who have Harsh weathers like Rain/Snow etc.. The company will then get more $ from this expansion.
shelby wrote on January 28, 2017 - 8:19pm Permalink
I agree Come on make a Camero in a AWD!! I want one so bad. However I live in Colorado and I have to drive to work. I hate trucks and SUVs so poo don't even go there. I want a Cameron in a AWD and I don't seem to be alone! Just make one so we all will buy it_:-)
Smackeroo wrote on August 25, 2018 - 2:32pm Permalink
GM will build an AWD Camaro, count on it. But they will do it after Ford offers an AWD Mustang and it breaks sales records.
Joe wrote on May 10, 2019 - 6:28pm Permalink
Please make an all wheel drive Camaro. I have to drive in the snow. I would buy one now. Any 2 door car with front wheel or all wheel drive would be great also.