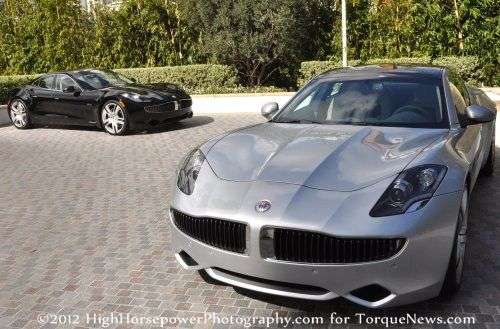 The National Highway Traffic Safety Administration has sent investigators to look into the charred remains of a garage in Sugar Land Texas that has been blamed on the brand new Fisker Karma parked in the garage – marking the latest step in the NHTSA’s ongoing probe into the long term safety of electric vehicles packing lithium ion batteries.
Advertisement

Shortly after reports surfaced that the Sugar Land Texas garage fire was started by a new Fisker Karma, many began speculating as to how the electric luxury sedan may have caused the inferno. The local fire chief investigator was quick to point the finger at the Karma as the origin of the fire and that set critics of the electric vehicle segment in motion, insisting that the high voltage battery system was at fault.

Experts have speculated that while the fire may have originated in the Fisker Karma, it might not have anything to do with the electrical drive or battery system. Like many modern engines, the Karma’s gasoline engine is shrouded in useless plastic cladding intended to make the engine prettier. Also, the engine bay of the Karma is packed tight, with minimal routing for exhaust possibly causing extremely high temperatures around the engine. Should some component of the aesthetic plastic shrouding around the engine have managed to make contact with some component of the exhaust system – that definitely may have been enough to start a small fire. Once a small fire begin in the engine bay and the car is left unattended, there is an endless supply of other flammable materials under the hood of any car (not just the Karma) that can contribute to turning a small fire into a towering inferno.

The National Highway Traffic Safety Administration has been keeping a close eye on any problems including a lithium ion as more and more automakers begin to use these high voltage and high tech batteries. The NHTSA initially looked into the safety of these systems after having several Chevrolet Volt batteries catch fire at controlled testing facilities but after GM made some alterations to the Volt – the investigation was ended with no other required actions. Around that same time, Fisker recalled their models to perform similar safety procedures while also addressing some battery problems with the units provided by A123.

Should the NHTSA find that there was indeed some component of the Fisker Karma that caused the garage and house fire in Texas that claimed the Karma, an Acura NSX and a Mercedes Benz SUV – the US safety agency will likely look deeper into the Karma to see if this is something that could happen in other vehicles or if this was an isolated incident. If there is found to be some flaw that increases the risk of this type of fire…we can be sure that there will be a government required recall of the high end luxury electric sedan.

Anonymous wrote on May 20, 2012 - 6:57pm Permalink
Electric cars are just not "there" yet...my bet is we have enough $2 gas, til the end of the century anyway... until some better technology comes along that people want, cold fusion,hydrogen or something else. To pay $40k fora volt is just plain stupid.

LG's New EV Battery Plant Is a Welcome News for Tesla
Tesla Giga Berlin's New Hurdle: It's Not Only the Gov't, but Now Tesla Itself
END_OF_DOCUMENT_TOKEN_TO_BE_REPLACED