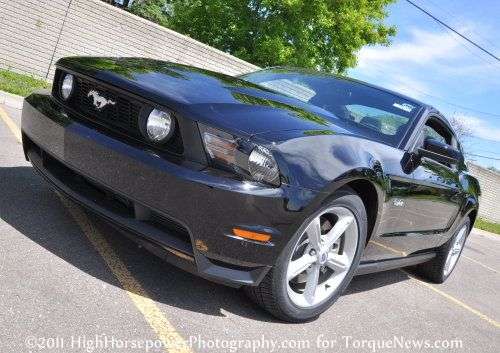 Next Gen Ford Fusion production could save the Ford Mustang facility

Rumors have been swirling that the Ford Mustang would be leaving its current home in Flat Rock, Michigan when the Mazda6 sedan moved production to Japan but thanks to the new Ford/UAW contract, it looks like the next generation Ford Fusion will be built alongside the Mustang – saving the production facility of the fabled pony car.
Advertisement

The Auto Alliance plant in Flat Rock, Michigan is currently the home of the Ford Mustang and the Mazda6 sedan and it has been for some time, as Ford and Mazda have worked together for years to build both joint models like the Ford Probe along with separate models like the current Mazda6 and Mustang. However, Mazda announced earlier this year that they would be shifting production of the Mazda6 into Japan which would leave the Mustang to have a stable of its own. The only problem with that idea is that the Mustang does not move enough units to keep a production facility the size of Flat Rock up and running. The combined production of the Mazda6 and the Ford Mustang keep Flat Rock busy but rumors suggested that without Mazda, Ford may need to move the production of the Mustang somewhere else.

However, reports indicate that as part of the new 4 year contract between Ford Motor Company and the United Auto Workers union, FoMoCo will use the Flat Rock plant as an overflow point for the next generation Ford Fusion sedan. The Fusion is among Ford’s bestselling models along with being one of the bestselling vehicles in the US market so the production of the 2013 Ford Fusion in Flat Rock could see between 75,000 and 125,000 units built annually depending on the reception of the next generation sedan. If these figures prove to be realistic, the Flat Rock plant could be building between 6,250 and 10,417 Ford Fusion sedans each month so the production of the Fusion could actually exceed the number of units sold by the Mustang or the Mazda6, currently. Mazda built just under 10,000 Mazda6 sedans in August 2011, while Ford offered up 5,054 Mustangs in September 2011 so if the Fusion proves to be popular enough, Flat Rock could actually be better off building the Mustang and Fusion.

The current Ford Fusion is built at Ford’s Hermosillo Stamping & Assembly plant in Mexico but with the tentative labor agreement between Ford and the UAW, the automaker has promised to add or secure 12,000 jobs in America. Other plants around the country will benefit from investments intended to add to secure jobs but for those employed by Ford Motor Company at the Flat Rock Auto Alliance plant, it looks like the Mazda6 sedan heading for Japanese production could prove to be a good thing with the introduction of overflow production of the 2013 Ford Fusion. A few other key plant moves includes upgrades to Ford’s Kansas City truck plant so that Ford can shift production of the Transit Commercial van from Europe to the US along with moving production of a mid-sized commercial van from Mexico to Ohio.

Most importantly, the shift of overflow production from Hermosillo Stamping & Assembly in Mexico to Flat Rock, Michigan means that the Ford Mustang gets to stay all snug in its own like stable just outside of the Motor City – right where production of the original all-American muscle car belongs.

Car guy wrote on October 5, 2011 - 4:29pm Permalink
What are some good places to find 2011 Ford Fusion floor mats? Do I need to go for any accessories store for the car or a Ford dealership for specific floor mats?
Auto Driver wrote on October 5, 2011 - 4:42pm Permalink
I was also looking for Ford Fusion accessories and I think the best first start is Ford's website. There are other places as well of course to find floor mats or other accessories, but I am refraining to paste a website there. The automaker's original source is the best first start.