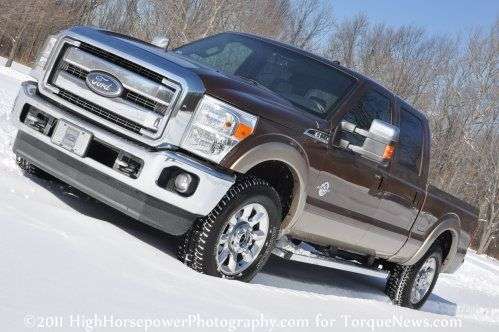 Ford Motor Company showed the lowest positive growth of any major automaker group doing business in the US market but with an improvement of 9% over September 2010, Ford beat out American Honda and Toyota Motor Co. in September sales growth thanks mostly to the popularity of their pickup trucks and SUVs.
Advertisement

While the Ford brand had a strong month, posting an increase of 14% with help from the F Series, the Explorer, the Escape and the Fusion, the Lincoln brand struggled – posting a decline in growth of 7% compared to the same month in 2010. Lincoln has had a strong summer but with no new vehicle offerings in some time now, the luxury arm of Ford Motor Company can really use the help of the new models promised by FoMoCo in the coming months.

Ford was the strongest brand of the company in terms of growth with its 14% improvement but more importantly, Ford was the bestselling single brand in the entire US auto industry with 168,181 units sold last month. Ford was lead in growth by the new Explorer, which moved 11,336 units for an improvement of 2o4% over September 2010. The Ford Ranger has seen production come to an end but it is still selling strong, with an 88% year over year improvement making the compact pickup the second best model in terms of growth and the Crown Victoria (also out of production) was third with a jump of 41%. As can be expected, the bestselling model from the Ford brand was the F Series pickup family which sent out an impressive 54,410 trucks to consumers last month – an improvement of 15% from September 2010 to September 2011. With 20,225 units sold, the Ford Escape was second in total sales and the Ford Fusion sedan was third in sales with 19,510 models sold.

The Lincoln brand had a tough month, with two of their six models showing negative growth in September 2011. The only two models to show positive growth were the Lincoln MKZ at 54% (cousin to the Ford Fusion) and the full sized Navigator SUV at 10% but the MKS, Town Car, MKX and MKT showed declines of 18%, 39%, 15% and 29%, respectively. The Lincoln brand was lead in sales by the MKX (cousin to the Ford Edge) with 2,267 units sold followed by the MKZ with 1,936 units sold and the MKS rounded out the top three with 1,073 sedans sold.

gonasip wrote on October 20, 2011 - 12:58pm Permalink
we don't jet when it will come to US market but the new Suv Citroen C4 Aircross looks really nice. wish to see it on the road.