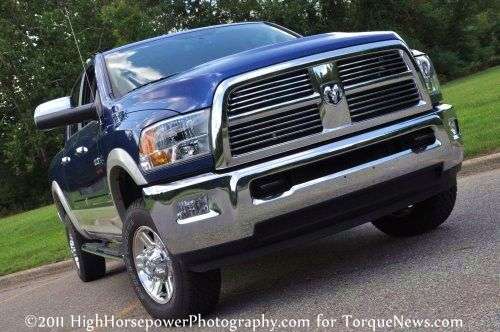 Sales numbers for September 2011 are in and once again, the Chrysler Group is the top dog among major automakers in terms of growth while their total sales volume allows them to claim the third spot on the sales chart, besting Toyota by almost 6,000 units.
Advertisement

The Chrysler Group saw a year over year improvement of 27% compared to last September, placing them atop the list in terms of growth. The closest competitor was Nissan at 25% and even the single-brand automakers like Hyundai fell short of the impressive month from the five Chrysler Group brands. All four of the traditional brands saw positive increases in September 2011, with 3 Chrysler brands in the top 7 companies in terms of growth rate.

First of all, the Fiat brand continued to show strong sales in its niche market, moving 2,773 new Fiat 500s to US consumers. This brings their total sales for the year to 13,861 as the company attacks the North American market with just a single model in the lineup. As more variants arrive in the US, like the sporty Abarth models or the upcoming electric Fiat 500, we can expect to see stronger numbers from the reborn Italian automaker.

The strongest brand in terms of growth from the Chrysler Group in September 2011 is the Ram Truck brand with an increase of 42% over last year. As is generally the case, the Ram pickup was the top model from the Ram Truck brand in terms of both sales volume and growth, with 24,522 pickups accounting for an improvement of 45% over the same month last year. Even though last month brought about the end of production of the Ram brand’s smaller truck as the Dakota saw its run come to an end, the “Dak” moved 708 units last month. September also marked the introduction of the new Ram C/V – a minivan workhorse based on the popular Dodge Grand Caravan – and its it first month of production Ram sold 134 units. The Ram brand can expect to see things continue to improve as the Ram C/V sees its numbers grow while the new packages to the Ram 1500 Tradesman and Express should help improve Ram pickup sales over the 2012 model year.

The Chrysler brand was next in line in terms of growth, with 23,559 units accounting for an improvement of 36% over September 2010. The redesigned Chrysler 300 has finally started to make its impact on the charts, with a 50% improvement coming thanks to 4,445 examples of the luxury sedan sold last month making the 300 the best model from Chrysler in terms of growth. The Chrysler Town & Country minivan was technically second in line with a gain of 16% but that is only when you consider the Chrysler Sebring and Chrysler 200 two different vehicles. If you consider them as the same vehicle, the 200 saw an increase of 87% - offering a clear indication of the improvements made in converting older and not-so-popular Sebring with the classy new Chrysler 200. The Town & Country was the top model in sales with 10,405 units sold last month, followed by the 200 and the 300.

The Jeep brand was next in growth, with a 24% increase coming with 35,565 SUVs sold last month. The refreshed 2011 Jeep Compass was the big winner for September 2011 as 4,422 compact utes accounted for a gain of 306% over the same month last year. The Jeep Wrangler was second in growth with a rate of 47% while the liberty was third with a gain of 10%. The top Jeep in terms of sales volume was the Wrangler with 11,388 units sold followed by the Grand Cherokee at 10,580 units and the Liberty rounded out the top three with 5,363 sport utility vehicles sent out last month.

The Dodge brand was the weakest in terms of growth but it is a good sign that the “weakest” in the brand saw an increase of 10%, especially when you consider the fact that Dodge was the company best brand in terms of sales volume. The leader in sales growth from Dodge was once again the new Durango, with the full sized SUV moving 4,923 units for an increase of 10,374% - that is ten thousand, three hundred and seventy-four percent growth. The lightly refreshed Dodge Journey was second in growth with a rate of 29% while the Caravan lineup rounded out the top three with a 27% gain over September 2010. The Caravan was the top model in terms of sales with 10,203 minivans sold last month followed by the Charger which moved 6,794 units and the Journey with 5,402 units.

For those keeping tabs at home, the Dodge Viper – more than a year out of production – still sent out 6 new supercars into the consumer world last month.

antonio311 wrote on October 4, 2011 - 7:50pm Permalink
Chrysler is back! Loving every minute of this! Wait until they start introducing all the new compacts & midsized vehicles!

Tesla Giga Berlin's New Hurdle: It's Not Only the Gov't, but Now Tesla Itself
Teslas Are Sold Out Until 2023, But The Timing May Reverse
END_OF_DOCUMENT_TOKEN_TO_BE_REPLACED