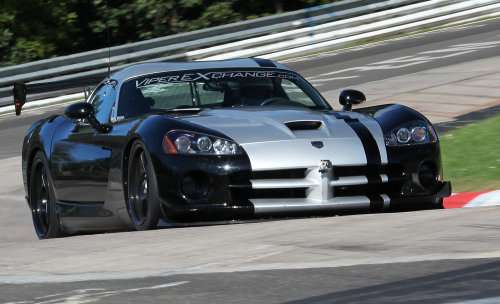 Two weeks ago the internet was abuzz with a rumor that the Dodge Viper had reclaimed its production car record at the famed Nürburgring course in Germany and today, the Chrysler Group has officially announced the results of their recent Viper runs at “the ‘Ring” – with a video showing their incredible 7:12.13 lap.
Advertisement

The 2008 Dodge Viper SRT10 ACR set the bar high for production cars when it ripped off an impressive 7:22.1 a few years ago and while that record stood for quite some time, it has been bested by the Porsche 911 GT2, the Corvette ZR1 and the special Nürburgring Edition of the Lexus LFA. The Viper has been out of production for over a year now but the 2010 Dodge Viper SRT10 ACR received some performance upgrades over the 2008 Viper that set the Ring record so they headed back to the famous German road course to see if they could reclaim their production car record.

When the Chrysler Group’s high performance SRT division began to work on reclaiming the Nurburgring record, the first task was to find a car with which to attempt the record and with the car over a year out of production; they had to rely on the help of some Viper diehards. They worked with the Viper Club of America in locating someone who had one of the 2010 Viper SRT10 ACR models that they could use for the record attempt and Tomball Dodge of Tomball Texas came through – providing not one but two of the ultra high performance SRT supercars.

The folks from the SRT brand took these two 2010 Dodge Viper SRT10 ACR coupes and headed to the Nürburgring on September 12th, with tenured GT racer Dominik Farnbacher behind the wheel. The group was plagued with rain over the first few days of their time there but once the rain stopped, the Vipers took to the track and even with dampness in a variety of the tricky corners; the 2010 Viper ACR was able to turn out a best lap time of 7:15.6. This time was around 6.5 seconds faster than the 2008 Dodge Viper SRT10 ACR but it was not quicker than the Lexus LFA Nürburgring Package’s time of 7:14.64. However, the SRT Group waited until the track dried and when the Vipers hit the 12.9 road course, the result was the quickest time ever turned in by a full scale production car by a major automaker with the time of 7:12.1 cutting a full ten seconds off of the time turned in by the 2008 Viper ACR.

The 2010 Dodge Viper SRT10 ACR was improved by adding a shorter fifth gear ratio for improved highspeed acceleration and higher straightaway speeds. Unfortunately, unlike the video by GM that shows the Corvette ZR1 setting its new best time, the video of the Viper doesn’t show the speed of the car as it is moving so we don’t know just how fast it got going in the long straight away. The company also added a new rear wing to improve high speed downforce which is displayed in the video before, with the 2010 Viper ACR hitting downforce levels of almost 1400 pounds at the end of the long straightaway.

“We’re extremely proud to set the lap record for a second time at the famed Nürburgring Nordschleife,” said Ralph Gilles, President and CEO – SRT Brand and Motorsports, Chrysler Group LLC. “Our team returned to Germany knowing we’d left some time on the track when we set our first lap record, so this effort shows the incredible depth and capability the Viper ACR has by running a full 10 seconds faster than we did in 2008.”

The next generation Dodge Viper is expected to hit in the spring or summer of 2012 at a 2013 model and unlike the current Viper, the next generation super snake will have the electronic drivers’ aids already found in the Chevrolet Corvette ZR1 and Lexus LFA like high performance/specially tuned stability and traction control systems. When that new model hits the streets, we can likely expect to see the Viper headed back to the Nürburgring to see just how much faster the new Viper will be compared to the previous models.