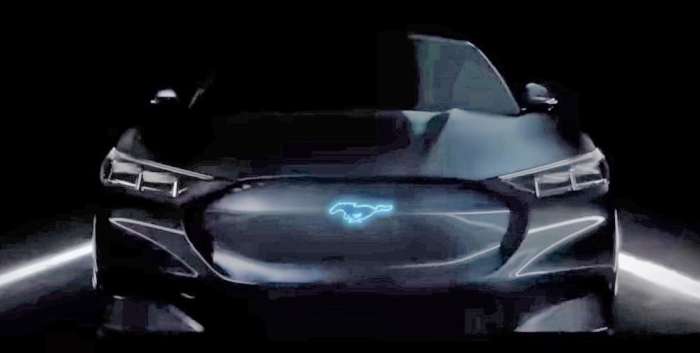 A new video from Ford Motor Company that talks about building the future reveals the shadowy car above that looks like a futuristic Mustang with a hybrid V8 and a glowing running pony logo on the grille – possibly previewing the next big thing to come once the GT500 has finally been introduced.
Advertisement

Heading into this past weekend, Ford Motor Company published the video below, featuring Bryan Cranston and talking about advancements in technology over the years. As the Breaking Bad star switches from role to role in the short video, he talks about how the technology has advanced over the years and who made those advancements happen.

The video is a cool piece for Ford fans, but around 37-seconds into the clip, we see the car above that could be our first look at the next generation Mustang. If nothing else, this is a car with a unique face, a glowing running pony logo on the grille and what appears to be a hybridized V8 under the hood.

Future of the Mustang
While Cranston talks about how technology advancements are made, we see all sorts of images, but around the 34-second mark, we get to the key point in the video. At first, we see what appears to be a 1969 Ford Mustang Mach 1, followed by a look at the 2019 Mustang on the open road.

Next, we get a Tron-style computerized look inside the engine bay of a Mustang, revealing what appears to be a V8 in the same color of blue that the Motor Company uses to promote their hybrid and electric vehicles.

After that engine graphic, we see the car above. We don’t know what it is, but it clearly has a Mustang grille badge in the same blue that we mentioned above. It also has a unique grille design that is unlike anything we have seen on any production Ford product, along with some high-tech looking headlights and an overall design that we haven’t seen before.

We have lightened up the image to bring out some of the features of this car, making it a little easier to see. The lines are a little bit Mustang and a little bit Fusion, leading us to wonder if this is a Mustang or something else entirely.

The Mach 1
Earlier this year, Ford announced that they were working on a Mustang-inspired EV that would compete with the likes of the Tesla Model X. The company seemingly teased the rear end last month and this time, we might be looking at the front of the Mustang-inspired EV. Of course, the hybridized V8 wouldn’t make sure for that, but perhaps the Tron-style engine graphic has nothing to do with the car shown above.

What really makes me wonder whether this is a futuristic Mustang or the Mach 1 EV (Ford has said that it won’t actually be called the Mach 1) is the use of the running pony logo. Even if the electric SUV is heavily inspired by the Mustang, it seems highly unlikely that the company would use the pony car’s famous badge for a completely different vehicle.

We don’t know for sure, but with auto show season quickly approaching, we should soon have a better look at what Ford Motor Company has planned for the future of the mighty Mustang and the Mustang-inspired electric SUV.
In the meantime, check out the video below.