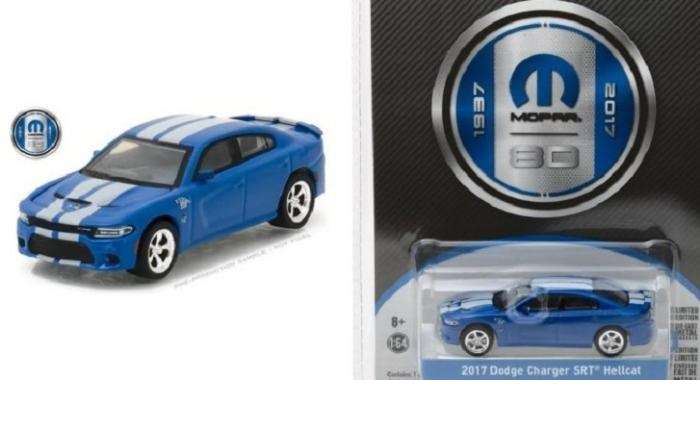 Those Dodge Charger SRT Hellcat fans and Mopar diecast collectors have a new item to watch for in stores, as the Greenlight Collectables new Anniversary Collection Series includes a Mopar-themed Hellcat Charger, a Jeep Wrangler and a handful of vehicles from other automakers.
Advertisement

The popularity of the Dodge Charger SRT Hellcat and Dodge Challenger SRT Hellcat has led to sales of more than 25,000 units over the past 3+ years, but the instant legend that is the Hellcat name has made miniature versions of the 707 Mopar muscle cars very popular with collectors.

The folks at Greenlight Collectables have previously issued a few Dodge Charger SRT Hellcats in 1/64th scale, but the newest tiny Hellcat has a special purpose – to commemorate Mopar’s 80th anniversary.

A Hellcat for Mopar’s 80th Birthday
The Mopar branch of the Chrysler Corporation was officially founded back in 1937, so for the 2017 model year, Mopar is officially 80 years old. To celebrate Mopar’s 80th birthday in large scale, the performance division created a special 80th anniversary edition version of their Dodge Challenger Mopar 17, but for those folks who only want to spend a few bucks on an 80th anniversary edition Dodge, Greenlight Collectables has the answer.

In cooperation with Mopar, Greenlight has rolled out their 2017 Dodge Charger SRT Hellcat in Mopar blue with white stripes and unique 80th anniversary badging on the fenders and the hood. As you can see in the image above, the Mopar 80th anniversary logo is emblazoned across the face of the package, with the uniquely decorated mini Hellcat below.

The Mopar 80th anniversary edition 2017 Dodge Charger SRT Hellcat hit retailers late last month (July 2017) around the USA along with the rest of Greenlight’s Series 6 of the Anniversary Collection. Along with the Charger, there is a Jeep Wrangler which also celebrates Mopar’s 80th birthday, a Shelby Mustang to celebrate 50 years of the Shelby Mustang, two pickups which celebrate 100 years of Ford trucks and a 60th anniversary Corvette.

The regular version (shown above) of this 2017 Dodge Charger SRT Hellcat should cost anywhere between $5.99 and $8.99, depending on the retailer, although you can find them on eBay right now for $10-12 shipped.

Panasonic Updates Profit Forecast, Noting How Much Tesla Batteries Help The Jump
2022 Porsche 911 GT3 Laps Nurburgring in 7:04 With Journalist Behind The Wheel
END_OF_DOCUMENT_TOKEN_TO_BE_REPLACED