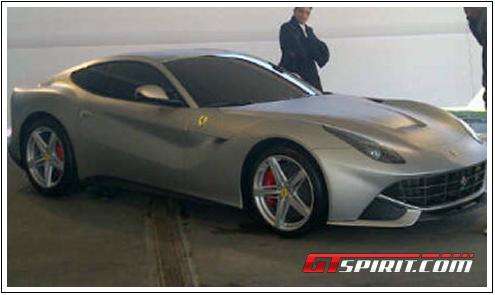 The performance car world is eagerly awaiting the Geneva debut of the “most powerful Ferrari ever” but thanks to the good people at GT Spirit.com, we have our first good look at the sleek new Ferrari F620 GT ahead of the new model’s Suisse show debut.
Advertisement

The car shown on the right was captured by a reader at GTSpirit.com and while this gives the world the first good look at the new Ferrari F620 GT, what is shown here isn’t actually a car at all. This is a full scale wooden depiction of the new F620 GT painted matte silver that was built to travel around and show off the look of the newest Prancing Horse without the company having to incur the costs of building a full car. The folks at GTSpirit confirmed with the Italian automaker that, while this isn’t a real car – this is what the Ferrari F620 GT will look like when it makes its debut next week at the Geneva Motor Show.

In addition to offering what seems to be the first official images of the Ferrari F620 GT, GTSpirit also offered up the specifications on the newest Italian supercar and as promised, the F620 is the most powerful production road-going vehicle ever to come out of Maranello. This begins with a revised 6.3L V12 engine that churns out 740 horsepower and 690lb-ft of torque, with the power being channeled to the rear wheels via a seven speed dual clutch gearbox.

Thanks to the fact that the new Ferrari is lower, shorter and most importantly – lighter – than the Ferrari 599 that it is replacing; the F620 GT should be quite a bit faster than outgoing model.

This monstrous drivetrain and new lightweight chassis should allow the 2013 Ferrari F620 GT to rip from 0-60 in just 3.1 seconds while reaching 100 from a stop should take just 8.3 seconds. These are numbers that would make the F620 GT quicker than the Lamborghini Aventador…and that’s something to brag about. Also, GT Spirit expects that the most powerful road-going V12 Ferrari of all time should also have a top speed north of 210 miles per hour so while setting the bar for Ferrari V12s, the F620 GT may also become one of the fastest production cars in the world.

Again, the 2013 Ferrari F620 GT in real (non-wooden) form is set to make its grand debut on February 29th, 2012 and while the supercar world is surely still eagerly looking forward to the newest addition to the Ferrari family – it looks as though the wonders of the internet have once again brought us a look at a car prior to the formal unveiling.

The Ferrari F620 GT looks awesome in wood and once the real thing meets the world, with the most powerful V12 engine ever offered in a Ferrari road car we can expect that this new model will very quickly race into the dreams of gearheads around the world.

Elon Makes a Cybertruck Statement With an Action, But Quiet in Words
Tesla's Record Month in China: Doubled Registrations in March 2021
END_OF_DOCUMENT_TOKEN_TO_BE_REPLACED