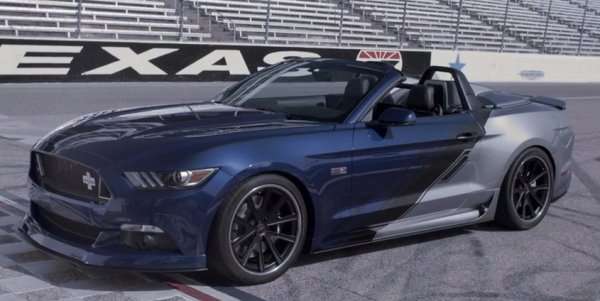 The newest Neiman Marcus Christmas book includes a limited edition Ford Mustang GT Convertible with 700 horsepower, 600lb-ft of torque, a handful of unique appearance upgrades and all-wheel drive – although the all-wheel drive technology is either a mistake in the listing, or a groundbreaking announcement for the muscle car world.
Advertisement

UPDATE: We spoke with the folks at Neiman Marcus and got the correct details on their 700 horsepower Mustang. Click here for our newest piece with the proper information on the custom muscle car.

Each year, high end retailer Neiman Marcus publishes their Christmas catalog, which is packed full of toys for the rich and included each year is a unique Neiman Marcus Edition vehicle. For the 2015 Neiman Marcus Christmas book, the special edition car is a custom 2015 Ford Mustang convertible that has 700 horsepower, 600lb-ft of torque, sport suspension, Brembo brakes and – most curiously – “All-wheel drive (AWD) technology”. It actually says that in the listing…that the Neiman Marcus Limited Edition Ford Mustang Convertible comes with all-wheel drive technology.

So, has Neiman Marcus worked out a deal to sell the first ever all-wheel drive Ford Mustang or is this a misprint? It is unclear right now, but my safe money says that this is a mistake that will be fixed in the online listing – although I have to wonder if the error has made it to the printed catalog.

However, even if the Neiman Marcus Mustang Convertible does not have all-wheel drive, it is still one incredible limited edition muscle car that is guaranteed to become an instant collectable. Plus, can you really go wrong with a 700hp Mustang convertible? I don’t think so.

First off, the NM Mustang is technically a “Speedster”, which indicates that when the top goes down, there is a carbon fiber tonneau that extends from the opening of the soft top all of the way forward to the styling bar directly behind the front seats. Basically, the Speedster design covers the rear seats. This custom Mustang also wears a unique rear taillight panel insert, a new rear spoiler and an aggressive chin spoiler – in addition to the unique 20” wheels and the striking two-tone paint job.

On the inside, the Neiman Marcus Ford Mustang Convertible is said to have lightweight racing seats with embroidered, although the headrests on the car in the video below look a great deal like those on the stock Mustang Convertible I just finished testing. Maybe the video car was just a prototype and the actual cars will have different seats. There will also be illuminated door sill guards, unique floormats, package-specific badging and carbon fiber trim.

Finally, the Neiman Marcus Ford Mustang Convertible has a long list of performance goodies, starting with the 5.0L V8 fitted with a supercharger and long tube headers, which increases the output to the aforementioned 700 horsepower and 600lb-ft of torque while 0-60 times drop to 3.5 seconds and the top speed climbs to 195mph. To help the NM Mustang handle the curves, this limited edition muscle car has a “performance racing” suspension setup and a Brembo braking package – both of which I would guess came from Ford Racing.

Rare and Expensive
While it isn’t entirely clear what you are getting if you buy 1 of the 100 2015 Neiman Marcus Limited-Edition Mustang Convertibles, we know that buying one will cost you $95,000. That is a big chunk of change for a customized Mustang GT Convertible, but when you consider the improved performance and the unique look, there is little doubt that all 100 units will sell out in a hurry. The cars officially go on sale on October 13th and the deliveries are promised by March 1st 2016. As a special bonus, everyone who buys a new Neiman Marcus Mustang Convertible will also get a two-day Ford Racing session, including track time in the 700hp Neiman Marcus Mustang.

Inconsistencies in the Listing
While the 2015 Neiman Marcus Limited-Edition Mustang Convertible might be the most technologically advanced muscle car ever, including an advanced all-wheel drive system, I suspect that this add could have several mistakes. First, the all-wheel drive system seems very unlikely for “only” $95k when you consider all of the other features of this beastly Mustang. Next, the listing says that the Neiman Marcus Mustang has a Lexan windshield and door windows, and I am pretty sure that Lexan windshields are not legal for road use in many American states so it seems unlikely that they would swap to a plastic windshield. The listing states that the cars have a custom colored supercharger, but the video below shows the engine bay with a black supercharger so unless their custom color is black – something isn’t accurate there, either. Finally, there is the seating issue mentioned above, as the car in the video appears to have normal Mustang seats with non-embroidered headrests.

Check out the video below and stay tuned to TorqueNews, where we will hopefully be able to find out for sure if the 2015 Neiman Marcus Limited-Edition Mustang Convertible is the first AWD Mustang ever. I am betting not, but the custom catalog Mustang is still one awesome muscle car.

Tesla Contemplates A New Strategy for China Retail even As Sales Boom
Jay Leno on Elon Musk & EVs: “I Think He Should Get ... Credit"
END_OF_DOCUMENT_TOKEN_TO_BE_REPLACED