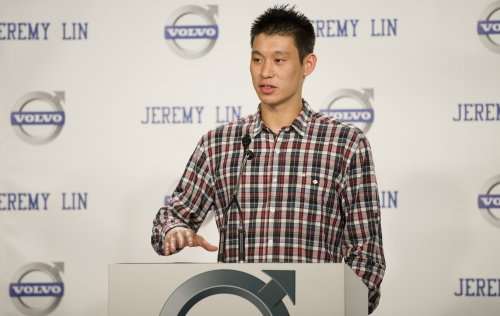 Less than a week ago it was rumored that New York Knicks star Jeremy Lin was being pursued by Volvo to help with a new marketing campaign in China and today it became official, as Volvo announced a new global endorsement partnership that will focus primarily on the US and China – the two regions where the American-born point guard of Chinese descent is best known.
Advertisement

Having a superstar sports celebrity is a great marketing tool and every automaker does it but with Jeremy Shu-How Lin, the Scandinavian automaker stands to benefit from “Linsanity” in both the US and China. While Volvo is technically a Swedish automaker, the company is owned by Chinese auto firm Geely, who is looking to bring about a renaissance of the brand around the world and in their booming Chinese home market. Lin’s new endorsement deal with Volvo will focus mainly on the United States and China but it will also reach other Asian countries where Chinese languages are spoken.

The Chinese auto industry shows the success of the Chinese economy as a whole and that means luxury cars have become a major seller. Over the past few years, luxury sales have been booming and parent company Geely wants Volvo to get a bigger piece of that pie. Bringing in a young, charismatic athlete like Lin (who has overcome a career of being overlooked), could help the automaker appeal to the younger crowd in every market where the new ad campaigns appear but the biggest impact should be in China. One key place where China differs from the culture in the United States is in their national pride and when someone of Chinese descent succeeds as Lin has in the NBA this season, the entire country seems to root for the young man’s success. As was the case with Houston Rockets 7 foot 6 inch giant Yao Ming, the Chinese has been close to follow Lin’s every step to stardom – creating a great deal of enthusiasm for the New York Knicks point guard. It is that very enthusiasm that Volvo hopes to generate in the Chinese auto industry while the simple fact that Lin is a recognized American sports figure should help both in the US and in other markets around the world.

"Volvo Car Corporation's choice of Jeremy Lin as the company ambassador derives from our shared ethos of passion, dynamism and progressiveness," said Freeman Shen, President of Volvo Cars China. "This is a significant moment in the history of Volvo Car Corporation's brand rejuvenation, showcasing the new Volvo brand strategy Designed Around You with sportsmanship and intelligence. In this new era, Volvo Car Corporation has set a vision of being the world's most progressive and human luxury car brand, and we are determined to win the future. For our region, Jeremy Lin is the pride of the whole Chinese population, and we are excited to work with him."

Unlike the majority of NBA superstars who couldn’t tell you where Harvard is, let alone be admitted, Jeremy Lin attended and graduated from Harvard after no major college basketball programs offered him a scholarship. Lin went on to set all sorts of records for Harvard’s basketball program but that didn’t save him from being overlooked in the NBA draft. Lin was signed as an undrafted free agent (becoming the only player in the NBA with a Harvard degree) and bounced around a bit before arriving in New York. He didn’t see much playing time early in his career with the Knicks but when he came off the bench in February and led the team to a come from behind win followed by a chain of incredible games – Lin became a global celebrity.

In addition to being an NBA star, Jeremy Lin has over 664,000 followers to his Twitter account, offering Volvo another interesting area in which to attract younger buyers.