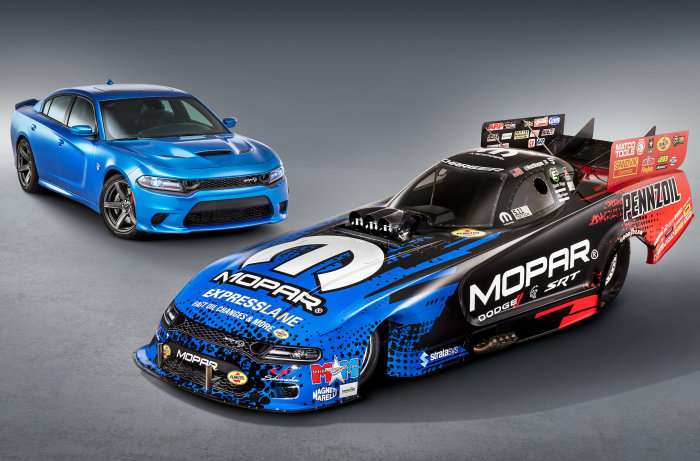 Today, Mopar introduced their new funny car body for the 2019 model year, which takes on the appearance of the 2019 Dodge Charger SRT Hellcat – effectively replacing the Charger R/T funny car that has dominated the class since hitting the track back in 2015.
Advertisement

Over the past three NHRA seasons leading up to 2018, Don Schumacher Racing has dominated the funny car class with the Dodge Charger R/T race car, but this season hasn’t gone quite as well as the past three. Perhaps with that in mind, Mopar and Don Schumacher Racing have teamed up to design the 2019 Dodge Charger Hellcat funny car body, with DSR driver Matt Hagan being the first to run this new body when the cars hit the track this weekend at the Dodge Mile-High NHRA Nationals Powered by Mopar.

“The Dodge//SRT brand is all about performance, and the introduction of the Mopar Dodge Charger SRT Hellcat NHRA Funny Car body showcases our commitment to performance and excellence at the dragstrip,” said Steve Beahm, Head of Passenger Car Brands – Dodge//SRT, Chrysler and FIAT, FCA – North America. “We are looking forward to celebrating our brand’s first year as title sponsor of the Dodge Mile-High NHRA Nationals Powered by Mopar by treating fans to the competition debut of the new Charger SRT Hellcat NHRA Funny Car.”

Dodge Charger Hellcat Funny Car
Some people will be quick to point out that the 2019 Dodge Charger Hellcat funny car really has little connection to the 2019 Dodge Charger SRT Hellcat street car, but the look of the 707-horsepower sedan is featured across the face of this new race car. Whereas the previous Charger R/T body had the front window dressing to provide the look of the 2015 R/T front end, this new car has the Hellcat-style front end stamped across the nose of the race car. This includes the new grille design with enlarged outlets on both sides – although the grille on the funny car doesn’t actually do anything – other than look cool.

While the aesthetic design of the 2019 Dodge Charger Hellcat funny car is the easiest change to see in pictures, this new race car isn’t just a new paint job. DSR and Mopar worked together to improve the carbon fiber and Kevlar body, making changes to the lower portion of the nose, tweaking the sculpting along the sides and changing the “burst panel” above the engine to more adequately relieve pressure under the body in the event of an engine failure.

In other words, the 2019 Dodge Charger Hellcat body looks a little different, but it is more aerodynamic and, in theory, safer for the drivers.

Mopar Involvement
A great many people who read about this new race car will point out that it shares nothing with the Charger road car and that Dodge doesn’t have any involvement in the production process. That is not true at all. Mopar and Dodge designers put in long hours to help develop the 2015 Charger R/T body – offering the best aerodynamic properties possible while also working to preserve some of the design characteristics of the road car.

With the wedge shape of the modern funny car, it is completely impossible to actually make any of these race cars look like a road car, but the FCA design team did a great job of creating a face and sides of the car that do look like the Charger sedan – and incorporating the Hellcat look just makes a whole lot more sense than the R/T.

The Rollout
Matt Hagan will pilot the new 2019 Dodge Charger Hellcat funny car this weekend at the Dodge Mile-High NHRA Nationals Powered by Mopar in Colorado, while his teammates – Ron Capps, Jack Beckman and Tommy Johnson Jr – will begin using the new body later this season. It is fitting that Hagan would be the first to use the new body, considering that he has spent his entire NHRA career in a Dodge Charger funny car.

“This new Funny Car body is something that Mopar and Dodge//SRT have put a lot of work and support behind, from R&D to wind tunnel testing,” said Hagan. “We improved on the body design. It was already a great design, a great body. But now, we’re going to have a little more downforce, a little more traction on these racetracks and it will be a huge performance advantage. We will be able to press harder with more downforce on the nose, which translates into huge amounts of downforce on the run.”

In other words, the new Charger Hellcat funny car should be faster, allowing the Don Schumacher Racing drivers to better compete with the Chevrolet Camaro funny cars from John Force Racing.

DeanMcManis wrote on July 19, 2018 - 12:20pm Permalink
It is funny that the only connection between this car and the Hellcat is that it uses a new car wrap to put a morphed picture of the Hellcat Charger on the nose of this specially designed racecar.