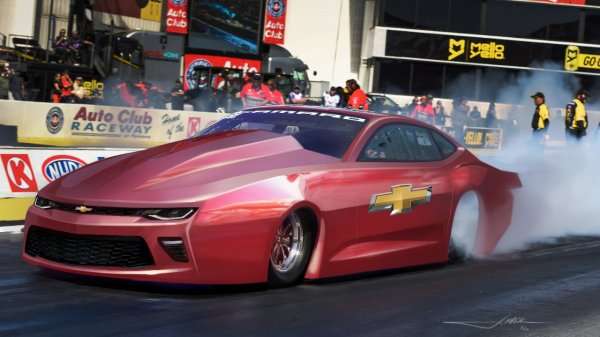 General Motors has announced that there will be a new Chevrolet Camaro Pro Stock car racing in the 2017 NHRA Mello Yello Drag Racing Series and among others, Jeg Coughlin Jr, Erica Enders and 2016 champion Jason Line will campaign these 6th generation-inspired Camaro race cars.
Advertisement

The Chevrolet Camaro dominated the Pro Stock class of the 2016 Mello Yello Drag Racing Series, winning 23 of the 24 races as Jason Line drove his Camaro to the class championship. The Camaro dominates Pro Stock, but with the 2016-2017 Camaro featuring an all-new look, General Motors and Chevrolet Performance have offered up a new Camaro body that is based on the look of the 6th generation muscle car.

The 6th gen Camaro Pro Stock Race Car
The new Chevrolet Camaro Pro Stock race car is based on the previous Camaro race car, but a new body has been added which more closely represents the look of the 2016-2017 Camaro. While this change may appear to be largely aesthetic, the engineers worked to make this body more aerodynamic, so in addition to looking like the new Camaro – this new Camaro Pro Stock car should also be better on the track.

“Our goal was to minimize aerodynamic drag within the NHRA guidelines and incorporate as many design cues from the production car,” said John Mack, Chevrolet Camaro exterior design manager. “The result is a sleeker and more aerodynamic Camaro SS.”

The full roster of teams running the new 6th gen Camaro Pro Stock car has not been announced, but we can expect that class champion Jason Line will be running a new body, as will the two newly-added drivers in the Chevrolet stable – Erica Enders and Jeg Coughlin Jr. Enders and Coughlin both ran for Dodge in 2016, but they have each spent significant portions of their careers in GM race cars…so this is kind of a homecoming for the Elite Racing drivers after Mopar pulled out of Pro Stock following the 2016 season.

Track testing of the new Chevrolet Camaro Pro Stock race car will begin later this month and the car will make its competition debut next February when the 2017 NHRA Mello Yello Drag Racing Series starts in Pomona, California. In the meantime, the new NHRA Pro Stock Camaro is making its public debut this weekend at the PRI show in Indianapolis.

In short, the new Camaro Pro Stock race car is based on the look of the 2016-2017 Camaro and it is promised to yield better aerodynamics than the current car – giving Chevrolet Racing a leg up on the 2017 season.

Another Chevrolet drag racing championship could be in their future and the new 6th gen Camaro Pro Stock car could be a big part of that.

Tesla Giga Berlin's New Hurdle: It's Not Only the Gov't, but Now Tesla Itself
Teslas Are Sold Out Until 2023, But The Timing May Reverse
END_OF_DOCUMENT_TOKEN_TO_BE_REPLACED