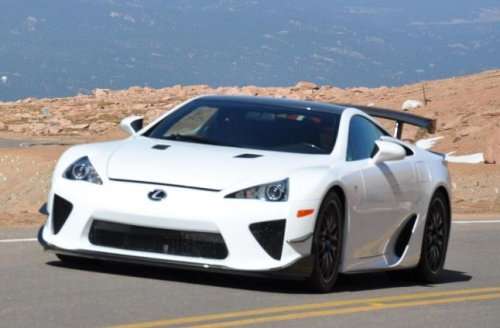 According to the official Lexus Facebook page, the incredible Lexus LFA Nürburgring Edition will make its formal American auto show debut in just 12 days at the 2012 SEMA Show in Las Vegas.
Advertisement

The Lexus LFA Nürburgring Edition is the highest performance road going version of the ultra high performance Japanese coupe with a variety of drivetrain and external modifications that allowed it to set the record time of 7:14.64 for production models at the famed Nürburgring Nordschleife course. (That production record has since been broken by the 2010 Dodge Viper SRT10 ACR with a time of 7:12.13...click here for more on that.) Just 50 examples of the LFA Nürburgring Edition will be built for the entire world and one of those 563 horsepower monsters will introduce itself the 2012 SEMA Show crowd beginning on October 30th.

The decision to debut the Lexus LFA Nürburgring Edition in Vegas seems like a surprising move as model debuts like this are traditionally reserved for the big public shows like Detroit, New York, Los Angeles or Chicago while the SEMA Show is not open to the public. This means that only media and approved members of the automotive industry will have a chance to check out the limited edition LFA starting on October 30th but with this bright white LFA in the US for SEMA – we can expect to see if make the normal auto show rounds starting with LA in November/December.

The Lexus LFA Nürburgring Edition is mechanically similar to the non-Nürburgring models but the V10 engine has been tuned to increase the power output from 552hp to 563hp along with a recalibration to the automatic transmission that allows quicker shifts for optimal performance. On the outside, the Lexus LFA Nürburgring Edition receives a front splitter with canards on the corners of the front fascia, a large fixed rear wing and lightweight alloy wheels wrapped in high performance Bridgestone Potenza RE070 street tires – the same tires used to run “The ‘Ring” in just 7 minutes and 14 seconds. Finally, a stiffer suspension system with a wider range of adjustability has been added to the LFA Nürburgring package to further improve the handling for every type of high speed driving be it hammering through a tight turn or accelerating through a longer, sloping curve.

The Lexus LFA Nürburgring Edition carries an MSRP of $445,000 - $70,000 more than the “normal” production LFA but in addition to the higher performance Lexus supercar, buyers of these special 50 units will also receive training sessions at the Nürburgring with instructors from the track, a one night stay at the Lindner Congress and Motorsport Hotel Nürburgring, admission to the on-sight amusement park, a Nürburgring jacket and a one year pass to the track. This is clearly a package that caters more towards European buyers who have the luxury to drive to Nürburg Germany but I expect that Americans who can shell out $445k for the LFA Nürburgring Edition can afford the flight to Europe to enjoy their time on the Ring.

Tesla Contemplates A New Strategy for China Retail even As Sales Boom
Jay Leno on Elon Musk & EVs: “I Think He Should Get ... Credit"
END_OF_DOCUMENT_TOKEN_TO_BE_REPLACED