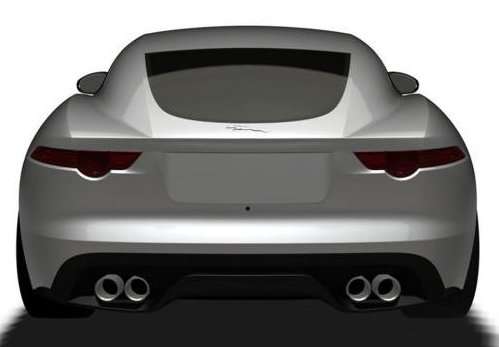 The Jaguar F-Type is one smooth looking convertible but considering that top-down cruising isn’t for everyone, there have long been rumors that there is a hardtop version on the way – and thanks to the patent drawings shown below, we have our first look at the new Jaguar F-Type Coupe.
Advertisement

Before we get into talking about the great looking Jaguar F-Type Coupe shown in this article, we should point out the fact that these are said to be images revealed via a foreign patent office by the German auto sites Auto Motor Und Sport. I believe that these are indeed patent drawings but the murmurs around the internet question their legitimacy because these do appear to be a bit more detailed than your average patent drawings. These could be very well done fake images created by a skilled photoshop artist but shy of the added color tones – I have no reason to doubt that these are patent drawings of the new Jaguar F-Type Coupe.

The Jaguar F-Type is a gorgeous piece of motoring machinery but not everyone wants a convertible when they are shopping for a new sports car. Convertibles have a variety of downsides such as increased noise in the vehicle when the top is up (compared to a fixed roof vehicle) and problems protecting the occupants from extreme temperatures. Convertibles often weigh more than their hardtopped counterparts as well due to the structural reinforcements needed to make them “as safe” as cars with a fixed roof. Finally, some people just don’t want a convertible and so far, if you want a new Jaguar F-Type you are stuck with the convertible (which is a good problem to have). However, rumors have been soaring around the internet that there is a F-Type Coupe on the way and these leaked patent images all but verify the existence of a hardtop version of the small, sporty Jag. Across the front end and along the sides of the Jaguar F-Type Coupe, nothing has changed shy of the addition of the fixed roofline. The production F-Type convertible has a very flat form behind the windshield but the F-Type Coupe has a fastback shape that has the roofline basically reaching all of the way to the back of the car. While GM lovers will frown upon this comparison, I find the new rear portion of the roofline to be very much like the new 2014 Corvette Stingray and as is the case with the C7 Stingray – this long fastback design looks great on the F-Type. The shape of the upper quarter panel area has been maintained similar to what is featured on the F-Type convertible while the high read haunches and slippery back glass really give this coupe an aggressive natural design – one that could be compared to a big cat hunkered down, waiting to pounce on some unsuspecting prey. The upper portion of the Jaguar F-Type Coupe is pretty much identical to the convertible with the prominent sharpened edge clearly splitting the top of the trunklid from the face with the same taillights and basic rear end shape as the droptop models. Where the F-Type Coupe does appear to differ greatly is in the lower diffuser, where the dual center trips from the production model have been replaced with quad tips – two poking out through under each side of the rear fascia. Also, where the production exhaust hangs under the rear diffuser in an indented area, the F-Type Coupe quad exhaust comes through openings on each side. This provides a much more race-ready look while also possibly allowing Jaguar engineers a chance to better tune the air flow coming out from under the rear of the car. In addition to the leaked patent drawings of the new Jaguar F-Type Coupe, Auto Motor Und Sport believes that the F-Type coupe and convertible could soon feature the new turbocharged 2.0L 4-cylinder engine found in the current XF sedan. While this 240 horsepower mill would mark a big drop in performance from the base supercharged V6 with 340 horsepower – this turbo 4 would afford the F-Type far better fuel economy and possibly a new, lower price. While most sports car buyers don’t care about fuel economy, the governments of the world do and offering a fuel friendly model – even if no one buys it – helps the company’s overall fleet fuel economy ratings. Also, that smaller engine would likely have a price tag below the current $69,000 base price of the convertible and a less expensive entry level package would help attract new buyers to the brand.

Over the past year or so, whenever patent images have leaked automakers have been quick to roll out official images of the vehicle in question so there is a chance that the company could offer up some official info on the new Jaguar F-Type Coupe but at the same time – we might have to wait until an official auto show rollout to meet the new hardtop British sports car.

A special thanks to Max for the translation help!