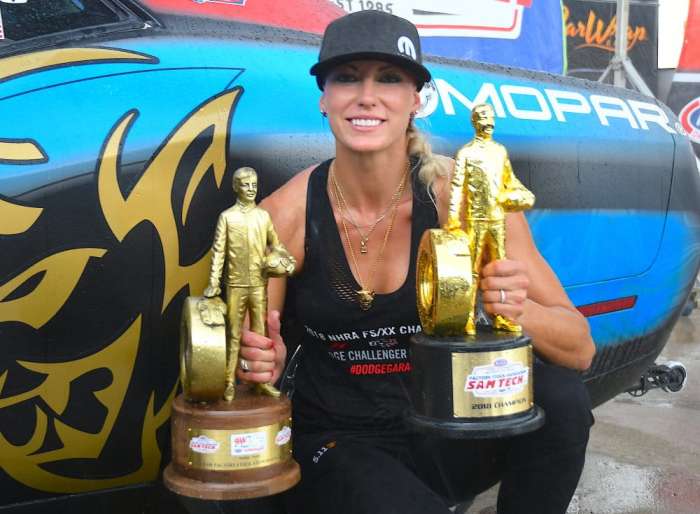 This past weekend, Leah Pritchett drove her Dodge Challenger Drag Pak to a 3rd straight win in the class, also securing the Factory Stock Showdown championship title and leaving no question as to which brand is the leader in the world of modern stock-based drag racing.
Advertisement

The 2018 NHRA Factory Stock Showdown schedule was comprised of seven events, starting in March at the Gatornationals and finishing up this past weekend in Dallas at the Fall Nationals. After watching two different Camaros win the first two events of the season, Mopar-based Dodge Challenger Drag Pak drivers won the next (and final) five races of the season. Joseph Welch won the class in the 3rd and 4th races on the Factory Stock Schedule while Leah Pritchett reeled off back-to-back wins in the 5th and 6th races of the season.

As a result of her strong late-season run, Pritchett came into the class finale in Dallas with a real shot at taking home the title in her first full season in the class. To do so, she would have to beat Stephen Bell and Arthur Kohn in the Fall Nationals, so while a great Chevy-Dodge battle has been going on all season in the Funny Car class, there was a similar battle in the Factory Stock Showdown class that would decide the champion.

The Final Race
Leah Pritchett qualified 10th in the Factory Stock class at the Fall Nationals, beating Aaron Stanfield in hi Chevrolet Camaro in the first round and Randy Taylor in his Camaro in the second round. In the semifinals, Pritchett made the first of two runs that would decide the outcome of the class championship. Taking on Arthur Kohn, who she trailed by a single point, Pritchett laid down a fantastic .038 reaction time and the car ran an 8.107 at 169mph to get the win and advance to the finals.

Also in the semifinals, Stephen Bell and his Camaro took on Kevin Skinner and his Ford Mustang Cobra Jet. Bell was also a single point ahead of Pritchett coming into the semis, so with her winning and advancing to the finals, Bell would have to do the same. However, Skinner and his Mustang beat Bell’s Camaro, securing the 2018 Factory Stock Showdown championship for Leah Pritchett and Don Schumacher Racing.

Best of all, in the final round, Pritchett took down Skinner’s Mustang to win her 3rd-straight race in the class, making the championship win that much sweeter.