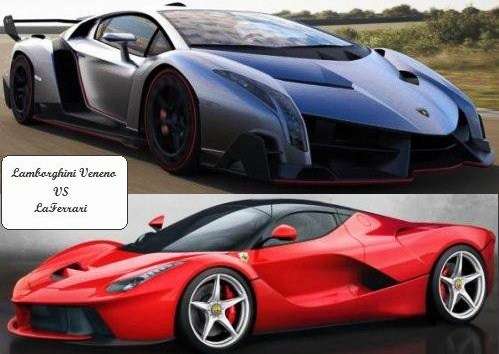 Lamborghini Veneno vs LaFerrari - which is the greatest supercar?

The new Lamborghini Veneno and LaFerrari both debuted at the 2013 Geneva Motor Show as the most powerful of their respective breeds but which of these two incredible Italian halo cars is the greatest? We take a look at the numbers side by side to see which new supercar has what it takes to claim the title.
Advertisement

First of all, we know that both the Lamborghini Veneno and LaFerrari are very special supercars with both being touted as the most powerful to ever be offered by the two companies. We aren’t talking about the most power Nissan ever or the most powerful Opal – being the most powerful Ferrari and Lamborghini is a title that is truly remarkable given the long history of the two companies. However, with both of these new supercars making their world debut in Switzerland at the 2013 Geneva Motor Show, many gearheads are questioning which is the better of the two Italian supercars. Before I give my opinion on which I think is the greatest Italian halo car to date, let’s take a look at the numbers on these two cars.

The Lamborghini Veneno was designed to celebrate the 50th anniversary of the fabled Italian automaker and to show how far the company has come in the past 50 years, Lamborghini wanted to put every bit of possible technology into the Veneno. Everything that Lamborghini knows about designing and building a supercar went into the new Veneno and the result is a car that will beat any stock road going Lamborghini ever built – and probably a great many of their race cars.

The Lamborghini Veneno is powered by the same naturally aspirated V12 engine as the Lamborghini Aventador, but some tweaks to the engine allow this V12 to send 740 horsepower to all four wheels via an advanced full time all wheel drive system and a 7-speed automated manual transmission. At 3,190 pounds, the Veneno is 275 pounds lighter than the Aventador that packs the same drivetrain and that allows the new Lambo supercar to dash from 0-62 miles per hour in just 2.8 seconds while reaching a top speed of 221 miles per hour. Only three examples of the Lamborghini Veneno will be made with a price around $3.9 million US dollars – and all three of them are already sold.

Click here for a full look at the Lamborghini Veneno including pictures.

LaFerrari
During the developmental stages of the Ferrari Enzo successor it was known by a variety of names including the F70 and the F150 Project but when the most powerful Ferrari debuted at the Geneva Motor Show – it came with a name intended to signify that this is truly the most incredible Ferrari ever built. As I said when LaFerrari debuted…this isn’t just another Ferrari – this is THE Ferrari.

LaFerrari follows in the footsteps of some truly remarkable sports cars including the GTO, the F40, the F50 and the mighty Enzo but in developing LaFerrari, the engineers wanted to build more than just a high performance supercar…so they made it an ultra high performance hybrid. The result is a supercar that is fitting of the LaFerrari name with technical specifications and details that make it one of the most remarkable vehicles in the history of the automotive industry. Not only is LaFerrari the most powerful road going Ferrari ever built but thanks to the race proven HY-KERS hybrid assist system, LaFerrari is also one of the most efficient.

LaFerrari is powered by a high revving V12 that churns out an impressive 789 horsepower and 516lb-ft of torque but with the HY-KERS hybrid assist setup, the overall output of LaFerrari sits at 950 horsepower and “greater than” 664lb-ft of torque. This power is channeled to the rear wheels via a 7-speed dual clutch automatic that helps the 2,400 pound LaFerrari rip from a stop to 62 miles per hour in “under 3 seconds” with a top speed that is promised to top 217 miles per hour. Ferrari has yet to offer exact performance figures (0-62, top speed, etc) but I would be willing to bet that they will be equal or very, very close to those posted by the Lamborghini Veneno. 499 examples of LaFerrari will be built with a selling price of $1.5 million US dollars and Sergio Marchionne has stated that they are all spoken for.

Click here for a complete look at LaFerrari including images.

When you look at many of the statistics side by side, LaFerrari seems to have a substantial advantage with a considerably lower curb weight and around 210 more horsepower while likely also having a significant advantage in torque. However, the fact that the Lamborghini Veneno utilizes the full carbon fiber body and chassis with a state of the art all wheel drive system, allowing this heavier and less powerful vehicle to post preliminary performance figures that are better than those offer by LaFerrari indicate that the Lamborghini makes better use of the available power.

LaFerrari has gobs more power and is more efficient thanks to the HY-KERS hybrid assist system but the Lamborghini Veneno will seemingly be the quicker and faster of the two. As much as I would like to side with the stunning sharp lines and the performance advantage of the Lambo – I have to pick LaFerrari as the better of the two new Italian supercars. Add to the 950 horsepower drivetrain and the hybrid efficiency of LaFerrari a price tag that is less than a third of the Veneno while also being easier (in theory) to get with 496 more copies sold to the public – LaFerrari is deserving of the title of being the world’s greatest supercar…For now.

Between the Lamborghini Veneno and LaFerrari, which supercar do you think is deserving of being named the greatest supercar in the world? Tell us in the comments below!

jp wrote on April 6, 2013 - 11:46pm Permalink
the laferrari is 5sec faster than the enzo. engineers at ferrari have not said anything on top speed yet so its not 217mph. if its supposed to compete with the bugatti it can go faster. ferrari only said its faster than 225mph. and the veneno only goes 217mph not 221mph. the ceo of lambo said it from his own lips. Ferrari Wins
aiden wrote on August 30, 2017 - 8:23pm Permalink
the laferrari smokes the veneno first laferrari is 0-60 in 2.4 sec and veneno is crap 0-60 in 2.8 seconds :( the laferrari will 100 % beat a veneno around track no problem even if the driver is bad in a laferrari
iz wrote on December 5, 2013 - 8:29am Permalink
How about the fuel consumption if both were to maintain top speed. How long will they last? Which one consumes more gas? Ferrari is more functionaland sleek. Lambo is more creative and futuristic. On a straight road, and on paper, ferrari wins. But it all boils down to how each car is driven and who drives it.