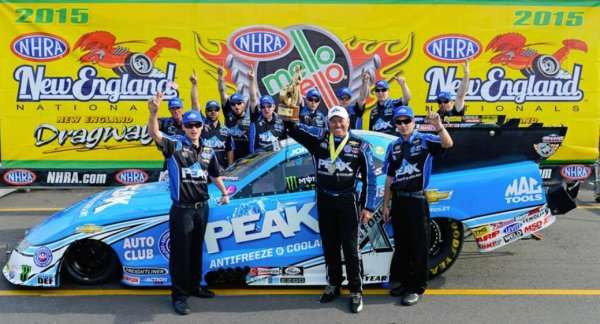 It has been a frustrating first season for John Force Racing and their new Chevrolet Camaro funny cars, but this past weekend, the living legend scored his second win of the season and his second win in the new Camaro race car – beating one of the dominating Don Schumacher Dodge Charger teams.
Advertisement

2015 is the first year for John Force Racing’s new Chevrolet Camaro funny cars, with John Force, Courtney Force and Robert Hight all switching from a Mustang to the Camaro after Ford pulled their factory support in 2014. Prior to running the Mustang, John Force ran a few different GM funny cars, but this was his first Camaro in many years and it marked the return of Chevrolet to the top ranks of the NHRA funny car world.

The Chevrolet Camaro returned to the NHRA funny car ranks with what is arguably the best team possible, with John Force Racing having a hundreds of wins and fistfuls of championships under their belts. Unfortunately, the team has struggled a bit this year, often turning in very fast times (often sitting at or towards the top of the qualifying ladder), but that hasn’t led to a bunch of wins. John Force had won one race during the first 9, but with so many strong qualifying times, the team was looking to pull down more wins.

Qualifying in New England
This past weekend, the teams of the NHRA Mello Yello headed to the New England Nationals in Epping, New Hampshire and while the Dodge Charger teams were looking to continue their dominance of the funny car class, John Force Racing was looking to put the Chevrolet Camaro back in the winner’s circle.

Once again, qualifying went well for the John Force Racing Camaro funny cars, with John Force qualifying 3rd, Courtney Force qualifying 4th and Robert Hight qualifying 5th. The Dodge Charger of Tommy Johnson Jr qualified first, just 8 thousandths of a second quicker than Force and the Toyota Camry of Cruz Pedregon qualified 2nd, just 3 thousandths ahead of Force. With all three of the Force Camaro team cars in the top five, the Chevy racing program was looking strong, but they had looked strong many times this season only to fall short in eliminations, but this time, things were different.

In round 2, Courtney Force and Robert Hight had to go head to head and after Hight pulled the starting line advantage, Force drove around him on the top end to take the win. John Force had an even tougher challenge, taking on series leader Matt Hagan, who’s 2015 Charger has won 3 events this season. While Hagan only qualified 6th, he had the quickest time in round 1, so Force had his work cut out for him in round 2. Force pulled the big starting line advantage and even though Hagan went a little quicker – the Force Camaro still got the win.

In round 3, Courtney Force took on fast qualifier Tommy Johnson Jr and the race went very poorly for the Chevy. After Johnson got a solid starting line advantage, Force smoked the tires and gave the easy win to the Dodge. On the other side of the final four funny car bracket, John Force took a huge starting line advantage and turned it into a sound beating of Cruz Pedregon’s Toyota.

The Finals
After Tommy Johnson Jr was the top qualifier, he turned one of the quicker times in every round leading up to the finals, but John Force and his Camaro laid down their own solid times. When the race began, Johnson grabbed a starting line advantage, but Force reeled him in down the stretch and took the win. Johnson ran his worst run of the event in the finals and had engine problems in doing so, giving Force his second win of the season.

Championship Standings
With the win in New England, John Force has jumped up to 3rd place in the 2015 championship race, sitting 94 points behind class leader Matt Hagan and 33 points behind 2nd place Ron Capps. There are eight events remaining before the Countdown to the Championship and right now, both John Force and Robert Hight are in the top ten while Courtney sits in 11th, one spot out of the final championship run.

Tesla Contemplates A New Strategy for China Retail even As Sales Boom
Jay Leno on Elon Musk & EVs: “I Think He Should Get ... Credit"
END_OF_DOCUMENT_TOKEN_TO_BE_REPLACED