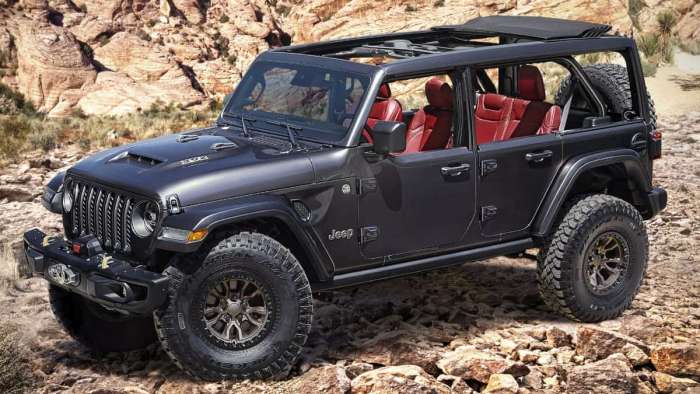 A Jeep Wrangler or Gladiator with the 392-cubic inch Hemi would be an awesome off-roader, but while so many people were convinced that this was a hint at an upcoming production model, it is a concept that was likely slated to debut a few months back at the Easter Jeep Safari.
Advertisement

On July 11th, the Jeep social media accounts shared the picture above, showing what appears to be the front portion of a current Wrangler or Gladiator. It was posted to Facebook without any text, leaving viewers to decipher the key aspects of the image. For the most part, it looks like an average Wrangler or Gladiator, but it has an unusual hood with some even more unusual badging.

At first, I thought that it could be a new 3.0-liter badge, as the EcoDiesel version of the Gladiator had been officially announced on July 10th, but as Jeep fans began playing with the image in photo editing programs, it looks like the hood says “392”. Should that be the case, this mysterious off-road machine is likely powered by the same 6.4-liter, 392-cubic inch Hemi that motivates an array of SRT vehicles including the Jeep Grand Cherokee, the Dodge Durango, the Dodge Charger and the Dodge Challenger. 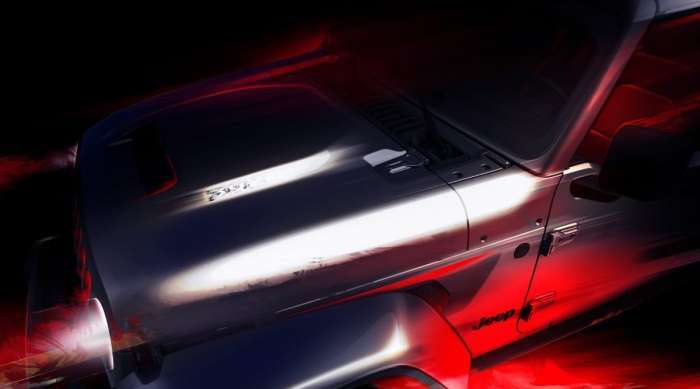 Needless to say, the possibility of either a Wrangler or Gladiator with a 392-cubic inch Hemi is of great interest to everyone who has been dreaming of having one of these mid-sized off-roaders with big V8 power. Unfortunately, FCA issued a press release this morning introducing the Jeep Wrangler Rubicon 392 Concept. For those who had hoped that the weekend teaser offered a first look at a powerful new production model, the news of this concept is disappointing, but optimists are keeping their hopes up that cool concept will lead to a segment-crushing production model.

Wrangler Rubicon 392 Concept
The Jeep Wrangler Rubicon 392 Concept is based on the production Wrangler Unlimited Rubicon, but the standard engine has been replaced by the 392-cubic inch Hemi from the Jeep Grand Cherokee SRT. In the Wrangler concept, this powerful mill sends 450 horsepower and 450 lb-ft of torque towards all four wheels by means of a “stronger 8-speed transmission” and Dana 44 axles. Both the engine mounts and the frame have been modified to handle the power, but no details on those frame modifications have been included in the announcement.

Other features of the Jeep Wrangler Rubicon 392 Concept including Fox monotube shocks, a Jeep Performance Parts 2-inch lift kit and Tru-Lok locking front and rear differentials, helping this SUV to go anywhere in a hurry. This vehicle can comfortable cross water that is 34-inches deep while offering 13.25 inches of ground clearance, an approach angle of 51.6 degrees, a departure angle of 40.1 degrees and a breakover angle of 29.5 degrees. 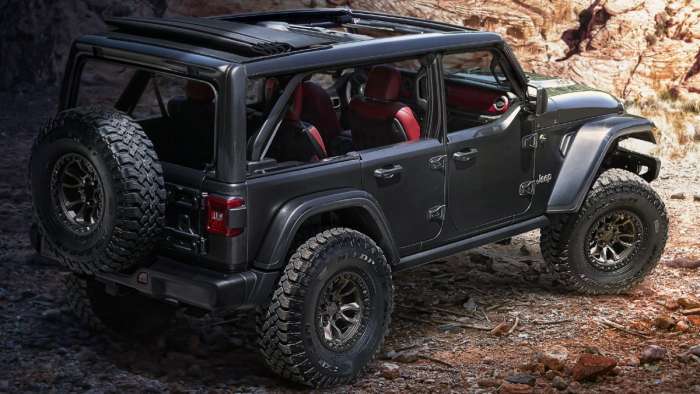 “Jeep Wrangler enthusiasts have been asking us for a Wrangler V-8 and our new Wrangler Rubicon 392 Concept proves that we have the ability to make that happen,” said Jim Morrison, Head of Jeep Brand – FCA North America. “From the recently introduced 29-mpg Wrangler EcoDiesel to our award-winning Jeep Gladiator, and the upcoming Wrangler 4xe plug-in hybrid electric vehicle, Jeep is clearly listening to its customers. We are anxious to gauge their reaction to this new Wrangler Rubicon 392 Concept, a vehicle that delivers an incredible and unmatched level of fun-to-drive performance and capability, on- and off-road.”

Production Possibilities?
When the teaser image was issued this weekend, many people were sure that it indicated that Jeep is bringing a Wrangler with a 392 Hemi to market. The comment by Jim Morrison above about “having the ability to make that happen” supports those hopes, but right now, I believe that this is merely a concept.

You might be asking yourself why Jeep would bother to create such an elaborate concept without any set production plans. Well, keep in mind that FCA announced in mid-March that the company would not be participating in the annual Easter Jeep Safari in Utah due to the ongoing Covid-19 pandemic. Each year, the Jeep brand brings a handful of “Moparized” models to Moab for the Easter event and by mid-March, the odds are good that at least a few of those customized Jeeps had been built for the event.

When the company canceled their plans to attend the event, many people wondered what would happen with the vehicles that were built for Easter Jeep Safari. I believe that this is one of them and rather than introducing the Wrangler Rubicon 392 Concept in Utah, the company teased it on social media and introduced it online.

Now, if I am correct and this was one of the vehicles built for the Easter Jeep Safari, it is likely nothing more than a concept. Jeep and Mopar have teamed up to create many incredible vehicles that never came to production and this could be one of those.

However, there seems to be demand for a V8-powered Wrangler and with FCA being oh-so-willing to introduce vehicles with crazy amounts of Hemi power, I am keeping my fingers crossed that the Jeep brand will eventually offer some variation of this package in production form. It would easily be the most powerful vehicle in the segment while also likely being one of the most capable off-road packages on the market.
Patrick Rall is a professional writer and photographer with a passion for all things automotive. Patrick has been sharing his automotive expertise in automotive journalism from Detroit for more than a decade covering the Big Three. Having grown up in his father’s performance shop, he spent extensive time at the oval track and drag strip – both driving and wrenching on various types of vehicles. In addition to working as a writer, Patrick previously worked as an automotive technician before moving on to a business office position with a chain of dealerships, and this broad spectrum of experience in the industry allows him to offer a unique look on the automotive world. Follow Patrick on Youtube and Twitter. Find more of Patrick's stories at Torque News Dodge.