The Jeep Wrangler Rubicon 392 is no longer a concept, with a 470-horsepower production model slated to go on sale early next year - serving as the first V8-powered Wrangler in roughly 40 years with an unprecedented combination of on- and off-road performance.
Advertisement

It has been roughly 40 years since Jeep offered a Wrangler with a factory-issued V8, but that is going to change early in 2021. The Trail Rated brand announced today that the Wrangler Rubicon 392 that pretty much everyone loved as a concept earlier this year will become a production model. The Hemi-powered Wrangler that will go on sale early next year sports the same aggressive look as the concept, but the production model actually has more power than the concept – packing 470 horsepower and 470 lb-ft of torque. That makes the 2021 Rubicon 392 the most powerful Wrangler ever.

“This is the most powerful, quickest, most capable Jeep Wrangler we’ve ever built,” said Jim Morrison, Head of Jeep Brand – FCA North America. “The factory lift and abundant low-end torque from the V-8 makes the Rubicon 392 the king of the hills, whether you’re rock crawling at low speeds or powering up an incline. And, when pavement replaces dirt, Rubicon 392 makes quick work of the road.” 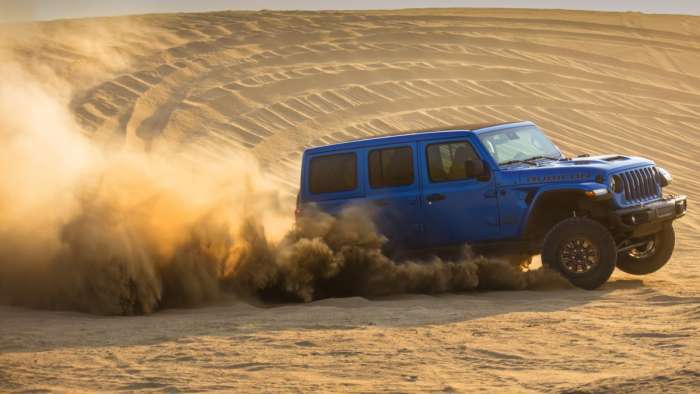 While the key feature of the 2021 Jeep Wrangler Rubicon 392 is the 6.4-liter Hemi under the budging hood, this SUV is more than just a big engine in a current model. There are a long list of unique features, all of which are detailed below.

Hemi in a Wrangler
The 2021 Jeep Wrangler Rubicon 392 is powered by the 392-cubic inch, 6.4-liter V8 that was previously only offered in SRT-level versions of the Grand Cherokee, as well as the Dodge Charger, Challenger and Durango. In the concept that was introduced this past summer, this engine delivered 450 horsepower and 450 lb-ft of torque, but owners of the production model will enjoy 470 horsepower and 470 lb-ft of torque. 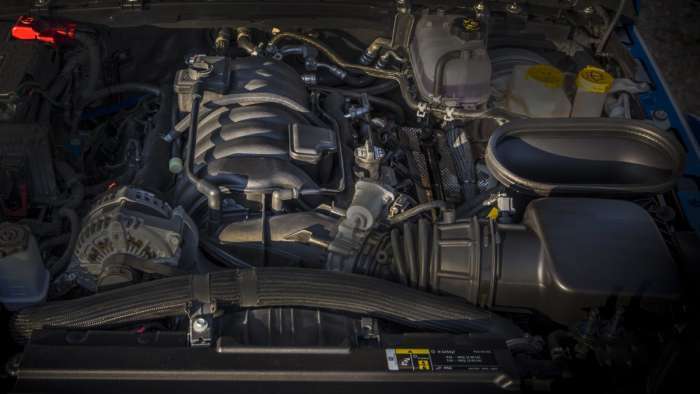 In addition to being the first non-SRT vehicle to use this 392 Hemi, the Wrangler is the first vehicle that is engineered to be more than an on-road performer. That led the engineers to develop the Hydro-Guide engine air intake system, which uses three levels of filtration to remove dirt and water from the air headed into the engine. This system will pull up to 15 gallons of water per minute from the intake path, so driving in even the hardest rains is no problem. In fact, in removing 15 gallons of water per minute, river water washing across the hood while crossing deep water is not a problem for the Hemi-powered Wrangler. 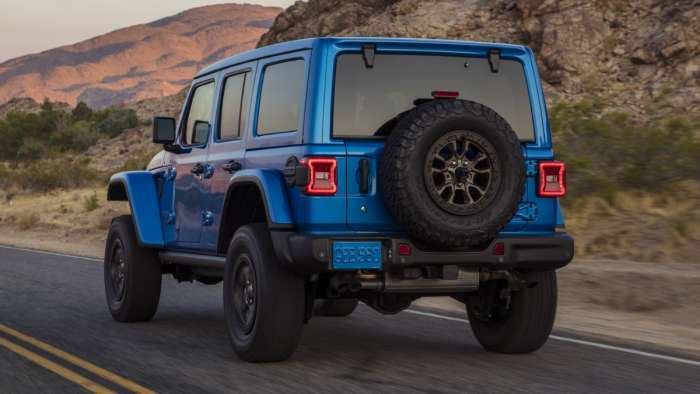 The 2021 Wrangler Rubicon 392 also features a similar active dual mode exhaust system to the pipes on the Dodge and Jeep SRT models. This exhaust system has a pair of valves that open under hard throttle to increase air flow and exhaust volume. When idling around town, the exhaust isn’t all that loud, but when the dual mode exhaust is activated, it roars like an American muscle car. Also, unlike the Dodge and Jeep SRT models, which control the active exhaust system within the drive modes, the Rubicon 392 is the first vehicle to have a button on the dash to turn the dual mode system on and off. 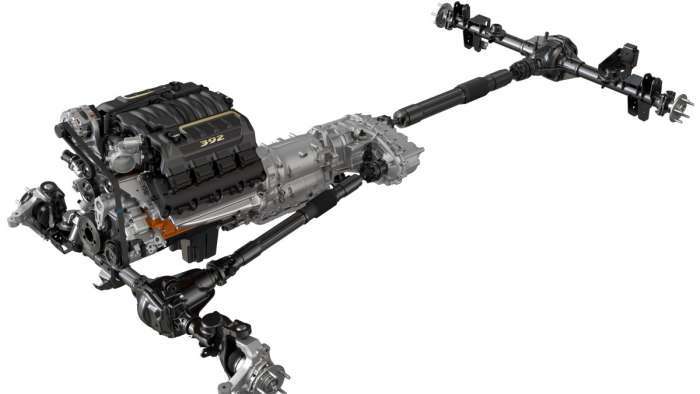 The power from the 392 Hemi is sent through a ZF 8HP75 8-speed automatic transmission, full-time four wheel drive with a Selec-Trac two-speed transfer case and a pair of Dana 44 axles with 3.73 gears. A set of 17-inch beadlock capable wheels wrapped in 33-inch BFGoodrich KO2 All-Terrain tires puts the power to the ground, offering a mix of on- and off-road traction.

Even though the BFG tires are as far as possible from ideal for quarter mile drag racing and on-road acceleration, the 2021 Wrangler Rubicon 392 scoots from a stop to 60 in just 4.5 seconds while covering the quarter mile in 13 seconds flat. The top speed is limited to 99 miles per hour, due to the fact that the tires have a speed rating of 99, but the acceleration numbers are very impressive.

Upgraded Chassis Bits
In addition to the powerful V8 and beefed-up drivetrain, the Wrangler Rubicon 392 has an array of upgrades to make it the most capable of the famous Jeep offroaders. The engineers started by adding stronger frame rails, stronger front upper control arms and cast iron steering knuckles. Next, larger brakes were installed, as were thicker axle tubes on the Dana 44s, which also feature Tru-Lok electronic locking differentials Unique to the Rubicon 392, the Off-Road Plus drive mode allows the rear locking axle to remain engaged at high speeds, leading to better traction when storming across the sand dunes. 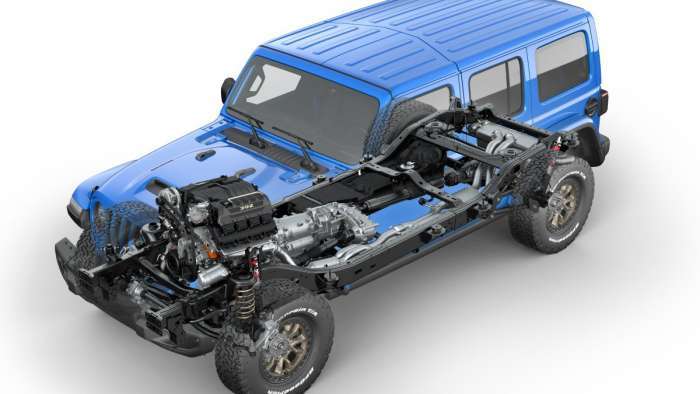 The next step in creating the 2021 Wrangler Rubicon 392 was the suspension setup. The team began by installing a spring setup that lifts the V8 Rubicon an inch higher than the current Rubicon Wranglers (two inches higher than non-Rubicon models). Those taller springs are paired with new Fox shocks that are tuned to handle the weight and power of the 392 Hemi, resulting in an SUV that performs great on- and off-road while preserving ride quality for the daily drive. 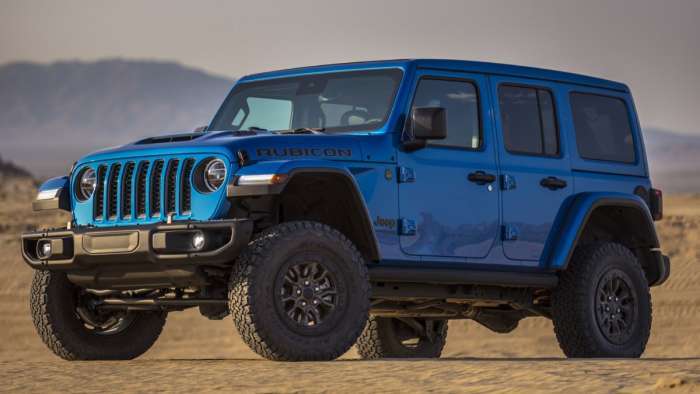 The result of this unique suspension setup is 10.3 inches of ground clearance and 32.5 inches of water fording ability. The Wrangler Rubicon 392 also has an approach angle of 44.5 degrees, a breakover angle of 22.6 degrees and a departure angle of 37.5 degrees. When coupled with the 48:1 crawl ratio and the Hemi power, there isn’t much that this Wrangler won’t climb through or over.

A Unique Appearance
The 2021 Jeep Wrangler Rubicon 392 production model will look a great deal like the concept, starting with the unique bulging hood with the 392 logo on each side of the raised center section. The hood has a large air inlet at the front which feeds the Hydro-Guide intake system, but should the scoop get blocked by mud, ice or other debris, there is a secondary engine air inlet under the hood. Also, the Rubicon 392 uses the free-flowing grille design of the current Gladiator. 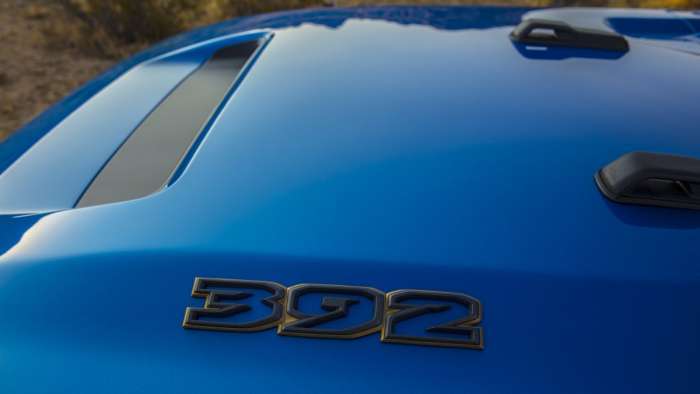 The standard exterior layout of the Wrangler Rubicon 392 includes the body-color hard top, body-color wheel flares, the Steel Bumper Group and the LED Lightning Group. All of the badges are trimmed in bronze, as are the tow hooks and the wheels. The package can be ordered in nine exterior colors - Black, Bright White, Firecracker Red, Granite Crystal Metallic, Punk ’n Metallic, Sarge Green Metallic, Snazzberry Metallic, Sting-Gray Metallic and Billet Silver Metallic. 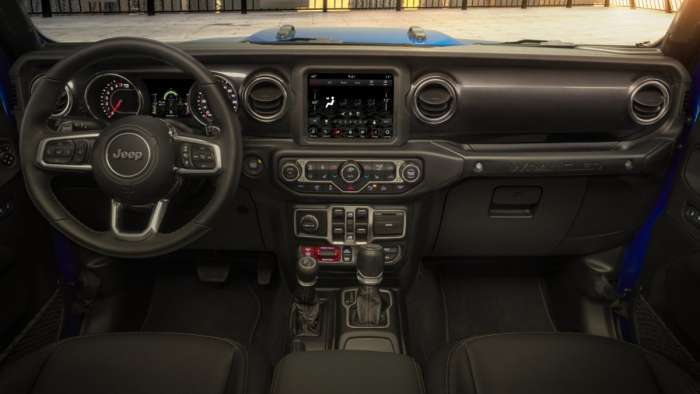 On the inside, the 2021 Wrangler Rubicon 392 comes heavily loaded. Black leather is the only interior color offered, with bronze stitching throughout the cabin and a bronze embroidered Rubicon 392 logo on the front seat backs. The Infotainment Group is standard, which includes the 8.4-inch UConnect touch screen, including control of the Off-Road Pages system and the rest of the interior functions. The Rubicon 392 also comes standard with the HD electrical switch bank, the Cold Weather Group, Remote proximity entry, the Safety Group and the Advanced Safety Group. 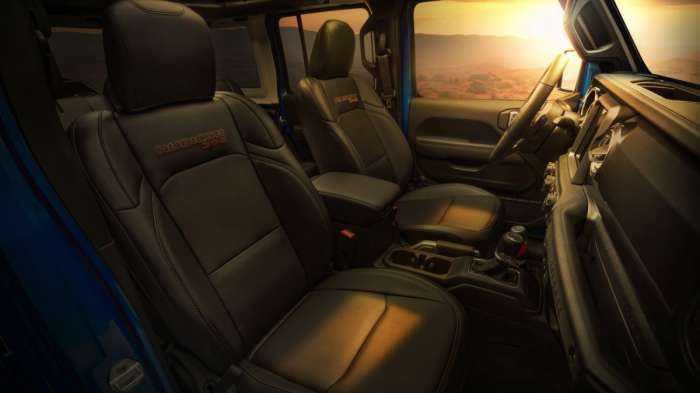 The only piece of the puzzle here is how much the 2021 Jeep Wrangler Rubicon 392 will cost when it goes on sale early next year, but in any case, we expect this to be a hot seller.