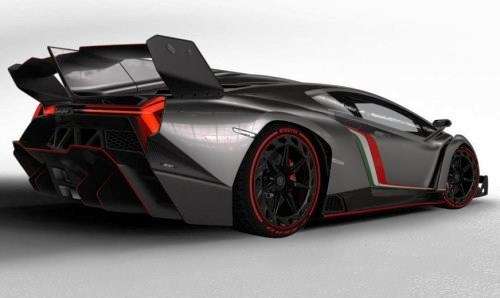 Introducing the most powerful Lamborghini ever: the Veneno LP740-4 (pics from all sides)

You are looking at the most powerful Lamborghini to ever meet a production schedule…a supercar designed to celebrate the Italian automaker’s 50th anniversary – with the striking new Lamborghini Veneno LP740-4 slated to make its formal debut tomorrow at the 2013 Geneva Motor Show.
Advertisement

We have known for quite some time now that Lamborghini was planning to introduce a production model that would be the most powerful supercar that they have ever sold to help celebrate the company’s 50th birthday but thanks to information leaked on the internet last night, we know that this historic car is the Lamborghini Veneno LP740-4. Details are limited on the Veneno but thanks to the bit of information included in the early leaked magazine image – we know the details that matter most to both buyers and dreamers.

As expected, the Lamborghini Veneno LP740-4 is powered by the same 6.5L V12 that is found in the current Lamborghini Aventador LP700-4 but as the name would denote (for those familiar with Lamborghini naming schemes), the Veneno offers a touch more power. The Veneno’s V12 funnels 740 horsepower to all four wheels via a 7-speed automated manual transmission and a high performance all wheel drive system. No other specifications are known but we do know that the Veneno has a top speed of 220 miles per hour and I’m guessing that this vicious Lambo will probably have a 0-60 time somewhere in the 2.7 second range. This means that not only is the Veneno the most powerful production car that the company has ever sold but it is also one of the quickest and fastest. That’s Quite an amazing bragging right considering the long list of ultra high performance cars introduced over the last 50 years.

When the company began teasing the car that we now know as the Lamborghini Veneno LP740-4, we expected very much that it would feature the same V12 drivetrain as the Aventador but the styling of the new supercar was a mystery. We expected that the most powerful Lamborghini ever built would have some unique styling and that probably couldn’t be more true. The Veneno styling is really like nothing that we have ever seen before in terms of a production unit and while it is extreme – it is also beautiful. Across the front end, we can see a little bit of Sesto Elemento styling with the pointed center section while the sharply angled front end and headlights that extend well out past the front of the wheels is bolder than I could have predicted. Along the sides, the widebody racer design with indented doors, huge vents and tons of carbon fiber splitters and canards make this look like a race car that just needs some sponsors and a number.

While the front end of the Lamborghini Veneno LP740-4 is strikingly unique, the back end is obviously a little bit Sesto Elemento and a little bit thoroughbred race car. The LeMans style fin running from the roof back to the gigantic rear wing combined with the super aggressive lower rear diffuser – all of which is connected by an intricate weaving of carbon fiber – makes the back end look like it would be far more comfortable as a race car than a road car. Speaking of that, the lack of a clear place for a license plate makes me wonder how the company will address that on the production version if they expect this to be a road car. However, the lack of a license plate bracket does not detract from the sheer freaking awesomeness of the new Lambo supercar and the rear end is sheer rolling artwork.

Inside, the Veneno LP740-4 features the kind of carbon fiber clad cockpit that you would expect from a modern Lamborghini although the sole dark shot that we have doesn’t give us that great of a look at the spread.

One of the more shocking bits of information leaked on the new Lamborghini Veneno LP740-4 is the price and the fact that the company will build just three examples of this incredible machine. Needless to say, owning one of the three copies of the most powerful Lamborghini comes with a serious price tag and those fortune owners will have to shell out right around $4.6 million US dollars. Oh, and all three of them are reportedly already sold…so even if you have an extra five mil laying around, you won’t be able to buy one unless it is on the used car market.

The Lamborghini Veneno LP740-4 is scheduled to make its grand debut tomorrow at the 2013 Geneva Motor show and at that point, we should receive a full spread of details on this amazing new supercar. For the time being, check out the leaked images in the gallery above by clicking any of the thumbnails on the page.

Special thanks to Max for the email of images this morning!