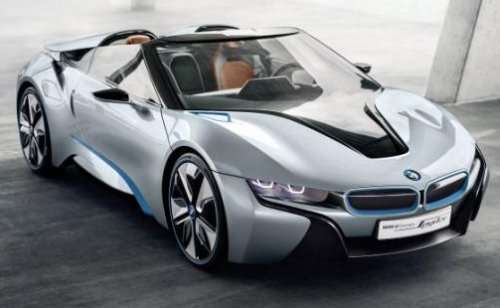 Introducing the BMW i8 Spyder

The folks at BMW have released the details on the newest entry in their super efficient i lineup with the online introduction of the new BMW i8 Spyder – a high performance hybrid roadster with incredible fuel economy and pure-electric, emission-free driving.
Advertisement

The new BMW i8 Spyder is mechanically identical to the hardtopped version of the i8 with a hybrid drivetrain feeding power to all four wheels. This begins with a 131 horsepower electric motor mounted up front to drive the front axles while a 1.5L gasoline engine is mounted over the rear wheels to drive those axles – also providing regenerative charging to the battery pack that is mounted in the middle of the i8 Spyder. All said and done, this through-the-road hybrid drivetrain sends a total of 354 horsepower and 405lb-ft of torque to the road for an engaging, high performance driving experience but more importantly, the design of this hybrid setup should afford the BMW i8 Spyder somewhere in the area of 78 miles per gallon based on the current European fuel economy figures. This system also allows the driver around 19 miles of pure electric drive in a front wheel drive mode but when the lithium ion battery pack has been drained, the gasoline engine fires up to provide propulsion and charging to continually improve the fuel economy of the futuristic roadster.

Where the BMW i8 Spyder differs from the hardtop model is fairly obvious from the name, with the sleek roofline of the early EfficientDynamics Concept being removed for that extra aspect of open-air driving. Unlike the coupe that offers seating for four, the i8 Spyder only offers seating for two while the back seat area has been replaced by a storage space for two compact electric scooters. In addition to the removal of the roof and the rear seating area, the wheelbase has been shortened slightly and while the doors still open in a unique (and very cool) upward design, the i8 Spyder doesn’t have the door frames that the coupe does. Also, the doors themselves appear to be much thicker in the Spyder – presumably to help make the vehicle sturdier in the lack of a roofline. The result is a sporty roadster that still maintains the perfect 50/50 weight distribution so we can expect that the i8 Spyder will offer every bit as much handling perfection as the coupe. Finally, for those who are worried about getting caught out in the rain, the BMW i8 Spyder comes with a folding two panel roof that locks out the elements when open air cruising hits rough weather.

All said and done, the BMW i8 Spyder is capable of dashing from 0-62 miles per hour in under five seconds while hitting an electronically governed top speed of 155 miles per hour. Those are pretty impressive figures for a sports car that can also offer in the area of 78 miles per gallon and offer around 20 miles of conservative, pure electric driving.

Even though the German automaker has introduced the BMW i8 Spyder on the internet, there has been no indication as to when it will make a formal public debut. However, with the introduction coming just a few days before start of the 2012 New York International Auto Show, perhaps this is a hint at what BMW has coming to the Big Apple.

Check out the gallery on the right of the new BMW i8 Spyder by clicking any of the thumbnails!

Elon Makes a Cybertruck Statement With an Action, But Quiet in Words
Tesla's Record Month in China: Doubled Registrations in March 2021
END_OF_DOCUMENT_TOKEN_TO_BE_REPLACED