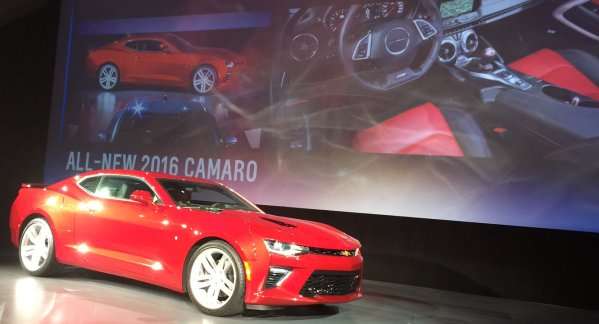 Images from the 2016 Chevrolet Camaro Debut in Detroit

After months of speculation and waiting, the 2016 Chevrolet Camaro made its grand debut at a private event on Detroit’s Belle Isle and here are just a few shots of the 6th gen GM muscle car from the big debut.
Advertisement

Over the next few days, we will bring you every bit of information that you could want to know about the 2016 Chevrolet Camaro, but today, we bring you a look at the car at the debut along with the basic specs for the next generation muscle car.

The 2016 Camaro SS
The car that introduced the world to the 2016 Chevrolet Camaro was a bright red 2SS model with a two tone red and black interior. As we saw in the leaked images yesterday, the 2016 Camaro has a more chiseled front fascia with slimmer headlights, a slimmer upper grille opening and a larger lower grille opening. The new Camaro has LED headlight trim around projection headlights with LED fog lights mounted in the aggressive lower front fascia of the SS package. Out back, the new Camaro has a slightly higher posture, creating a more extreme ‘rake’ from back to front with new LED trimmer taillights ushering in a new rear lighting look compared to the 5th gen models. Overall, the 2016 Camaro is the evolutionary refresh that we expected, but this sharper new exterior design should resonate well with the Camaro-buying community.

The 2016 Camaro Engine Lineup
While the exterior design of the 2016 Chevrolet Camaro is what draws the most attention, those performance car lovers out there are surely far more concerned with what will come under the hood.

As expected, the LT1 V8 from the C7 Corvette powers the 2016 Camaro SS and the newest 3.6L V6 is also available, but the surprise is the new turbocharged 4-cylinder engine. After so many people wrote off the idea of a turbo-4 Camaro, today’s announcement makes it official that there will be a turbocharged 4-cylinder 6th gen Camaro. Also, we know that all three engines are available with either a 6-speed manual transmission or an 8-speed automatic transmission. This new turbocharged 4-cylinder engine is a 2.0L mill that will deliver 275 horsepower and 295lb-ft of torque, making it quite a bit less powerful than the new 2015 Mustang EcoBoost, but GM promises that the 4-cylinder Camaro will be the most efficient Camaro ever. With power numbers like that, it should probably be the most fuel efficient car in the American muscle car segment as well.

Next up we have the new 3.6L V6, which gets the expected increase in horsepower when fitted into the engine bay of the 2016 Camaro. This new V6 delivers 335 horsepower and 284lb-ft of torque, making it the most powerful of the V6 muscle cars. Finally, the LT1 V8 that debuted in the 2014 Corvette Stingray is officially the engine of the 2016 Camaro SS and this premium engine delivers 455 horsepower and 455lb-ft of torque. This new LT1 makes the 2016 Camaro the most powerful Camaro SS of all time.

Stay tuned for more in-depth coverage of the 2016 Camaro this coming week but in the meantime, check out our gallery of live Camaro debut images by clicking any of the thumbnails above!