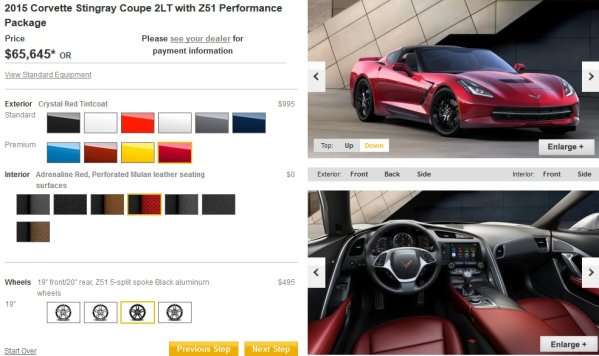 How I Would Build My Ideal 2015 Chevrolet Corvette Stingray

Now that the 2015 Chevrolet Corvette Stingray is becoming readily available around the country, I wanted to take a quick walkthrough of the configurator tool to price out my ideal C7 Vette, which will most certainly include some features that weren’t offered with the 2014 models.
Advertisement

The other day I was communicating with a reader through social media and he asked me if I thought the extra cost of the higher end trimlines in the C7 Chevrolet Corvette Stingray were worth getting. While it is always nice to have all of the best features that a model has to offer, I got to wondering if the $15,000 price tag between the Corvette 1LT and the Corvette 3LT/Z51 was worth the markup so I took to the 2015 Corvette configurator to see which package and which options I personally would pick were I to order a brand new Corvette today.

Which 2015 Corvette Stingray to Buy?
The first decision when pricing out a 2015 Chevrolet Corvette Stingray is whether you want a coupe or a convertible. The coupe starts at $54,995 and the droptop starts $5,000 higher. Im really not a convertible guy, so I would go with the coupe and that brings us to the big question – which trimline to pick?

The 2015 Chevrolet Corvette Stingray comes in the same 3 basic trimlines as the 2014 models (1LT, 2LT, 3LT) and each of those can be ordered with or without the high performance Z51 package. First off, I would absolutely opt for the Z51 package as for $5,000, you get an incredible level of added content, including a bunch of goodies that improve performance including the NPP performance exhaust system that adds 5hp and 5lb-ft of torque, a performance brake package, a performance suspension setup, unique wheels wrapped in high performance tires and many other features. In short, you want the Z51 package. As for the trimline that comes down to a matter of preference. If you only care about going fast, the 1LT package is all you need, but to get things like the full color heads up display, the Bose premium sound system and heated/cooled seats, you will need to go for the 2LT package. 3LT adds more luxurious items like higher end leather, suede interior trim, the Performance Data Recorder and navigation. For the money, I wouldn’t add the 3LT package, but I would definitely want the features of the 2LT package along with some standalone options that I will get to in a bit.

In short, my ideal 2015 Corvette Stingray coupe would be a 2LT Z51 model in bright red with the black and red leather interior. I know, a little red Corvette is so cliché but the car just looks so good in red, I couldn’t pass it up. The car described above would have an MSRP of $64,155 before any options.

Which 2015 Corvette Stingray Options to Pick?
After picking the trimline of my 2015 Chevrolet Corvette Stingray coupe and picking both the insider and outside colors, the time comes to pick the options. Before even leaving the color screen, I would tack on an additional $495 for the black aluminum wheel option as you just cant go wrong with black and red.

After the wheels, you get into the real Corvette option nitty gritty beginning with the Stingray Exterior Appearance package that adds a few minor features for $800. That isn’t my thing, but I can see how some people would like to have a Stingray branded car cover. Next, you get a few mechanical options including the 8-speed automatic transmission ($1,725), a battery protection package ($100), Magnetic Selective Ride Control ($1,795) and either red or black brake calipers for $595. I would stick with the 7-speed manual transmission, I wouldn’t bother with the battery package and I can paint my own brake calipers – but I would most certainly opt for the Magnetic Selective Ride Control system.

Next up, there is a very long list of exterior options for the 2015 Corvette Stingray with things like different wheels, different types of stripes, different colored roof panels, uniquely painted badges and some other smaller features like a car cover and underhood logos. I would get the Carbon Flash “Stinger” hood stripe, the carbon fiber dual roof package (which comes with the transparent roof panel as well) and the carbon flash mirror and badge packages.

Finally, interior options are limited for the 2015 Corvette Stingray, but I would upgrade to the navigation radio setup and the Competition seats.

The Final Price of my Ideal Stingray
When you incorporate all of the options that I picked above, my ideal 2015 Chevrolet Corvette Stingray would carry an MSRP of $73,930. For those wondering, equipping all of the same basic options to a 3LT coupe would bring about an MSRP of $77,325, so there is about $3,500 worth of items on the 3LT that I wouldn’t need to love everything about the new Corvette.

How would you build your 2015 Corvette Stingray? Click here to build it online now and tell us in the comments what your ideal C7 would cost.

Pete Neild wrote on October 9, 2014 - 11:24pm Permalink
Your option choice for the "tech" was exactly the same way that I set my 2014 up. But you and I differ on the colors and the roof package.
Patrick Rall wrote on October 13, 2014 - 12:55pm Permalink
What color and roof package did you get?
Pete Neild wrote on October 13, 2014 - 1:08pm Permalink
Patrick - I went with the Laguna Blue, translucent roof, and Kahlahari w/suede. Black wheels and black calipers. First thing I did was black out the chrome stripe that splits the grill. Only Chrome are the emblems. I recently parked it next to a 3LT Lime Rock Green with Brownstone, which I thought was VERY cool, but 2 of the 3 people that I saw took note of the side-by-side, noticed mine first. So with this car it depends on how much attention you want to attract. I like talking about it to people that "get it"; so the Blue was a good choice.