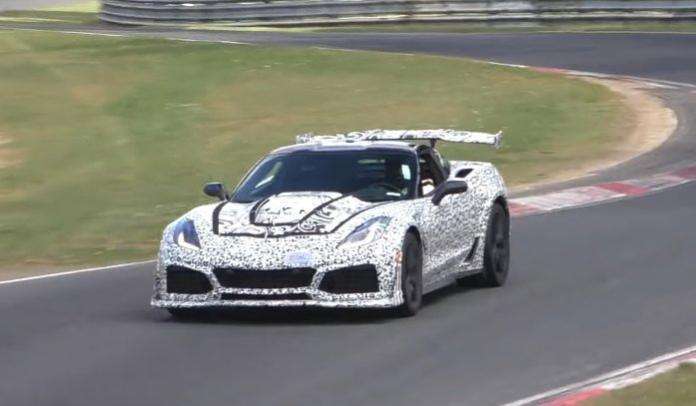 How the C7 Corvette Z06 and ZR1 Might Differ

The future Chevrolet Corvette ZR1 has been a hot topic in the American high performance world for years now, but we have received several questions about how it might differ from the current Corvette Z06 – so today, we bring you a look at how the C7 ZR1 could differentiate itself from the C7 Z06.
Advertisement

Now, before getting into how I think that the C7 Chevrolet Corvette ZR1 will different from the C7 Corvette Z06 that is on sale right now, I should point out that there has been no official word from GM on the existence of a new ZR1. At no point has anyone from GM gone on the record as saying that there is a new, more potent C7 Corvette on the way, but the spy shots and my own eyes don’t lie – GM is definitely working on a hotter supercar, although the name may or may not be the ZR1.

The reason that I am doing this piece today is that while driving home this weekend near the GM Proving Grounds in Milford, Michigan, I saw what we all believe to be the C7 Corvette ZR1. The same car that has been caught blasting around the Nurburgring with the familiar black-and-white camo, a massive rear wing, a beefier hood and other added aero bits rolled by me while I was waiting in traffic to turn into my neighborhood. The traffic prevented me from making a speedy turnaround to chase the mysterious Corvette down for pictures, but I got a good look at it and so did my dad, who was riding in the passenger seat. You can check out the car that I’m talking about in the video below, which was where I got the screenshot of the Corvette at the top of this piece.

He asked me what so many commenters have asked in the past few months – what makes that Corvette different from the current Z06? Since it has been asked so commonly, having finally seen this car in person in broad daylight, I figured that this would be a good time to talk about what I believe will make the ZR1 an even greater supercar than the current Z06.

The first and most obvious advantage of the C7 Corvette ZR1 is the aerodynamics package, which we expect could come with two different rear wings – both of which are larger than what is found on the Corvette Z06. Many of the ZR1 test cars have been spotted wearing a huge rear wing, similar to what is used on the Dodge Viper ACR, but there have also been pictures of the same car with a slightly smaller rear wing. This means that the ZR1 could have different levels of aerodynamic performance, or there could be something like a Z07 package which introduces the bigger wing.

Also, the car which we believe to be the Corvette ZR1 will have unique styling on the front fascia, with improved cooling flow and greater levels of front end downforce while a hood with a raised center section could improve aero properties and make room for a larger engine.

Speaking of engines, it is widely believed that the C7 Corvette ZR1 will have more power than the current Z06. With the LT4 in the Z06 delivering 650 horsepower and 650lb-ft of torque, I expect that the ZR1 will have power numbers starting with a 7, likely allowing the next super-Vette to overpower the Dodge Hellcat cars at 707 horsepower and 650lb-ft of torque. This added power could be achieved by retuning the Z06 LT4, especially if there have been cooling improvements made around the front of the car.

Next, the Corvette ZR1 will likely have a suspension setup which is even more track capable than the setup in the current Z06. It is feasible that GM will go away from the Magnetic Ride Control system from the Z06, opting instead for the Multimatic DSSV dampers from the Camaro ZL1 1LE and the previous generation Camaro Z28. While these dampers don’t offer the same level of on-the-fly customization for road use, they have been proven to offer superior on-track performance, so switching to the Multimatic setup would almost surely allow the ZR1 to get around a road course more quickly than the Z06.

Finally, it seems unlikely that GM will cook up a better braking system than the carbon ceramic setup on the Z06, but there could be some small changes in that department. However, we can bet that the ZR1 will have lighter wheels in the stickiest tires ever offered on a production, road-going Corvette.

So, while we don’t know officially that a Corvette ZR1 is coming – something hotter is coming, we just don’t know when.