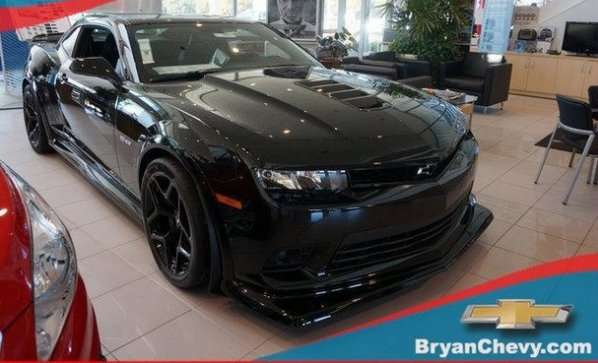 If you want a Chevrolet Camaro that will hang with just about any production car on a road course, but you couldn’t stomach the $75k price tag of the “old” 2015 Camaro Z/28, you are in luck, as Chevy dealership in Louisiana has a brand new 5th generation Z/28 in their showroom with a price tag almost $20,000 below the original MSRP.
Advertisement

This is not an old news story – there is a brand new, 2015 Chevrolet Camaro Z/28 on sale at a Bryan Chevrolet in Metairie, Louisiana and as we head into the final weeks of 2016, this previous generation muscle car is still looking for a home. Best of all, anyone willing to travel to Louisiana to buy this 2015 Camaro will save a bundle off of the original MSRP, as the dealership has the car marked down by $19,670. This brings the price with options down from $76,150 to just $56,480, making this 5th gen Camaro Z28 less expensive than the 2016 Ford Shelby GT350 Mustang MSRP of $56,770).

Why So Inexpensive?
I imagine that a great many people reading this are wondering why Bryan Chevrolet would be selling a 2015 Chevrolet Camaro Z/28 – let alone selling one at a $19k discount under MSRP.

As for the first question, I really can’t imagine why this 2015 Chevrolet Camaro Z/28 still hasn’t sold as we near the beginning of the 2017 calendar year. This 2015 Z/28 is likely sitting among 2017 Camaro ZL1s and while I don’t know for sure, I would guess that this is the only new 2015 Camaro Z/28 left in a dealership showroom in the US. Perhaps the dealership has been using it to draw in foot traffic until the new ZL1 came out and now that the new super Camaro is here, they are ready to get the 2015 Z/28 out of the showroom.

In any case, while we don’t know for sure why Bryan Chevrolet still has a 2015 Camaro Z/28, the cause for the $19,670 discount is simple – this car is effectively two years old. At this point, the dealership has to be eager to make room in the showroom, so they have priced this 505hp Camaro to sell. More importantly, the collection of discounts makes this Camaro Z/28 less expensive than the current Ford Shelby GT350 Mustang while also offering very comparable (if not better in some situations) real world performance.

So, if you are looking for a new muscle car with a warranty that will dominate pretty much any road course in the world when pitted against other production cars, a trip to Bryan Chevrolet in Louisiana could net you the 5th gen Camaro Z/28 for a heck of a bargain price.

Click here for a closer look at the 2015 Chevrolet Camaro Z/28 in question, including pictures of the 505hp track beast.

Thanks to Big Max for the dealership link!