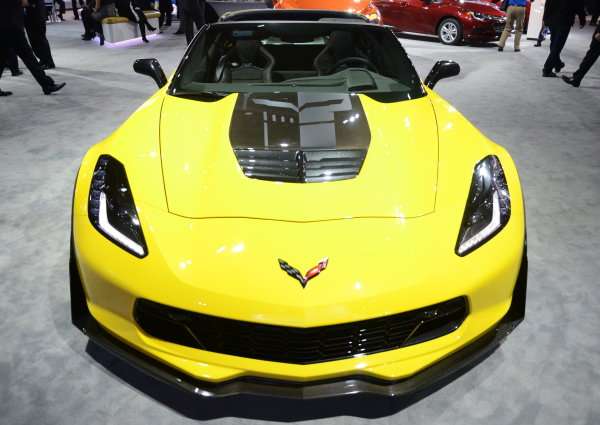 Corvette Z06 Getting Improved Cooling for 2017

The C7 Chevrolet Corvette Z06 has been criticized for the fact that it goes into a low power mode when driven hard for an extended period of time, but when the 2017 Z07 arrives, it will be more capable of tearing up the road course with an improved cooling system – including a redesigned hood.
Advertisement

When the C7 Chevrolet Corvette Z06 was introduced, it was marketed as the most powerful factory production car from GM ever, as well as being the most track capable road-going GM car ever. However, when private owners began taking their new supercharged Corvette to the race track – or simply driving the car hard in the heat for extended periods of time – the engine enters a low power mode.

Upon experiencing this power loss, owners of the new Corvette Z06 contacted General Motors, concerned that something was wrong with their new Chevy supercar. The good news was that there wasn’t anything wrong with their cars, but the bad news was that the LT4 is designed to cut power when the engine gets hot. GM insists that this low power mode is essential to provide a car with so much power and a lengthy factory warranty, and that most owners won’t push the cars hard enough to experience the power loss.

While the GM execs who insist that the low power mode wont impact many owners, the fact of the matter is that the C7 Corvette Z06 is billed as the most track capable Chevy ever and there are plenty of owners who take them to the track. Those owners have found that after just a few laps on a hot day, the car loses power as their lap times climb – making the car far less track capable.

GM has pointed out that an aftermarket tune can remove the low power mode, but that will also void the engine warranty of the new Corvette Z06.

This has created a bit of bad press and some unhappy owners, but based on a report from Motor1, GM plans to rectify the problem for the 2017 model year, by improving the cooling systems of the Corvette Z06.

A Cooler 2017 Corvette Z06
According to the crew from Motor1, Corvette Chief Engineer Tadge Juechter has explained that less than 5% of Corvette Z06 owners ran into this heat-induced power loss, but the team will make some changes for the 2017 model year to help the LT4 engine run cooler.
The details are short right now, but we know that the 2017 Corvette Z06 will have a larger supercharger cover, which will likely allow for better cooling around the body of the supercharger. The 2017 model year will also feature a new hood with improved air flow, which will allow more cool air to enter the engine bay and/or more hot air to escape.

Finally, there are other cooling changes teased, but we won’t find out what else the 2017 Corvette Z06 will get until we are closer to the dealership arrival of the new model year.

If the GM engineers can lower the temperature of the engine bay and lower the engine of the supercharger housing – thus lowering intake air temperatures – the LT4 engine should be able to provide better power for longer periods of time. Should they be able to keep the engine cool enough to avoid the low power mode altogether, the team will have effectively cured the biggest problem with the 650 horsepower Corvette.

DL Fletch wrote on November 26, 2016 - 7:36am Permalink
How to keep your C7 Z06 cool
Greg Dreyer wrote on December 19, 2016 - 5:58pm Permalink
Will there be retro fit fixes for previous and current year C7 Z06/Z07's
BillD64E wrote on December 24, 2016 - 2:31pm Permalink
The problem isn't as bad as some people make it out to be. My 15 Z06 with the added GMPP Secondary Radiator has not even come close to over heating or experiencing a power loss due to over heating. I have 17 track days on the car running in ambient temps from the mid 50s to the mid 90s and the highest coolant temp I have seen is in the mid 220s and the highest oil temp is in the mid 270s. Not bad when running 2:08 laps at VIR with top speeds in the mid 150s. There are plenty of track drivers with similar experience. Bill

Tesla-Funded Research Reveals One of The Biggest Mysteries of EV Battery
Tesla Tesla Buyer Nets a Whopping $12,000 Discount After Asking for Reduction
END_OF_DOCUMENT_TOKEN_TO_BE_REPLACED