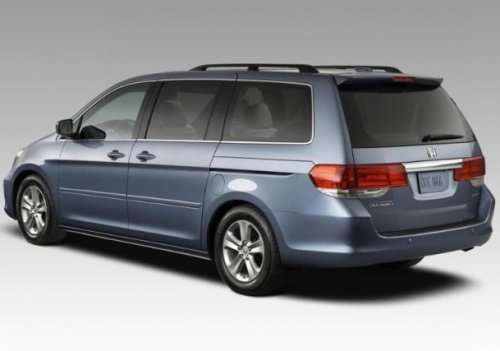 American Honda and the National Highway Traffic Safety Administration have announced a recall of over 45,000 Honda Odyssey minivans over a concern that the gas strut components of the power rear liftgate system could fail prematurely and lead to the door falling unexpectedly.
Advertisement

This new Honda Odyssey minivan recall relates specifically to 2008 and 2009 model year vehicles equipped with the power rear liftgate system. This system contains a pair of charged gas struts that, due to a manufacturing flaw are prone to early failure. When these struts fail, there is a greater chance of the rear liftgate closing suddenly and expectedly – increasing the chances of injury when that large, heavy door slams down on someone who is accessing the rear cargo area.

This recall comes after the NHTSA opened an investigation in September of 2011, after the feds received 7 complaints of the liftgates slamming suddenly. In two of these cases, injuries were reported due to someone being struck by the slamming liftgate. The result of this investigation was that the struts used in the 2008-2009 Honda Odyssey had a manufacturing flaw and that they need to be replaced.

It is not unusual for these gas struts to gradually wear out and lose the ability to hold up the door but for model year vehicles from 2008 and 2009 to already be experiencing these issues is unusually quick, hence the recall of the Honda Odyssey to replace the struts. Due to the nature of these struts, as they gradually wear out they may still hold the door up as designed by once both struts have expired – especially when it gets cold out. In cold weather, aging struts are likely to provide less tension so when the door system is opening and someone was to step under the liftgate, when the electrical opening system stops working that heavy rear door could come down with some ferocity.

Luckily, the only danger posed by this Honda Odyssey recall is easy to avoid until the vehicle has been serviced, simply by making sure that the door opens and stays open without sagging. These struts typically go bad progressively rather than all of a sudden and all at once, so owners who are careful can avoid any injury simply by paying attention to the function of their Honda minivans rear liftgate. Realistically the likelihood of getting injured by this recall is very slim but recall statements like this one show the dedication by automakers and the NHTSA to make sure that American auto consumers are as safe as possible.

This new Honda Odyssey liftgate recall is expected to begin on or before March 13th, when owners of the 45,747 affected minivans will be asked to return to their local Honda dealership where a technician will replace the gas struts free of charge to the owner. For more information, owners of 2008 and 2009 Honda Odyssey minivans can call Honda Customer Service at 1-800-999-1009 in reference to recall campaign S22.