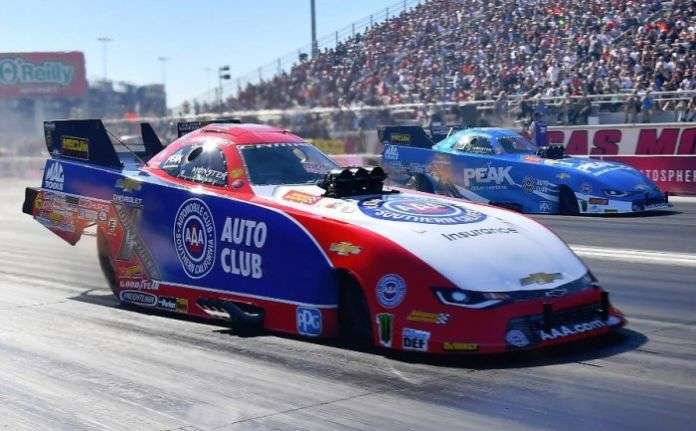 Robert Hight and his John Force Racing Chevrolet Camaro funny car lost to teammate Courtney Force in the finals at this weekend’s Toyota Nationals in Las Vegas, but in making it to the semifinals, Hight was able to move into the top spot in the 2017 Funny Car Championship battle with only one event left on the season.
Advertisement

The Don Schumacher Racing Dodge Charger drivers have dominated the NHRA Funny Car class this season, winning 15 of the 23 events run so far on the 2017 schedule. However, due to the Countdown to the Championship system resetting the points ahead of the final 6 races of the year coupled with two wins and a handful of strong runs – Robert Hight and his Chevrolet Camaro from rival team John Force Racing have taken the top spot in the championship chase with just a single race left on the year.

Aside from the quarter of Don Schumacher Racing drivers and their Dodge Charger funny cars, Robert Hight and his John Force Racing Chevrolet Camaro have had the most successful season (of any non-Dodge drivers). Hight drove his Camaro to four class wins, including two during the Countdown to the Championship six-race series. Hight also had one final round where he didn’t win, so in addition to his four wins, he pulled down one runner-up finish this season.

Really, only Ron Capps has had a better season that Robert Hight, with Capps and his Charger taking eight event wins and four runner-up finishes during the 2017 campaign. So in 23 races, Ron Capps was in the final race more than half of the time and in doing so, he won a third of the races. This allowed Capps and his Dodge to amass a huge lead in the class standings, but when the Countdown to the Championship portion of the schedule began – Capps’ lead was cut down to almost nothing. Since then, Robert Hight has driven his Camaro to the winner’s circle twice while turning in a handful of strong runs in those races that he didn’t win.

Coming into the Las Vegas Toyota Nationals last weekend, Robert Hight was only 24 points behind Ron Capps. Hight qualified third to Capps’ sixth, but it was actually John Force who had the biggest impact on the flip in the championship standings.

Taking the Lead in Vegas

In the first round in Vegas, John Force beat Ron Capps convincingly and he then lost to Robert Hight in the second round. Hight would lose in the semifinals to Courtney Force, but by advancing to the semis while Capps lost in the first round, the JFR Camaro driver moved into the top spot in the 2017 Funny Car Championship run.

To be exact, Robert Hight and his Camaro are 15 points ahead of Ron Capps and his Dodge Charger, so the funny car title is going to come down to which driver has a better outing at the season finale in Pomona, California. If Hight can outlast Capps, he will win the championship, but Capps is close enough that a strong run of his own in the final race of the season could net him yet another NHRA championship.

However, Robert Hight controls his own destiny, so if he can drive his Chevrolet Camaro to a higher finishing position in California in a few weeks – the title will be his. This would be the first championship for the modern Chevrolet Camaro funny car program while being the second title of Hight’s career, having won back in 2009 in a Ford Mustang.