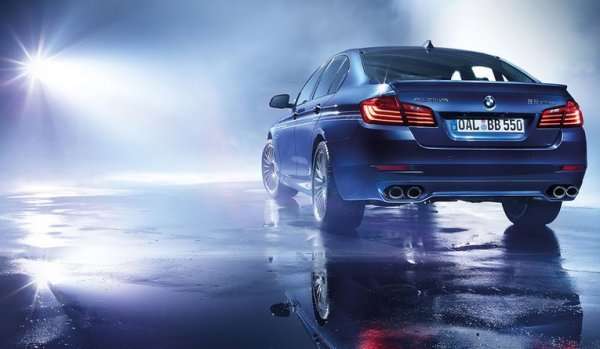 The new Dodge Charger SRT Hellcat is the quickest and fastest 4-door production sedan in the world, but when the newest Alpina version of the BMW M5 arrives later this year with 591 horsepower and 590lb-ft of torque, it will have a top speed that will challenge that of the 707 horsepower Charger.
Advertisement

When the 2015 Dodge Charger SRT Hellcat was first introduced last August at a pre-event media gathering ahead of the Woodward Dream Cruise, Dodge brand CEO Tim Kuniskis stated that it was the fastest 4-door production sedan in the world, with an official top speed of 204 miles per hour. It is also the quickest sedan with a stock quarter mile time of 11 seconds flat and a 0-60 time of just 3.7 seconds, but with 707 horsepower, it shouldn’t come as a surprise that it is the quickest and fastest production sedan in the world. There is even a video showing the Charger defending its title against some of the best performance sedans in the world, including the BMW M5. Click here for a closer look at that video.

However, when the new Alpina B5 Bi-Turbo arrives later this year, its twin turbo 4.4L V8 will offer far less power, but BMW expects that the limited edition sedan will have the same top speed as the Hellcat Charger.

The Alpina B5 Bi Turbo Edition 50
The BMW M5 is one of the most powerful and most respected sport sedans in the world with a twin turbo, 4.4L V8 delivering 560 horsepower and 500lb-ft of torque. The standard M5 will dash from 0-60 in 4.2 seconds en route to an electronically limited top speed of 155 miles per hour. The M5 is awesome, but in stock form, it falls a little short of the 707hp Charger.

Fortunately, BMW’s tuning partners at Alpina have rolled out their new B5 Bi Turbo Edition 50, which celebrates the 50th anniversary of the BMW/Alpina performance models in the best way possible.

By adding power, performance and creating one of the fastest BMW sedans ever.

The new Alpina B5 Bi Turbo has a specially tuned version of the M5 engine that delivers 591 horsepower and 590lb-ft of torque. This bump in power allows the Alpina sedan to sprint from 0-62 in just 4.2 seconds, so it is a little slower on the low end when compared to the Hellcat Charger, but more importantly, the special edition Alpina B7 is expected to have a top speed of 328 kilometers per hour. That is 203.81 miles per hour and when rounded up, you get an official top speed of 204 miles per hour.

Of course it should be stressed that the Hellcat Charger’s official top speed was measured by taking an average of two runs on the same surface whereas the Alpina B5 Bi Turbo Edition 50 top speed may just be a manufacturer’s claim. This means that Alpina (or BMW) will need to prove that it can average 204 miles per hour to officially challenge the 707hp Charger, but this is the closest we have seen to any other 4-door sedan posing a real threat to Dodge’s world’s fastest sedan claims.

The Big Difference
The new Alpina B5 Bi Turbo Edition 50 is a high end luxury car with serious power while the Dodge Charger SRT Hellcat is an American muscle car in sedan form. The interior of the Hellcat Charger is very nice, but it cannot compete with the Alpina layout. Also, the Edition 50 is limited to just 50 units, so it will be very hard to get (and impossible to get in the US). Not surprisingly, this exclusivity and high level of luxury leads to a big price - 86,850 British Pounds or $128,468 in US dollars.

So the Alpina B5 Bi Turbo Edition 50 costs $128,468 while the Hellcat Charger starts under $65,000. The 707 horsepower Charger isn’t available in Europe right now and the Alpina super sedan may not available in the United States, so while the two are unlikely to ever meet on the street, it looks like Dodge could finally have a real challenge at their claim for the fastest sedan in the world.

Auto Motive wrote on March 31, 2015 - 8:32am Permalink
If the M5 can hit 205 good for them. I hope everyone understands the BMW isn't a muscle car and how many car shows does BMW have during the summer? We are talking about the king of Muscle CARS. Nothing on this planet can take away the awesomeness of the hellcat. History will tell our grand kids about the fastest production 4 door sedan in the world that grand dad owned and now is still in the family. Being a new model with the 6.1 after market performance options will eventually hit the market. The nitrous kits are very exciting with the new tech that protects the engine from blow outs. 75-150 hp single stage units for stock engines and the two stage 200-300 for built engines. Once the hellcats have this install watch out. We could have 9 seconds hellcats with a $3000 nitrous kit. Now for the rollcage install.
Randy wrote on March 31, 2015 - 12:44pm Permalink
You can't compare a modded car to a car you can go down and buy at your local dealership. If that's the case then I'm sure I could take a hellcat and make it even faster still.
Patrick Rall wrote on March 31, 2015 - 2:26pm Permalink
Just to be clear, you CAN buy an Alpina BMW in your local BMW dealership if you live in Europe. This is like buying a Shelby Mustang from Ford, except the Alpina models are more exclusive.
Randy wrote on March 31, 2015 - 2:41pm Permalink
Well if I am reading this correctly they are only going to make 50 of them, so it is very unlikely that you will be able to just walk in and buy one. You will have to special order it and be one of only 50 people to get one. The hellcat, on the other hand, is mass produced.
Patrick Rall wrote on March 31, 2015 - 5:45pm Permalink
I did address that at the end of the piece. It also isnt available in the US, or so it seems.

Toyota's First EV Will Have a Name of BZ: Toyota BZ
First Videos From Inside The Boring Company's Las Vegas Loop
END_OF_DOCUMENT_TOKEN_TO_BE_REPLACED