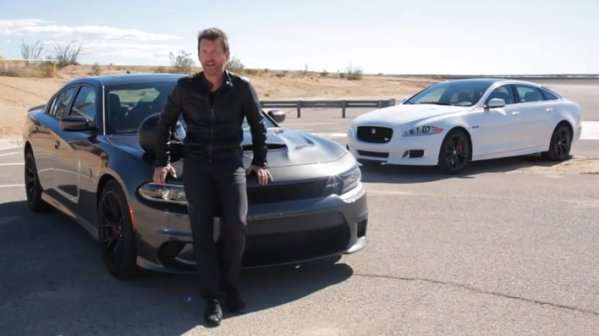 Hellcat Charger Beats the Best Sedans in the World (Video)

Since the day that the 2015 Dodge Charger SRT Hellcat was introduced, the Chrysler Group has insisted that it was the quickest, fastest and most powerful 4-door production sedan in the world – but a new video shows the Hellcat Charger backing up that claim against five of the highest performance sedans in the world.
Advertisement

Unless you live under a rock or enjoy driving a 50+ mpg hybrid every day, you probably know that the 2015 Dodge Charger SRT Hellcat is powered by a supercharged 6.2L Hemi engine with 707 horsepower and 650lb-ft of torque. That is more power than any production sedan ever sold in the world by any automaker, including the best known performance sedans from the European automakers. That power allows the Charger to dash from 0-60 in just 3.7 seconds en route to a top speed of 204 miles per hour – both of which are better figures than any other stock 4-door sedan sold in the world.

However, words on a page are a very different story than real world performance, so pro driver Justin Bell and the World’s Fastest Car Show got the Hellcat Charger and five of the other modern super-sedans from around the world and put them all head to head to find out which is truly the best performance sedan in the world.

The Rivals
The World’s Fast Car Show picked five of the most well-known performance sedans in the world along with the 2015 Dodge Charger Hellcat. This group included the Aston Martin Rapide S, the Jaguar XJR, the Cadillac CTS-V sedan, the BMW M5 and the Mercedes Benz AMG S65. With 707hp, the Charger is comfortably the most powerful, followed by the AMG at 621hp, the BMW at 575hp, the Cadillac at 556hp and both the Aston and the Jag pack 550 horsepower.

The Competition
The competition by the World’s Fastest Car Show to establish the world’s best performance sedan included three tests – 0-60, quarter mile and top speed run. After each of the first two tests, the two cars that performed the worst are removed, leaving just the strongest two cars to duke it out for the title.

The first round shows the Cadillac, the Mercedes and the Charger making their 0-60 runs, and with a time of 3.7 seconds, the Dodge beat the AMG (4.0) and the Cadillac (4.2). This eliminated the Cadillac and sent the Dodge and Mercedes into the round. The second half of round one had the Aston, the Jag and the BMW making their 0-60 runs, and the BMW handed out a pretty sound beating, with the Jag taking 4.4 seconds and the Aston taking 4.9 seconds. As virtual of this slow time, the Aston Martin was eliminated while the other two went to round two.

In round two, the four remaining super sedans headed to the quarter mile for a pair of head to head battles. First up, the Charger went at it with the BMW and while we don’t get to see the elapsed times, the Dodge edges out the BMW at the finish line. In the second run, the Mercedes ran the Jaguar, and while the Jaguar was 4 tenths slower to 60 in round one, the big cat pulled it together in round two and beat the AMG S65. This sent the XJR and the Hellcat to the final battle – top speed.

This video has plenty of high speed, high performance sedan clips with sounds that are music to a gearhead’s ears, so crank up your speakers and enjoy!

mike wrote on February 20, 2015 - 1:17pm Permalink
Definitley prefer the hellcat or the Jag over the overrated uselessly expensive Mercedes.
Parks McCants wrote on February 21, 2015 - 9:33pm Permalink
I must admit Patrick, I caught view and ear-shot of an SR-T or Hellcat (I can't tell the difference) on the streets of Eugene,Or. Most impressive-as is this video. What catches my attention while watching the video is the evident stability of Hellcat under track conditions. Lovin' it!