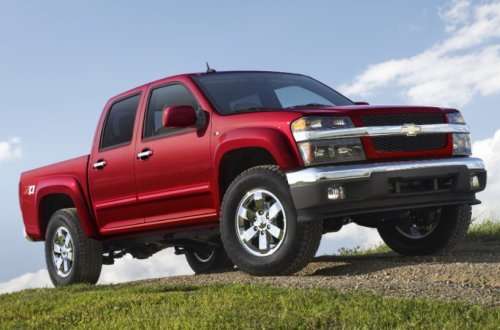 GM recalls almost 150,000 trucks due to a missing hood latch

The National Highway Traffic Safety Administration has announced a new recall for select General Motors midsized pickup trucks over a concern that these vehicles may have not had the secondary hood latch installed during assembly – possibly allowing the hood to come up while the vehicle is being driven.
Advertisement

In these 2010-2012 GMC Canyon and Chevrolet Colorado pickups, the secondary hood latch may not have been installed during the assembly process. The secondary hood latch is the item that you have to manually trigger by sliding your hand under the hood (or through the grille in some other models) once you have pulled the hood release inside of the vehicle. Should the primary hood latch that is controlled by the interior level fail – or should the driver pull that level accidentally thinking that it is the parking brake release – the hood will come up once the vehicle has gotten up to speed. In a vehicle that is properly equipped with the secondary hood latch, when that interior lever has been pulled to open the hood, the secondary manual latch will catch the hood and prevent it from opening while driving. However, if the primary latch is released and there is no secondary latch, there is no “maybe” about the hood coming up. The force of the air blowing through the grille and over the top of the vehicle is more than enough to lift the hood a bit and once the air going over the vehicle catches the leading edge of the hood – it opens quickly, usually slamming against the windshield.

Luckily, there have been no reports of any accidents or injuries stemming from this hood latch recall with the Chevy Colorado and GMC Canyon but with the elevated risk of an accident and the fact that these midsized pickups do not comply to Federal Motor Vehicle Safety Standard # 113 pertaining to Hood Latch System – GM is making the quick call to get these pickups back to dealerships. The automaker expects to begin contacting owners on or around January 17th 2013 at which point owners will be asked to return to their local dealership. While there, a technician will inspect the vehicle for the presence of a secondary hood latch and if one is not present, the dealership will replace the hood with one equipped with the crucial latch. This work will all be done free of charge and owners who are worried about their vehicle being affected can inspect the vehicle themselves. If you can pop the hood from the interior and then lift the hood without triggering the secondary latch under the hood – you might want to call your dealership right away. Owners can also contact Chevrolet at 1-800-630-2438 or GMC at 1-866-996-9463 in reference to GM recall campaign number 12319.

Anonymous wrote on December 20, 2012 - 3:49pm Permalink
Most vehicle hoods end at least 6in from the base of the windshield and open wide enough that the driver can see through the lower part of the windshield even with the hood up. Your best-case scenario sounds overly dramatic. Your worst case is blown even more out of proportion. Modern vehicle windshields don't shatter! Granted, your scenarios may combine to spider-web the windshield so badly the driver can't see. I had this happen when I hit a deer on the freeway that bounced into my windshield (didn't come through), but I was still able to safely get to the shoulder and stop.