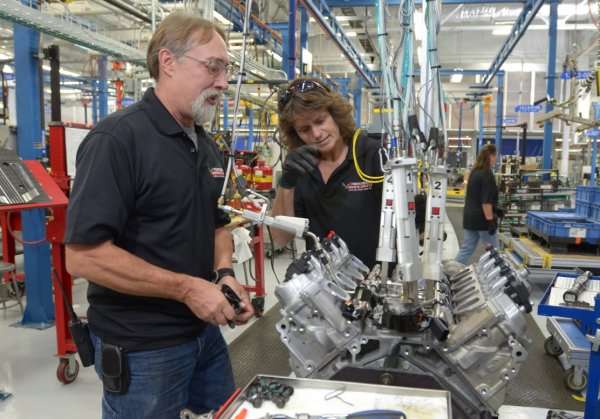 The new C7 Chevrolet Corvette Z06 is so popular heading into its second model year that General Motors has announced a $44 million expansion of the Bowling Green Assembly Plant to increase the production capacity of the Performance Build Center, where the 650 horsepower LT4 engine is built for every C7 Z06.
Advertisement

The C7 generation of the Chevrolet Corvette has proven to be a smash hit, posting impressive sales numbers every month since first hitting the market back in late 2013. The more budget-friendly Stingray has obviously accounted for the vast majority of C7 Corvette sales, but since being introduced for the 2015 model year, the new Corvette Z06 has been insanely popular. In fact, the new Z06 currently accounts for around one third of vehicle production at the Bowling Green facility, so for every 2,000 Stingrays built in Kentucky, there are 1,000 new Z06s built on the same line.

This demand for the C7 Corvette Z06 more than a year after first hitting the market has led GM to make another sizeable investment in the Bowling Green plant, this time to expand the Performance Build Center portion of the facility where the LT4 engine for the Corvette Z06 is built – and where GM holds the Build Your Own Engine program for the new super-Vette.

“Coupled with the investment, for $439 million for a new paint shop and facility upgrades announced in May, GM has committed $483 million to Bowling Green this year alone,” said plant manager Kai Spande. “These significant investments indicate the company’s confidence in Bowling Green, the Performance Build Center and our skilled workforce.”

Moving the Performance Build Center to the Bowling Green plant makes perfect sense, but as the new Corvette Z06 has proven to be a very hot seller, the company is looking to expand the capacity of the area that builds each and every LT4 V8 by hand. This $44 million investment will allow the company to expand and improve the Performance Build Center and as a result of this expansion comes 36 new jobs.

Construction to the Performance Build Center is expected to begin in January of 2016.

Build Your Own LT4
The Build Your Own Engine program for the 2016 Corvette Z06 is one of the most interesting packages in the market today. This $5,000 option allows new Z06 owners to literally come in and build their own LT4 engine with the supervision of a trained engine building expert and for those who can afford the extra $5,000, it is worth every cent. I was fortunate enough to watch a buyer build his own engine when the company introduced the program a few years back and it truly is an awesome experience for the buyer.

Big Investment in the Corvette’s Future
This $44 million investment is just the latest of more than $617 million that GM has spent on the Bowling Green facility over the past five years. Mind you, the only vehicle built in Bowling Green is the Corvette and while some of the LT4 engines built at the Performance Build Center will end up in the new Cadillac CTS-V, you can really assign much of this investment money to the future of the Chevrolet Corvette.

This started back in 2011, when GM spent $131 million to prepare the plant for the production of the C7 Corvette. In early 2013, the company spent $3.5 million to move the Performance Build Center from Wixom to Bowling Green and Earlier this year, the company invested $439 million to add a new paint shop and to improve other portions of the Corvette facility. More importantly, these investments directly created 316 new jobs in Kentucky.

While some insist that the performance car war is coming to an end, General Motors continues to invest big money in the future of the all-American sports car.