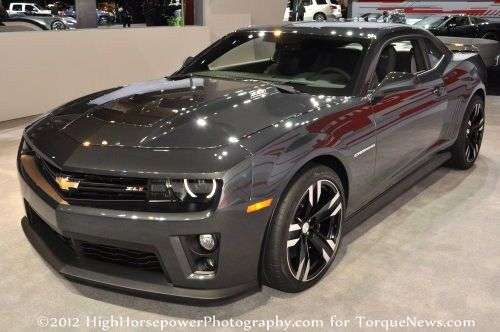 General Motors has announced a new sweepstakes where one lucky winner will win a trip to the Indy 500 and a 2013 Chevrolet Camaro ZL1 – and all that you have to do is sign up on the new site WinCamaroZL1.com.
Advertisement

General Motors has dubbed this new contest the “Get the Gift of Speed Sweepstakes” and the winner will receive a 2013 Chevrolet Camaro ZL1 along with an all expenses paid trip for two to the 2013 Indianapolis 500. All you have to do is visit WinCamaroZL1.com where you will be asked three multiple choice questions pertaining to the ZL1 including a question about the ZL1 Coupe’s Nürburgring time, one about the magnetic ride control system and one about the new performance traction management system. They’re all pretty easy with a little reading up on the super muscle car. Once you have answered those three questions correctly, you will be taken to another screen where you will be asked all sorts of personal information including your address, when you plan to buy your next vehicle and what GM vehicles you would like to learn more about.

Finally, you can earn a second entry to win a new Camaro ZL1 by following the @TeamChevy Twitter handle and Tweeting the phrase below:
#WinCamaroZL1 www.WinCamaroZL1.com. Click the link to register for a chance to win a 2013 Camaro ZL1 Official Rules http://bit.ly/IJhTHE.

So, provided that you have internet and a Twitter account, you can earn yourself two entries into the Chevrolet “Get the Gift of Speed Sweepstakes” to win the 2013 Camaro ZL1 and a trip to the Indy 500. The sweepstakes starts today and runs until July 9, 2012 at 11:59pm EST with the winner being selected on or around July 20th, 2012.

The sweepstakes rules don’t state whether the winner gets a 2013 Chevrolet Camaro ZL1 coupe or convertible but the rules do state that the prize vehicle has an approximate retail value of $58,000 so while the official price of the Camaro ZL1 Convertible hasn’t been announced – it could very well fit within that budget. The winner of the sweepstakes will be able to pick their exterior color as well as any upgrades – although the winner will have to foot the bill for those add-ons. Even if only given the “base” Camaro ZL1 Coupe, I would be more than ecstatic to win such a prize as with 580 horsepower, 556lb-ft of torque and one of the most advanced suspension systems ever found in a muscle car…the Camaro ZL1 is one of the most amazing American cars ever built.

In addition to the 2013 Chevrolet Camaro ZL1, the winner of this sweepstakes will also get a trip for two to the 2013 Indy 500. This includes coach class airfare for two, four days and three nights in an Indianapolis hotel, two tickets to the Indy 500 and $800 travel allowance. The approximate retail value of this Indy 500 trip is $6,750. When combined with the new Camaro ZL1, this prize package packs a total value of almost $65,000.

Click here to check out www.WinCamaroZL1.com for your chance to win the awesome new 2013 Chevrolet Camaro ZL1 and a trip to the 2013 Indy 500!

TM wrote on October 9, 2012 - 3:37pm Permalink
What a scam Nascar will do anything for money. You apply for the contest to win a camaro and give all your information. Then the next day you are swamped with phone calls and e-mails with all kinds of idiots calling you with there scams. Its just another way for them to sell your information. Who will win it some nascar scam employee. Never again will I apply for this bull shit.
TM wrote on October 9, 2012 - 3:39pm Permalink
SCAM