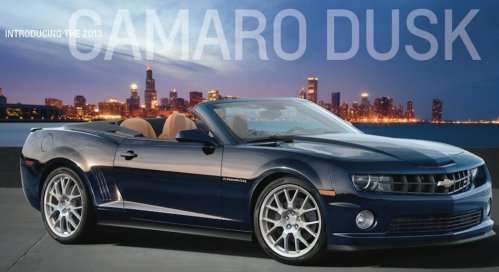 General Motors has announced that for the 2013 model year, the Chevrolet Camaro Coupe and Convertible will both offer the new Dusk trimline package – adding style inside and out to the newest model year of the GM muscle car.
Advertisement

The 2013 Chevrolet Camaro Dusk package is available on the Camaro Coupe or Convertible, specifically those fitted with the 2LT or 2SS trimlines –making the Dusk package an upgrade to the premium V6 and V8 Camaro models. This package first appeared at the 2009 SEMA Show as a concept car but like so many of the accessory-clad packages that debut at SEMA – the Camaro Dusk has become a production reality.

On the outside, the 2013 Chevrolet Camaro Dusk begins with a unique Blue Ray Metallic exterior paint and a matching blue cloth top for Convertibles. Next, GM adds a set of bright silver 21” aluminum wheels wrapped in Pirelli high performance tires measuring 245/40ZR21 up front and 275/35ZR21 out back and components of the RS Appearance Package including the halo projection style headlights, the front fascia splitter and the lower rocker panel skirts finish off the exterior portion of the package.

Inside, the 2013 Chevrolet Camaro Dusk features a bright interior with Mojave leather with yellow stitching (a similar design to that seen on the high end Neiman Marcus Camaro) on the seats, the shift knob, the steering wheel and the arm rests (door and center console). Blue Ray Metallic door panels and other accent pieces around the cabin work to connect the interior and exterior while Blue Ray Metallic and more Mojave leather appointments reach across the dash and into the instrument panel. The interior is finished off with Ice Blue ambient lighting and a set of premium floormats. Also, those Camaro Dusk models equipped with a manual transmission also receive a Hurst short throw shifter as part of the package. Of course, the 2013 Camaro Dusk interior also features all of the amenities found on the standard Camaro 2LT and 2SS.

General Motors is taking orders right now for the 2013 Chevrolet Camaro Dusk Coupe and Convertible with production scheduled to run from August to December. It should be noted that the production run of the Camaro Dusk models is based on time and not production numbers so if you want to get your hands on one of these sporty new Camaros – it might be a good idea to head to your friendly neighborhood Chevrolet dealership and place your order quickly. Regardless of what style Camaro is chosen (coupe or convertible, automatic or manual transmission), the Dusk package carries an MSRP of $5,995.

At $6,000, the 2013 Chevrolet Camaro Dusk package likely isn’t something that every Camaro buyer is going to want as it is strictly an appearance package that adds more luxurious leather appointments throughout the interior. However, for those new Camaro owners who want a truly unique American muscle car, the Camaro Dusk does a nice job of adding a touch of luxury and uniqueness to the top of the line V6 and SS Camaro Coupe and Convertible.

LG's New EV Battery Plant Is a Welcome News for Tesla
Tesla Giga Berlin's New Hurdle: It's Not Only the Gov't, but Now Tesla Itself
END_OF_DOCUMENT_TOKEN_TO_BE_REPLACED