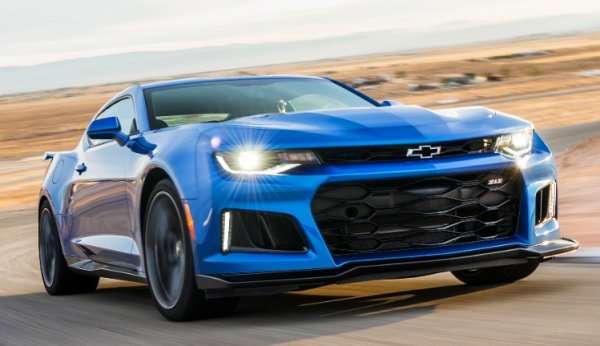 General Motors announced yesterday that they will be adding 220 jobs at their Romulus Powertrain Plant to build the new 10-speed automatic transmission which will be found in the Chevrolet Camaro ZL1 and other future models.
Advertisement

President Donald Trump visited the Detroit area yesterday and with his headlining push for more American manufacturing jobs, General Motors made an announcement that they would be adding or preserving more than 900 jobs in Michigan. The majority of those 900 jobs are “retained”, but 220 of them are new jobs at the Romulus Powertrain Plant, where GM will build the new 10-speed automatic transmission for the Chevrolet Camaro ZL1.

“The job commitments announced today demonstrate the confidence we have in our products, our people and an overall positive outlook for the auto industry and the U.S. economy,” said GM Chairman and CEO Mary Barra.

Building the New 10-speed for the ZL1
The new Chevrolet Camaro ZL1 is the first vehicle from General Motors to feature their new 10-speed automatic transmission. This gearbox was developed in cooperation with Ford Motor Company, and this transmission will be similar to the unit at work in the new Ford F150 Raptor and the 2018 Ford Mustang. Although the two American automakers worked together on the development of this transmission and they will both be using some variation of it in multiple vehicles, both companies are going to handle production internally.

The 2017 Chevrolet Camaro ZL1 is the first GM vehicle to be offered with this new 10-speed transmission, and the company will build these high performance gearboxes at their Romulus Powertrain Plant. Right now, the 10-speed is only being used in the relatively low volume ZL1, but with plans to use it across a wider selection of vehicles in the near future – the demand for these new units will soon be much higher than they are right now. When that time comes, the Romulus plant will need more workers to build these transmissions, so in preparation for the increased 10-speed production volume, GM will add 220 new jobs at that facility.

Retained Jobs in Lansing and Flint
In addition to the 220 new jobs being added to build the Camaro ZL1 10-speed in Romulus, this statement outlined two other manpower moves which will retain current positions from the Lansing Delta plant. Lansing Delta had originally announced a drop of the third shift when the new GMC Acadia production was moved to Spring Hill, Tennessee, which (in theory) would lead to a reduction in the number of jobs at the Lansing plant. However, to build the newest Chevrolet Traverse and Buick Enclave, 500 of those jobs previously in jeopardy are safe at the Lansing Delta plant.

Also, roughly 180 of the workers from the Lansing Delta plant will be transferred to the Flint Assembly Plant where they will help build the Chevrolet Silverado HD and GMC Sierra HD trucks.

The bottom line here is that roughly 680 of the workers from the Lansing Delta Township who were concerned about their job security can sleep a little easier, as 500 of them will stay on at Lansing Delta while another 180 will be building trucks in Flint – plus 220 new jobs to build the 10-speed Camaro ZL1 transmission. In total, 900 new or retained jobs shows that GM is doing its part to work with President Trump to make America great again.