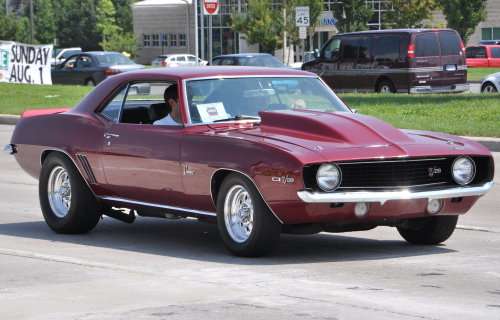 General Motors has once again filed for a trademark of the name Z28 – sending the automotive media and Camaro enthusiast world into a frenzy of what is coming next to the Chevy muscle car with discussions suggesting that the Z28 name could replace either the Camaro ZL1 or Camaro SS trimline in the near future.
Advertisement

I should start by pointing out that it is not unusual for an automaker to trademark a certain name just to prevent other, competing automakers from using that name on their own vehicles so GM’s move to protect the fabled Camaro Z28 name could be just that – an attempt to protect it from other companies. However, discussions around the automotive world suggest that GM could be procuring the Z28 name for a variety of other possible (and much more interesting) reasons.

Option #1: The Camaro Z28 could replace/join the Camaro ZL1
The Chevrolet Camaro ZL1 is arguably the most incredible American muscle car (or pony car, if you prefer) ever but while the ZL1 is the fastest factory Camaro ever – it is fitted with a variety of features that offer more comfort than performance. Features like the comfortable leather seats, the large infotainment display and the hi-fi sound system are impressive but they are also features that add weight without improving performance. Previous to the unveiling of the Camaro ZL1, many expected that this super-Camaro would be called the Z28 and even after the ZL1 debuted – rumors continued that there was also a Z28 on the way. Many believe that the Z28 will either replace the ZL1 or join the ZL1 in offering the same drivetrain and body features that make it an incredible performer but without the unnecessary gadgets of the ZL1.

Today I spoke with Steve Geers, administrator of the online Camaro enthusiast group at CamaroForums.com, and he offered his thoughts in what we could expect from the Z28 after speaking with both GM engineers and long-time Camaro faithful. “I think that the Z28 will replace the ZL1, as the Z28 name is far better recognized as a high performance Camaro. The ZL1 name is known as a performance package within the Camaro community but to the general public – Z28 is far more recognizable than ZL1”, said Geers. “The Z28 could feature the supercharged 6.2L V8, the high tech suspension system, the high performance Brembo braking package and the exterior features of the current ZL1 but with a more bare-bones interior; focusing more on performance through weight reduction. The Camaro Z28 could also receive a jump in horsepower to help it compete more closely with the 662 horsepower Ford Shelby GT500 but he pointed out that the Camaro Z28 will have to leave a power gap between itself and the Corvette ZR1.”

The ZR1 has 638 horsepower right now so the Camaro Z28 serving as a replacement to the ZL1 could see a jump in power to the range of 600-625hp without stepping on the toes of Corvette owners. Perhaps GM could keep the ZL1 in its current form while offering a lighter and slightly more powerful Z28 to satisfy both those Camaro buyers who want some luxury inside as well as those who are more concerned about going fast.

Option #2: The Camaro Z28 could replace the Camaro SS
The Chevrolet Camaro Z28 was General Motors’ top muscle car from the early 1970s until the Camaro SS returned in 1996. The Z28 and SS co-existed from 1996 through 2002 but when the 5th generation of the Chevrolet Camaro was introduced for 2010, the SS was the name given to the V8 powered Camaro models. The SS name has worked out just fine for the 5th generation of the Camaro but with the new Chevrolet SS performance sedan coming out next year, having a model called the SS and a trimline of the Camaro called the SS – it could confuse some consumers. Because of the historic value of the Camaro Z28 name and the upcoming SS performance sedan, Chevrolet could replace the SS trimline with the Z28 name.

Option #3: The Camaro Z28 will be a new trimline based on the 1LE
When the 5th generation of the Chevrolet Camaro was introduced for the 2010 model year, many were shocked to see that there was no Z28 option, as the standard V8 package was the SS. Almost immediately after the new Camaro was unveiled, there were rumors that there would be a higher performance Camaro Z28 on the way but when the ZL1 was introduced – those plans were seemingly dashed. However, rumors continue to fly that the new Camaro Z28 could be something similar to the Camaro 1LE (a handling performance package for the Camaro SS that is intended to compete with the Ford Mustang Boss 302).

Should the reception be strong enough for the Camaro SS 1LE, perhaps General Motors will introduce the new Camaro Z28 that will feature the modifications included in the current 1LE package while also adding a touch more power to help compete with the Boss 302. The Boss makes 444 horsepower while the 1LE makes 426 horsepower so a slight jump in power during the transition from 1LE to Z28 could make for a better combatant for the modern Boss. Perhaps GM would go so far as to equip the new Camaro Z28 with the magnetic ride control system from the ZL1 while sticking with the naturally aspirated 6.2L V8.

Option #4: The Camaro Z28 could be an all-new trimline
Unfortunately, since the Chevrolet Camaro family has grown so much since being introduced for 2010, there really isn’t much room for an all-new trimline sporting the Z28 name. Some seem to think that the Z28 will nestle into the Camaro lineup with V6 (LS and LT), SS, 1LE, ZL1 but it is hard to imagine what that new trimline would be. There are discussions about the Z28 joining the above lineup but in the long run – a “new” trimline would really be little more than a modified version of the one of the current options.

Again, this speculation could all be for not if GM has just trademarked the Z28 name to prevent another automaker from using it but the options above present a spread of very interesting possibilities that could help the Camaro continue to be one of the top dogs in the American performance segment.