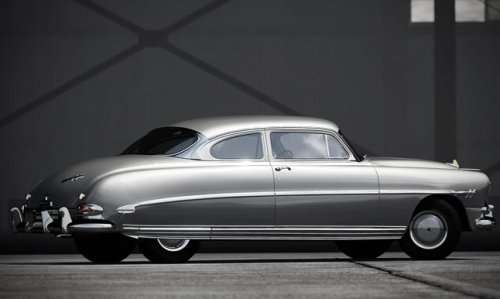 The July Car Pack for Forza Motorsport 4 heads back to the old, old school beginning with the 1952 Hudson Hornet. Shy of an appearance in the Disney Pixar movie Cars, few young automotive enthusiasts are likely to recognize the Hudson name due to the brands demise in 1957 but the Hornet was one of the supreme performance cars in its day. There are two more cars from the 1950s that have unquestionable performance routes but the 1954 Jaguar XK120 and the 1956 Lotus Eleven each do performance in a very different way from the Hudson Hornet.

Next, the Forza 4 July Car Pack jumps up to the 1970s with the funky little 1973 AMC Gremlin X. The Gremlin X was a performance themed model based on an economy car in an effort to battle the then-new Japanese compacts models. Sadly, the Gremlin X didn’t pack any additional power but it certainly looked the part of a sports car.

The FM4 July Car Pack then moves into the 1990s with a pair of European supercars. First, the 1995 RUF CTR2 packs a unique RUF look and performance to boot while the 1998 Aston Martin V8 Vantage V600 packs 600 horsepower and 600lb-ft of torque via a twin supercharged V8 – making it one of the most powerful cars of its time.

The final four cars featured in the July Car Pack for Forza 4 are all modern models beginning with the 2011 McLaren 59 GT MP4-12C GT3. This race-only model has helped launch the McLaren brand back into the racing world even though it actually packs less power than the MP4-12C road car. Next, the unique Ascari KZ1R packs BMW power in this lightweight carbon fiber chassis with body dressings to make it more track friendly. The 2012 Spyker C8 Aileron seems like an odd addition considering the questionable future of the Spyker brand but the company reportedly hopes to get back into LeMans racing in the GT2 class with this new Aileron. Last but certainly not least is the 2012 Mercedes Benz SLK55 AMG – one of the top performance coupes from the Daimler performance division.

The July Car Pack is available in the Xbox Live Marketplace right now with a standard car pack price of 560 MS points ($7 US Dollars). In addition to the 10 new cars, those who purchase the July Car Pack will gain access to a unique monthly rivals event that allows only stock McLaren 59 GT MP4-12C GT3 models. There is also an event set up strictly for 1970s models, into which the ’73 Gremlin X fits right into.

My personal favorite from the Forza 4 July Car Pack is the 1952 Hudson Hornet which I have found makes for a pretty solid C 425 car – while doing so with gobs of 50s era styling and class.