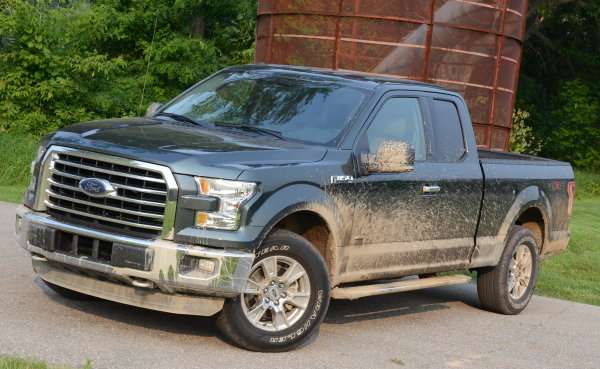 Ford Motor Company has just announced their sales totals for December 2015 and the entire 2015 calendar year and with 85,211 F Series trucks sold in December – Ford saw its best monthly truck sales in more than a decade. So much for Americans shying away from aluminum trucks.
Advertisement

Over the course of the 2015 calendar year, Ford was plagued with delays in building and delivering the 2015 F150, but the Motor Company ironed those issues out to finish the year very strong. In fact, December was the first time in more than ten years where Ford sold more than 85,000 trucks in a single month and while the company doesn’t offer a breakdown by truck class, the F Series generally accounts for more than half of Ford’s monthly truck sales.

In other words, now that Ford has finally gotten a proper stock of new aluminum bodied F150 pickups to dealerships all over the country, sales numbers are exploding.

“December capped off six straight months of year-over-year sales gains for F-Series, with strong increases coming from both retail sales and the strength of commercial fleet orders, as we closed out 2015,” said Mark LaNeve, Ford vice president, U.S. Marketing, Sales and Service.

Amazing Monthly Sales Broken Down
December was, as usual, a shorter month for auto dealerships around the country due to Christmas falling on a weekday. Dealerships had 26 selling days last month and in many cases, the sales crews worked unusual hours, but for the sake of discussion, let’s assume that every Ford dealership in America was open for 12 hour days for those 26 selling days in December.

With 85,211 Ford F Series pickups sold in December over the course of 26 selling days, Ford sold 3,277 trucks each day last month. When you break it down by hour, based on 12 hour work days, Ford sold 273 new trucks every working hour last month and that leads to 4.55 trucks per minute.

Mind you, this is the same truck that the critics insisted would not sell because the consumer market wouldn't stand for an aluminum bodied truck. Not surprisingly, many of those same people were wrong when they insisted that the EcoBoost V6 wouldn't work as a premium half ton truck engine. Once again, Ford's critics are horribly wrong...in Ford's favor. Perhaps at some point, these outlets who constantly play devil's advocate and bash products simply to stand out from the crowd will give up being wrong simply to be different. In any case, the new F150 is killing it in the sales reports.

Another Big Year for the F Series
After getting a slow start to the 2015 sales year, the Ford F Series trucks have built momentum with the continued delivery of 2015 F150 pickups in more trims and colors around the country. As a result, Ford truck sales have grown over the past few months and this has led to a solid growth for the F Series truck in 2015. Ford was very pleased with 2014 F Series sales, when they sold 753,851 new trucks, but 2015 improved by 3.5% for a total of 780,354.

Once we have sales numbers from every company and I have put together the official list of the bestselling vehicles in America, you will find it here on TorqueNews.com. Stay tuned!

Contheon wrote on January 5, 2016 - 6:54pm Permalink
So, Ford reports "sales" in the US when the trucks ship to it's independent dealers. But evidently, you are actually reporting real sales to retail customers. It's an amazing breakthrough, and one that's been too long coming. For years, Europe has reported sales and real customer registrations. This confusion has gone on too long. Congratulations Torque News !!!
Patrick Rall wrote on January 6, 2016 - 9:36am Permalink
The numbers that I use are based on customer deliveries rather than units shipped. Most companies doing business in the US offer both, but some have moved to just announcing actual sold units.