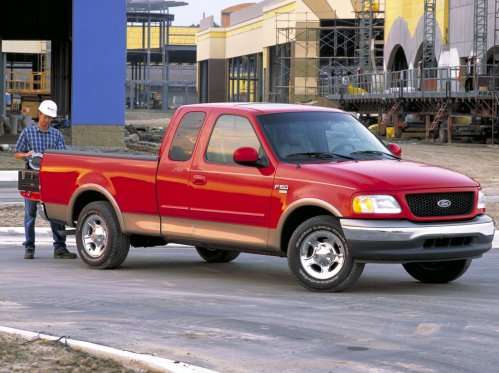 Ford Motor Company and the National Highway Traffic Safety Administration announced today that they would be recalling around 1.1 million pickups, including their top-selling F150, for a risk of the fuel tank straps corroding and breaking.
Advertisement

The 1.1 Ford and Lincoln trucks being recalled include certain 1997-2004 F150 pickups, 1997 -1999 F250 models with a gross vehicle weight rating less than 8,500lbs, 2004 F150 Heritage models and 2002-2003 Lincoln Blackwood pickups. Not only does this recall specifically apply to those trucks built between June 20th 1995 and August 4th, 2004, but it also specifies that this new Ford truck recall applies to trucks originally sold or currently registered in Connecticut, Delaware, Illinois, Indiana, Iowa, Kentucky, Maine, Maryland, Massachussetts, Michigan, Minnesota, Missouri, New Hampshire, New Jersey, New York, Ohio, Pennsylvania, Rhode Island, Vermont, West Virginia, Wisconsin and Washington DC. If you live in one of the other 29 US states and your truck has never been to any of those states – your truck might be ok and it will be excluded from the recall. However, in those states mentioned above, testing has found that prolonged exposure to road de-icing chemicals (presumably the dreaded road salt) causes these metal straps to rust excessively fast and when they get bad enough – they will break. When one strap breaks, your gas tank will hang much lower than usual and when the second strap breaks from similar corrosion complicated by the extra stress added by the first strap breaking…it is also likely to break.

Once both fuel tank straps of your F150, F250 or Lincoln Blackwood break, the fuel tank is free to drop to the ground with only the fuel lines holding the tank to the vehicle. When this happens, the impact of the tank to the ground can cause the tank to crack and leak and the amount of friction between the tank, the broken straps and the road can lead to sparks. A fuel tank leak plus sparks equals a clear safety issue so Ford is getting these 1.1 million vehicles back to dealerships for repairs.

This recall is expected to begin on or around September 12th, at which points the owners of these 1.1 million trucks will be asked to return to dealerships where new fuel tank straps with increased corrosion protection will be installed – free of charge to the customer, of course. In the event that new, extra-protected straps are not available, the dealership will add a temporary securing strap to hold the tank in place safely until the new straps are in stock.