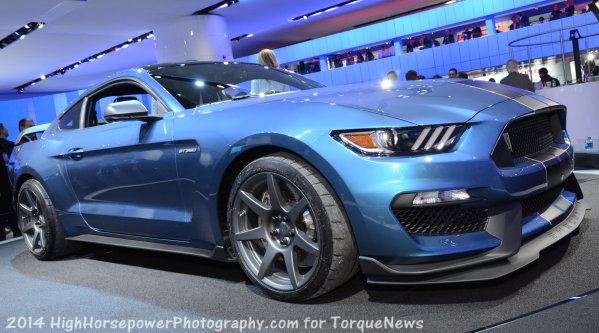 The public days of the 2015 Detroit Auto Show start tomorrow and there is a good chance that the most popular display with be that of Ford Motor Company – thanks to the debut of the new Shelby GT350R Mustang, the new SVT Raptor F150 and the newest Ford GT supercar.
Advertisement

There were a great many exciting debuts at this week’s media days of the 2015 North American International Auto Show including (but certainly not limited to) the new Ford GT, the Ford Shelby G350R Mustang, the SVT Raptor F150, the Ram Rebel, the new Chevy Volt, the new Chevy Bolt Concept, the new Toyota Tacoma, the next Lincoln MKX, the Lexus GS-F, the Audi Q7, the Cadillac CTS-V and much, much more.

However, none of the concept or production vehicles that debuted in Cobo Hall this week made as big of a splash as the trio of high performance Ford products so while no one really “wins” the auto show – there is no question that the Ford brand stole the show during media days and it will almost certainly be the star of the show when the public pours into Cobo tomorrow.

The SVT Raptor Leads a Strong Truck Class
Although the details of the new Ford SVT Raptor F150 are limited thus far, no truck at the 2015 Detroit Auto Show has gotten as much attention as the mighty Raptor. The Toyota Tacoma will likely be the bestseller of the group of trucks to debut this week and the Ram brand stole some attention from the green crowd with their new HFE package that offers 29 miles per gallon on the highway – but neither of these trucks are as critically acclaimed as the new F150 Raptor. The 2017 Ford F150 SVT Raptor is powered by a new SVT-tuned EcoBoost V6 that is promised to deliver more power than the outgoing Raptor, which pulled 411 horsepower and 434lb-ft of torque from the 6.2L V8. Once the actual figures for the new Raptor are announced, there is a good chance that this off-road ready F150 will be the most powerful truck in the half ton segment.

The Ford Shelby GT350R Mustang Brings Added Performance
The new Ford Shelby GT350 Mustang has been the talk of the pony car town since it debuted last year in LA, but at the 2015 Detroit Auto Show, Ford rolled out the new “R” version of the latest Shelby Mustang. This new Shelby GT350R Mustang could very well knock off the Camaro Z/28, which would make it the best handling pony car of all time. Like the Raptor, we don’t know exactly how much power the new GT350R will have when it hits showrooms, but Ford is promising figures over 500 horsepower and 400lb-ft of torque.

The Ford GT is the Next Great American Supercar
Dodge has the Viper, Chevrolet has the Corvette Z06, but for almost 10 years, Ford Motor Company has not had a proper supercar to compete with the crosstown rivals – or the European exotics. That all changes with the 2016 Ford GT, which brings back the mid-engine design to the American auto industry in a sleek, sexy supercar. We knew that the new Ford GT supercar was coming, but no one really expected that it would be powered by a similar 3.5L EcoBoost V6 to what is used in the Ford F150, the Taurus SHO and other FoMoCo vehicles. Again, there are no solid power numbers for the new GT, but the automaker has promised that it would pack at least 600 horsepower and with the low curb weight of the aluminum and carbon fiber beast, that should be enough to allow the newest Ford supercar to compete with the best from Dodge and Chevrolet. So, while there is no official winner for any auto show, the collection of high performance vehicles from Ford Motor Company stole the show during the media days and that trio will almost certainly have the same impact when the public hits the show floor tomorrow.

Tesla Contemplates A New Strategy for China Retail even As Sales Boom
Jay Leno on Elon Musk & EVs: “I Think He Should Get ... Credit"
END_OF_DOCUMENT_TOKEN_TO_BE_REPLACED