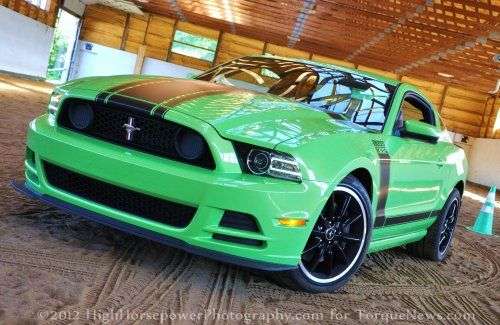 Just when it looked like the Chevrolet Camaro would cruise to the end of the year to win the sales title among the American muscle cars for 2012, the Ford Mustang battled back in October 2012 to lead the segment and close the gap a bit between the Ford and Chevy muscle cars.
Advertisement

The Ford Mustang battled hard through the summer to close the gap between itself and the Chevrolet Camaro but when the Camaro put a stop to that attack as the GM muscle car was the top dog in sales for both August and September, it appeared as though the Camaro was surely on its way to lead the segment for the third straight year. However, the Ford Mustang faithful stepped up in October 2012 and helped Ford claim the monthly title while narrowing the gap between itself and the Camaro.

In October 2012, Ford sold 5,328 examples of the Mustang coupe and convertible which accounted for an 8.8% improvement over the same stanza last year. The Mustang was the only one of the three American muscle cars to post positive growth in October and with over 5,300 units sold – the Mustang beat out the Camaro and Challenger in monthly sales. On the year, Ford Motor Company has sold 72,149 examples of the mighty Mustang which accounts for an improvement on the year of 17% compared to the first 10 months of 2011. This growth of 17% during the first 10 months of 2012 makes the Ford Mustang the strongest model in the segment in terms of growth.

The Chevrolet Camaro moved 5,122 units in October 2012; a decrease of 16.3% compared to October 2011 and few enough units that the Camaro let the Mustang claim its 5th monthly sales title of the 2012 year. Overall, Chevrolet has sold 74,090 Camaro coupes and convertibles during 2012 which accounts for a drop of 3% compared to last year but for the time being, that figure is enough to set the Camaro on the path to lead the segment for the entire year.

Finally, the Dodge Challenger posted a rare drop in sales as the brawny Mopar muscle car sent out just 2,686 new coupes last month. This marks a drop of 13% compared to the same month one year earlier but on the year, 36,309 Challengers sold still gives the Chrysler Group’s muscle car an overall increase in sales of 9% compared to the first ten months of 2011.

At this point, the Ford Mustang and Chevrolet Camaro are so close to each other in price, performance, package offerings and efficiency that buyers are most commonly picking based on their own basic opinions. When the Camaro posted big annual wins each of the last two years, the LS3 V8 in the Camaro presented a reasonable advantage over the Ford Mustang but Ford fixed that problem when the Mustang began drawing its power from the new 5.0L Coyote V8. However, that didn’t stop the Camaro from leading the segment last year so Ford knew that it would be a tough battle to prevent the Camaro from leading the class three years in a row. On the year, the Mustang has led five months while the Camaro has been the top dog in the other five months with the Mustang posting the strongest month in terms of sales volume for the class in May with 10,427 units sold. However, the consistent sales levels of the Camaro have allowed the GM muscle car to maintain a lead throughout the year.

For the Ford Mustang to beat the Chevrolet Camaro for the 2012 year, Ford would have to sell roughly 1,000 more units than the Camaro each of the last two months. Considering the fact that the American Snow Belt is expecting a rough year in terms of winter weather, muscle car sales will likely drop significantly in November and December so it will be very hard for the Mustang to take the lead before the end of the year. However, stranger things have happened so we won’t be counting the Mustang out until we have celebrated the New Year.