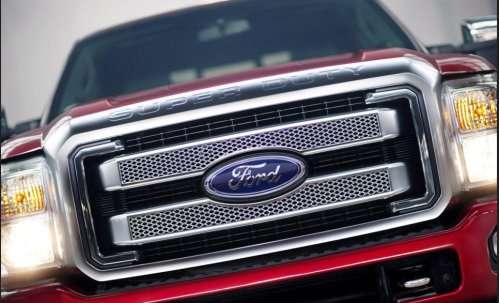 One week ago, Ford Motor Company issued an image of what was clearly a pickup covered by a sheet with the promise that there was a new trimline of their heavy duty truck lineup coming and today, the world was introduced to the 2013 Ford Super Duty Platinum – a truck with all of the capabilities of the Super Duty lineup combined with luxury amenities.
Advertisement

The new 2013 Ford Super Duty Platinum is available strictly in the Crew Cab configuration but buyers can select the F250, F350 or F450 models equipped with either the 6.7L PowerStroke diesel engine or the 6.2L gasoline powered V8 and rear- or four wheel drive. In short, shy of the choice of other cab options, the 2013 Super Duty Platinum offers all of the customization and capabilities of the current Super Duty lineup while adding a luxury feel.

"The F-Series Super Duty Platinum is the latest expression of Built Ford Tough truck luxury," said Brian Rathsburg, F-Series Super Duty Marketing manager. "It has a distinct appearance and a long list of features to deliver a superior experience. Along with that, it has all of the capability F-Series trucks are famous for."

On the outside, the 2013 Ford Super Duty Platinum includes a variety of additions that give this hearty truck a classy look, beginning up front with the model-specific grille featuring a satin chrome surround highlighted by perforated mesh in the bold center bars. Below this new grille treatment is a body colored bumper cover with chrome tow hooks poking out from a black background. Along the sides, the Super Duty Platinum adds chrome door handles, chrome mirror caps, chrome running boards, chrome dual exhaust tips and ‘Platinum’ in chrome lettering on the bedside. This all comes in addition to the standard chrome bits found on the typical Super Duty, including the large PowerStroke badge on the front doos (for vehicles equipped with that engine) and the model designation “vent style” badge located where the fender meets the hood. Out back, the tailgate is trimmed with the same satin chrome appliqué that is found on the F150 Platinum and the exterior of the package is finished off by a set of new 20” wheels, featuring a 7-spoke design in polished aluminum with chrome center caps. The 2013 Super Duty Platinum package is available in five exterior colors - Ruby Red (shown in the images on the right), Kodiak Brown, Tuxedo Black, Ingot Silver and White Platinum.

Inside, the 2013 Ford Super Duty Platinum really packs the in the luxury, beginning with premium leather seats in the front and back with that same plush leather on the door mounted armrests and center console armrest. The front seats offer power controls along with heated and cooled surfaces with the leather wrapped steering wheel also offering a heating feature for those brisk mornings. Ford has added dark wood grain appliqués to the steering wheel, instrument panel, center stack to complete the classy interior layout and buyers can select from Pecan or Midnight Black interior finishes.

The key feature inside of the 2013 Ford Super Duty Platinum is the new SYNC with MyFord Touch, which has been specifically designed for the new Super Duty. This system features the large touch screen found on other MyFord Touch systems but to accommodate those who might be wearing work gloves while driving their Super Duty Platinum, there are also large, easy to use knobs that control the infotainment system when the touchscreen isn’t convenient. Like other vehicles, MyFord Touch includes a state of the art stereo system with satellite, MP3, AM/FM and CD compatability and an advanced navigation system; as well as controlling the climate control and heated seats.

Finally, the 2013 Ford Super Duty Platinum packs all of the goodies that make life easier found on the other high end Ford trucks, such as an integrated trailer brake controller, adjustable pedals, a rear view camera, remote start and power mirrors that telescope and fold in for tight parking spaces.

Ford has not announced pricing for the 2013 Super Duty Platinum but with availability slated for later in 2012 – pricing should be announced over the next few months. The Platinum will likely ring in a bit higher than the King Ranch, which is the current top of the line for the F250, F350, and F450. The King Ranch starting price ranges from $47,185 for the F250 equipped with rear wheel drive and the 6.2L gasoline engine to $64,030 for the F450 which comes only with the 6.7L PowerStroke diesel and 4 wheel drive – so the price of the Super Duty Platinum will likely start in the low $50k range for the F250 with a price in the high 60s for the loaded up F450.

Toyota's First EV Will Have a Name of BZ: Toyota BZ
First Videos From Inside The Boring Company's Las Vegas Loop
END_OF_DOCUMENT_TOKEN_TO_BE_REPLACED