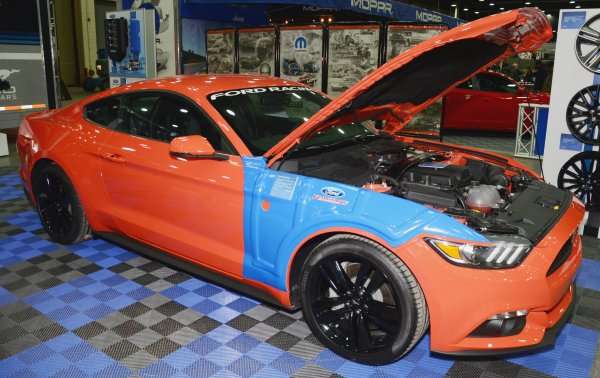 The 2015 Ford Mustang is an impressive machine for a variety of reasons, but in an effort to make working on your the next gen Mustang even easier to work on for private owners, Ford Racing has offered up one of the coolest fender covers I’ve seen – featuring the same design as the fender guards used during production at the Flat Rock plant.
Advertisement

Now, I understand that a fender cover is way down the list of cool innovations in the 2015 Ford Mustang, but this fender cover is just the latest in great ideas that will certainly sit very well with Mustang owners. This isn’t really a modification for the 2015 Mustang, but for new Mustang owners who work on their own vehicle at home, this fender cover is one of the best I’ve seen in the industry, with a form-fitted design that has been borrowed from the design that is used during Mustang production to keep the paint pristine as it moves along the assembly line.

The Ford Racing 2015 Mustang Fender Cover
When the 2015 Ford Mustang (and most other new cars and trucks made in America) move along the assembly line, a great deal of work is performed after many of the major painted body panels have been added and during those finishing touches, there are plenty of opportunities to ding up the crystal clear exterior paint. To prevent belt buckles, zippers, tools or any machinery from scratching the paint, Mustangs with their fenders installed have padded, form-fitted covers are installed on the car through the final phases of production.

Unlike your average fender cover that just lays over the fender, sliding around and occasionally falling to the floor, forcing you to stop what you are doing to fix the protectant layer of cloth, the Ford Racing 2015 Mustang fender cover is molded foam that is designed to sit perfectly flat against the entire fender of the car. The top of the cover extends over the upper edge of the fender and with the non-slip backing, these fender covers are good enough to be used on every single Mustang built at the Flat Rock plant – so they are clearly an ideal feature for private owners who like to work on their own cars.

In addition to being very sturdy and fitting perfectly, the Ford Racing molded fender covers for the 2015 Mustang are just plain cool. They’re molded in bright blue with the Ford Racing logo right in the middle, so for someone who likes to be a little flashy when wrenching on their Mustang, these fender covers are a must-have.

The only downside to the Ford Racing fender covers for the 2015 Ford Mustang is the cost. Since they are form fitted, you will need one for each side so they are sold in pairs. One pair will run you $325 MSRP, so compared to your average square cloth fender cover that come five in a pack at your local parts store, these are expensive. However, when you consider how well these fender covers fit and protect the body of your Mustang compared to the cloth one size fits all covers, it is money well spent.

LB Corney wrote on March 9, 2015 - 11:54pm Permalink
Ha... those heavily padded covers have been used in Ford factories for years... All new cars get them after the bodies are painted, and then they are recycled again to the start of the assembly line.. They are there to insure that no way, no how can the paint be scratched or damaged when your new car is built.